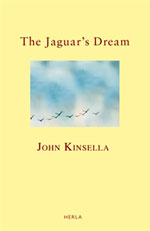 the end allowing no closure and adulated

The Jaguar’s Dream is a collection of ‘cover’ poems by the celebrated, and prolific, John Kinsella. The poems covered by Kinsella all originate in languages other than English – gestating in mother tongues as diverse as Latin, French, German, Russian, Chinese and others, before fusing with Kinsella’s own ‘Wheatbelt Western Australian, mid-Ohioan, and Cantabrigian English.’ Cover, interestingly, is also a verb meaning to mate, particularly of a stallion to a mare: the poems are similarly interbreedings, by Kinsella (Western Australian English) out of Virgil (Augustan Latin). Such might be the DNA, but nurture too has its place; Kinsella writes that his ‘own biography and experience necessarily inform[s] their references, conceits and dynamic equivalents.’ The poetic progeny of such couplings are, unsurprisingly, not predictable translations, but rather, as the subtitle makes clear, ‘Translations, Adaptations, Versions, Extrapolations, Interpolations, Afters, Takes and Departures.’

‘Crawlers’ metamorphoses the verb into the noun, while the strangeness of the word echoes the work of ‘things’ in emphasising the distance of human and insect. Kinsella also performs a subtle remaking; his line (‘crawlers fed by the dark earth’) retains a hint of threat, but adds the sense of ‘dark earth’ as fertile black soil that produces food. The beauty of the phrase ‘the sea’s dark syntax’ lies not only the entanglement it suggests, but the way that, by referencing the mental construct that is syntax, Kinsella brings to fruition the sleeping metaphor of the sea as the unconscious, a dreamy trope itself ripened by the poem’s subject of sleep. ‘Dark syntax’ also picks up the collection’s larger investigation of language itself as the poet’s unconscious, the ‘dark syntax’ that is the submerged portion each poet’s iceberg of talent.

Of course, all translations must prune in order to bring forth new fruit. The word ‘dormant’ works wonderfully in the context of the poem as an opening to the collection, being sleepily reawakened by the doubling of the French root ‘dormir’ (to sleep) within itself – yet retaining the possible threat of ‘dark earth’ by hinting toward sleeping (volcanic) threats. ‘Dormant’ holds the experiences at a distance, however, forcing a passive construction that, though arguably appropriate, seems to lose the brooding immediacy of sleep.

In other instances, Kinsella takes off from an impression of a poem or from a line. Virgil’s Aeneid provides the following starting point: ‘These then shall be names, now they are lands without names.’ Kinsella’s response ‘The Great Pacific Garbage Patch’ traces linkages between technology and colonialism and capitalism:

The lines reflect a slight tendency in some poems – often deployed potently, though sometimes not – of relying on strings of dense phrases that overwhelm coordination, defeating the levering and articulation of verbs and syntax. When the poems avoid the personal, the phrase strings can scatter, as though the vernacular speaking voice provided the thread that holds these jewelled phrases together. At times, particularly where Kinsella is thoughtful and conceptual rather than playful and visceral, the lack of speaking subject brings a slippage of energy. The lines can lack the power to leap the synaptic and sematic gaps, to drive us forward over the inevitable flagging of working memory. Such lapses are rare, however, and are perhaps the inevitable cost of a mind that distils so much into single phrases.

Later in the book, Kinsella shifts his attention to poets closer in time. Luminaries like Baudelaire and Rilke are covered; others like Charles Cros and Leconte de Listle are, at least for this reader, discovered. Some poems are sensitive, if personal, translations; at other times the source text launches new poems that quickly jettison the booster rockets of the source material to trace new trajectories and explore a cosmos of their own. Perhaps most intriguingly, from an intertextual perspective, are those pieces which manifest themselves as transpositions of the source into an alternative dimension. ‘Zone (Echidna): A Take on Apollinaire’ insists that Apollinaire’s urban pastoral address its own grounding on earth—an earth shared with the pre-pastoral echidna. Kinsella’s poem registers both the wordlike, though unworded, reproach of the echidna, but captures also the human impulse to render down the natural world into generic ornamentation, to co-opt the more than human to our purely human ends:

The Jaguar’s Dream does no one thing; it is by turns a book of translations and a book of original poems. Heterogeneous, it fails, perhaps, to educate a reader in its own proper way of reading; but this book, written over a period of fifteen years, is not about a singular achievement as much as it is about exploration. The achievement is not monumental, but it is, more usefully, of moment. Here and now, Kinsella arouses, satisfies, but never satiates our desire to embrace the otherness of languages, places and poets, to immerse ourselves in the ‘sea’s dark syntax’ of poetry.

This entry was posted in BOOK REVIEWS and tagged Aaron Mannion, John Kinsella, Virgil. Bookmark the permalink.
Aaron Mannion lives in Melbourne and is a writer, editor and academic. His research interests include nineteenth-century and contemporary literature, ordinary language criticism, intimacy and exile. His creative work has been published in Wet Ink, The Sleepers Almanac and elsewhere.