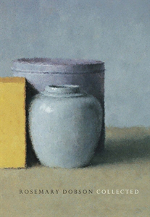 Edited by the poet shortly before her death, Rosemary Dobson: Collected reminds us not only that Dobson was one of the last Eurocentric formalists in Australian poetry, but also that her very late poems turn away from that distant, ornate tradition.

This ultimate edition contains Dobson’s eleven collections of poetry, poems published but not collected, plus a short selection from her tender and bold translations with David Campbell. Its tour of Dobson’s poetic dwelling is clear and fascinating. For no particular reason I first opened the book at its end, to find the brief and direct poems from the final four years of her life:

I then turned to the beginning of the collection and worked through the chronology of Dobson’s publications. This poem’s simple imagery and diction, even its capitalised, open-ended lines and unpunctuated conclusion, are very distant from her more characteristically complex and formal poetics. In his introduction to this collection, David McCooey emphasises Dobson’s preoccupation with the mysterious and with the past, as well as with material things. For me, however, thingness is not readily found in Dobson’s poetic world; in contrast to the late poem above, her words are more usually concerned with the idea of ‘Time’ than with the ‘present’.

That theme is formally manifest in the rhythms of the collection’s opening poem, ‘In A Convex Mirror’. Dobson plays with beats or inhalations between its stanzas, amplified by the poem’s metronomic iambs:

The rhetorical question becomes a key technique in Dobson’s exploration of time: a space where pensive query meets with silence. In her first book, In A Convex Mirror, this searching voice tends to obscure image. The poems skillfully trickle, tap and murmur over the ear, yet their concrete stuff is difficult to bring into focus, particularly when mixed metaphor abounds. The quality of disconnection in Dobson’s early work brings to mind the poetic voice of John Shaw Neilson – so often detached, both physically and metaphysically, from what it regards. Dobson’s subjects and speakers tend to occupy an unseen vantage point in place and time, from where they offer an abstract, universal point of view.

An organic extension of her formative poetry’s themes and structures, the ekphrasis poems that dominate Dobson’s second and third books are perhaps her signature poems. Responding to art history, Dobson creates omniscient voices that live both within and outside of artworks. Rather than taking a literally descriptive approach to specific works, she dramatically interprets their scenes, makers and viewers – sometimes encompassing all three at once, as in ‘Still Life’:

This is a voice to carry ideas, not subjective perception or personality: a theatrical poetics, for which the artwork’s presence provides a third, purely aesthetic dimension that the poem and poet can explore. Similarly, in homage to Robert Browning (‘Commissioned Portrait’, ‘Monumental Mason’), Dobson uses dramatic monologue to frame a voice as though it were a portrait. Even in these poems, however, she’s more interested in composition than character. Here, she is the picture-maker: