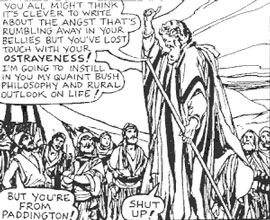 Paul Mitchell was a guest of the Melbourne Writers Festival in August this year, but only because he paid some cash to get in. While waiting for the opening session to begin, he asked himself the question: “Is Les Murray really the big man of Australian poetry? Or is he just bloody good?”

Les Murray looms large on the literary landscape. Try saying that fast. Try saying it without noticing what a pathetic joke it is at the expense of the man's size. But before you think I haven't seen The Nutty Professor and I don't know how cruel it is to be a schoolyard bully and say 'Fatty, fatty, nah, nah', take a look at the cover of Les's latest Collected Poems.

There's a picture of an elephant being embraced by a little girl. And what about the picture of Les in profile on the front cover of the recent The Quality of Sprawl? Though many years ago he took a pretty dim view of some poems that satirised his work, it seems Les these days isn't beyond a bit of self parody in regard to his image.

But onto weightier matters.

At the Melbourne Writers Festival, Les Murray made his first appearance for several years (as the advertising pointed out). In the festival's Saturday kick-off event he was in conversation with friend and poet/novelist Peter Goldsworthy (Honk if You're Jesus). He was also promoting his sprawling Collected Poems and the accompanying CD which features him reading thousands of them.

You couldn't take your coffee into the theatre which is a real bugger at ten o'clock on a Saturday morning. So I was one of several people slam dunking a latte at the entrance. Songwriter Paul Kelly and Age columnist/ABC broadcaster Sian Prior slid past in black leather and went on up the stairs. Oh, well, I thought, there must be something of greater cultural significance going on up there; something that doesn't involve boring old poetry. I thought, That's a shame, Paul's a handy lyricist, he might like to hear what Les has to say about words – and, plus, wasn't he featured in the first edition of A Return to Poetry, choosing five of his favourite poems?

So I get inside and whip up the stairs and Paul and Sian walk past me down the stairs looking for a seat in the crowded theatre. See, I told my cynical self, the man is a poet and Sian's not biased towards songwriters. Well, maybe she is a little bit.

So I sat there waiting for the big names to hit stage and looked around at all the others off-stage: Morag Fraser, Mungo MaCullum, Peter Porter, Philip Salom. There were probably others, but I wasn't looking for them. Really.

After a while, I tired of star spotting and looked at the two empty seats on the stage Les and Peter would soon fill. I gazed up at the big screen above the seats where future Writers Festival events were plugged and I realised I usually sit in these kinds of environments to watch films or live theatre or music. So why I am sitting here getting ready to listen to two blokes rabbit on about writing? Why shouldn't I just log on to a lit discussion or a site about the writing life and go to the movies instead?

I was halfway through that question in my head when Les and Peter came in and without too much fanfare, except a regal little round of applause, they got started talking about Les's life and times. And I felt like I was web surfing as soon as they got talking. Listening to Les Murray (who once described himself as a professor of idle yarning) talk is like delving into a live search engine; a catalogue of information made memorable by the lived energy of poetry. And Monsieur Goldsworthy pointed and clicked.

First, he did a search on Les Murray and Death. Les says his late '90s illness which led to time in a coma was dress rehearsal for his death. He knows he can die now, that he can do that sort of thing. He was happy to learn, too, that he wasn't the pariah he thought he'd become: too many cards, flowers and well-wishers put paid to that idea.

Other searches brought up fascinating results: Murray and Art; Murray and Australia; Murray and Poetry; Murray and Religion. He told us again that religions are poems, that we all live poems and that some (Hitler, Stalin) are more dangerous than others.

He told us that poetry is the only whole thinking. He said migrants are in no doubt as to who the 'real' Australians are; that the pipes through which we pull down the juice of life are thin and we must choose wisely which ones we decide to use.

He talked about the fact that Aboriginal Australians want him to ensure he keeps his now somewhat historically inaccurate poem, 'The Steel', in his collections. It deals with the death of his mother, and his reaction to an apparently dispassionate doctor who had failed to send an ambulance to his mother when his father requested. Murray has since learned that treatment was delayed due to his father's unwillingness to explain to the doctor that his wife was in the throes of a miscarriage. Cecil Murray didn't talk about 'women's business'; it wasn't done. He told the doctor she was having a 'bad turn'.

Aborigines want him to keep the poem doing the rounds because it highlights the problems they have in communicating their serious health issues to non-Aborigines. And he said many more of us will be Aborigines before the century's finished if we're brave enough to look honestly at our family trees.

He read poems, too. Some new ones. One where he'd taken Australian place names, a la Austen Tayshus, and run them together in an order which made them an Australian dialect, with rise and fall and rhythm and an eventual strange sense of meaning. He also read the one about the bats, where he adds 'Bat' to the other 19 languages he knows.

Goldsworthy's pointing and clicking, Murray's search results were worth being there in person to experience. Question time was really good, too. Mungo MacCallum, sitting front row (centre left) pointed out to Murray that he had a strange turn of phrase in every line. Les said that's to keep things interesting. The back of Paul Kelly's head stayed upright throughout the session, Sian Prior's kind of fell downwards as time went on. We did go an hour and a half.

Mungo MacCallum had a VB in his hand and was all smiles in the bar afterwards and it wasn't even midday. 'Twas gunna be a big festival. And no one I spoke to could explain why in the first few minutes of the Murray session there was an image of the Scooby Doo movie on the big white screen behind Murray and Goldsworthy.

Someone must have hit the wrong search engine. But if pressed I reckon Murray would have had an opinion on the movie. And as he showed in another poem he read, his 21st language is in fact 'Dog'.

This entry was posted in FEATURES and tagged festivals, les murray, paul mitchell. Bookmark the permalink.