I knew these festivals, these two festivals 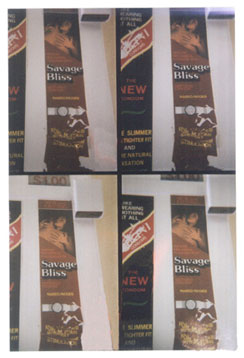 An e-mail arrived one morning inviting me to be a guest at the Mildura Writers Festival, the weekend of 1-4 August. I'd been recommended as an emerging writer.

We would love to be the first festival you get invited to!! the message read.

Of course I said yes.

I discovered who the other guests were: Peter Rose and Peter Goldsworthy. Chris Wallace-Crabbe and Jan Owen. Les Murray and David Malouf. Kerri Conway, Alan Frost, Mark Davis. Paul Kane, over from the US. Alfredo Conde, once nominated for the Nobel Prize (oh, is that all!) from Spain. The brochure laying it all out arrived while I was staying in Brisbane, and a few days later I took it over to a friend's place for lunch, having had a fit of nerves about the whole thing. Glancing through it the words of reassurance he gave me were of little help. 'Wow. Now Im really nervous for you.'

My tasks for the weekend seemed simple enough: talk to some students at one of the high schools, give a couple of readings, get up occasionally at dinner or lunch and share a poem or two for entertainment between courses. I flew up on the Thursday night and was given the key to my room at the Grand Hotel, where I sat down and tried to think hard about the weekend.

At the high school I was given year 9s to talk to. It wasn't just one class either – two classes back to back, because I was in year 9 when I had my first poem published. I'd never run a poetry workshop in my life. Everything I could remember about being in year 9 spelled horror: shoes thrown out third floor windows, girls pulling each others' very short skirts up … but in the end, they were remarkably kind as I trotted through the sort of things I'd been involved in, from zines to opera.

The weekend was a whirl of good eating and words. I found myself talking to a lovely chap who turned out to work at the consulate for Ecuador. I told him I wanted to learn Spanish in Peru, and he pressed his card into my hand and said, 'Not Peru! Ecuador! Give me a call – I'll help you out!' Eventually got ferried in for dinner and speeches and Chris Wallace-Crabbe giving a wonderful reading before rolling fat and happy into bed.

Sunday morning. I ran into Les walking down to breakfast, and we made our way into the Chandelier room together. Soon we were joined by David. So here I was, sitting over grilled tomato on toast in the Chandelier room of the Grand Hotel, Les Murray to my left, David Malouf to my right, and what do you think we were talking about? Digging a hole for Sophia Loren. This was sometimes necessary, apparently, to make it look right when she was kissing shorter co-stars.

It accelerated into a blur. I gave a reading with Peter, Peter, Les, Paul and Chris and just smiled blithely at how unlikely the whole experience was. Lecture from Alfredo Conde, then everyone adjourning back to the Grand for lunch and more poetry. More food, more gossip. Sometime into the afternoon a whisper in my ear to be ready in 10 minutes. Dashed back to my room and flung everything back into the bags I should've packed earlier, then to the airport. Making an effort to diligently read The Odyssey but uni work was lost to me. For a weekend I'd been the fairy tale princess, so I sank back and pondered how things could go back to normal when I took my seat again in Art / Pornography / Blasphemy / Propaganda the following afternoon.

A month later, another festival. The Australian Poetry Festival in Sydney, 6-8 September.

I wasn't convinced that five poets piled in a Tarago was the best recipe, especially when the projected pick up time was 5:45am. 5:45, and no Tarago arrived. So I settled down to the tennis. Gonzalez had just won the first set of his quarter final against Schalken in the US Open, and the second set was on serve, 3 all – when Gonzalez lost it. He crumbled and lost five games in a row, quickly losing the second set and finding himself down a break in the third. Then he started to get his concentration back and was looking good when I heard a knock at the door and there was Dan Disney. What! Leaving in the middle of a match! No closure! 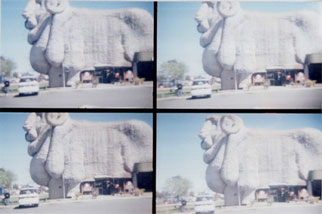 The trip up, Garth (Madsen) informed us, was dedicated to bonding. We could then spend the trip back de-bonding. We quickly entered into making Top 5 lists of Australian poets. We ate pancakes in Albury. We pondered Holbrook's submarine. We swapped poetry manuscripts. We practically braided each others' hair. After twelve hours we were there. I dumped my bag on the big bed and ran downstairs and quickly arrived at Balmain Town Hall. Feeling tired and a bit raw from the drive I immediately headed into the company of people I knew. They were all gentle with me. Nine poets read at the opening starting about 7:15pm with Geoff Page holding up the ACT end, so it was late before I finally made it to bed.

The superstar poets from Brisbane, Brett Dionysius, Melissa Ashley and Luke Beesley were reading at 10am, so sleeping in was immediately ruled out. Dragged myself up again in the morning to hear them. Brett had told me a while back that he'd been writing about America and Les Murray recently. It was great to hear some of this work. After the reading, the festival became a combination of pleasures: the pleasure of sitting on one of the comfy couches in the Town Hall (most of the time), and the pleasure of (occasionally) wagging a session, taking a walk down Darling street, or perching in the shade under the tree just outside.

Took a walk to a pastry shop down the road and discovered the lemon tarts were absolute winners, came back to claim a couch near the front for a panel on line and space in Australian poetry, given by Peter Minter, Kate Fagan and Martin Harrison (for me, this was the highlight of the weekend). Later in the afternoon, another panel, 'Getting Emotional' – science and emotion in poetry.

This was followed by Garth's favourite session of the festival: three male poets dealing out their tenuous relationships to masculinity. Mike Ladd thought he'd plunge right in with 'Vasectomy'. The friend I was sitting next to later said he'd squirmed a bit. Peter G followed, and just when you thought no-one could top it along came Ian McBryde.

Saturday night brought the performance and multimedia side of the festival to the fore, starting with the finalists of the Leichhardt video prize. While it didn't win first or second place (these were snaffled by the efforts of Francis Boyle, and Alicia Sometimes + Emilie Zoe Baker respectively), the people's choice winner What I did on my nervous breakdown was an instant hit. It had everything. Humour. Pathos. A crazy man dancing. This was followed by the launch of the latest Papertiger & Jayne Fenton Keane's 'Ophelia's Codpiece', bringing the audience another of her always energetic, always memorable performances, before the Leichhardt Performance Prize finals. Carla said this bit was her favourite, to see poetry being presented in really fresh, interesting ways.

The next day I heard Jordie Albiston read in the pm, gorgeous as always, and Peter Goldsworthy entertained as usual with his Judith Wright poetry lecture. He talked about the primacy of text in hiphop at one point, and then pondered if it was perhaps limited by the number of things rhyming with 'motherfucker'. My friend Elena, who knows about these things, looked at me and said, 'Youd be surprised'. No-one could blow out all the candles on Vera Newsome's birthday cake, and so, she supposed, 'I guess that means I'll live forever'. Next morning we set off home, after someone finally told me Hewitt had lost in the semis, and it was somewhere around Euroa on the trip home I heard Sampras had won the US Open.

It's especially good, after the crush of the Melbourne Writers Festival in between, to see these smaller friendly festivals flourishing. It's a pity I missed all that tennis in being there, but I've included the scores below for all the games I missed.