Paul Mitchell on Sleepers at Next Wave 2004 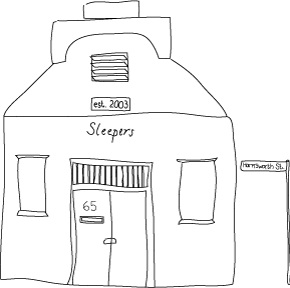 This event was presented at the Next Wave Festival in a bar venue – after a big crowd had finished fawning all over American cartoonist, writer and film director Harvey Pekar (American Splendor). It's probably a top movie (I haven't seen it yet), but, as I was saying to Zoe beforehand, if you put the word American in front of bloody anything people will go see it – American Beauty, American Graffiti, American Pie, American Idol – let's make a movie, call it American American. Double the box office returns …

Anyway, they finally dragged Harvey off stage and the Sleepers event started. Or at least it tried to start. Lou and Zoe, maybe used to the captive audience at one of their Sleepers Salons in Fitzroy every month, spent a fair whack of time trying to get the people screeching at each other at the bar to shut up. They didn't. As a poet sitting next to me said, Shit, I used to read poetry between bands at the Punters Club . . . this is nothing . . .

The bottom line was that the PA was loud enough so that anyone who wanted to hear could. And there was some good stuff to hear.

Stella Glorie (she should have her own talk show with a name like that) proved that she's not just a pretty voice on the phone or a pretty face in the office at the Victorian Writers Centre by hosting the event with long-socked aplomb. She was witty and well informed, having studied poetry to a high level, though not as high as one of the panellists, the PhD in poetry wielding Shelley O'Reilly. Steve Smart represented the young, street and hip firebrand-type poet and Terry Jaensch, former convenor of the Boroondara poetry events and former poetry editor of Cordite, represented whatever he wanted to represent, as is Terry's forthright way.

The format was a discussion of what makes good and bad poetry, with Stella leading the panel in the talkfest. These things ordinarily bore the living crap out of me, but I found this strangely interesting and informative. Maybe it was the fact that I had been in the office all day or the fact that I hadn't written much of late. No, I think it was more the quality of the commentary.

Shelley impressed the need for poetry to be concise to be good. Also wanky and big words are bad, in Shelly's book. (She's got a book – but it's short fiction.) Steve suggested that poetry needed to be direct, honest and trying to do something a bit special with the subject wasn't a bad idea, either. He thought bad poetry is stuff that you think is bad. The old beauty is in the eye of the beholder idea. He didn't mind the idea of reading the classics, but thought you could get as much out of reading your Melbourne contemporaries as some of the big names of the past. A debatable point if there ever was one. And it was debated – as were a lot of the comments made, which was great.

This wasn't a love-in – people on the panel weren't afraid to disagree with each other, and people in the crowd weren't afraid to disagree with the panel or each other. People who write poetry that's considered impenetrable were named, outed – I'm not going to reveal who they were, it's your fault for not being there! But no prisoners were taken, big names were slagged off and they were ones that could easily turn up at the next reading . . .

But, yes, as is traditional, Les was bagged out. And John Laws. Who, on the cover of his poetry book (roundly agreed to be an example of non-poetry) Steve Smart rightly pointed out looks like Steve McQueen.

Terry Jaensch, for this punter's mind, made the strongest comments. Terry spoke about the need to be as fully educated in poetry as you can be if you want to write good stuff – not necessarily studying it, though he didn't think that was a bad idea. But, rather, he thought reading voraciously was important, seeing what has been done in the past so you know your place now as a writer – and reader. He spoke about good poetry being work that is self-sufficient, self-contained; a piece of art that is not dependent on anything outside itself for reference and that makes its own kind of reality.

I'm paraphrasing and I'm sure Terry will tell me if I've got that wrong. He's an opinionated commentator on poetry, but his opinions seemed pretty well formed. He spoke about the need for readings to be conducted in a professional manner and then for poets to read their work professionally – if they have to read it at all (Terry is an advocate of memorising your work). Steve Smart suggested that poets need to have at least read their work to themselves at home to see what it sounds like before visiting it upon an unsuspecting audience.

After they'd finished the panel discussion, Zoe and Lou came back and bagged out the people down the back for pissing on and yapping loud all through the discussion. Told them they should have shut up cos they might have learnt something, or words to that effect. Still, you can lead the barflies to the poetry, but you can't necessarily make them listen. Those with ears to hear would have got a lot out of the event, anyway.

This entry was posted in FEATURES and tagged festivals, paul mitchell. Bookmark the permalink.