A Field Report from This is Not Art 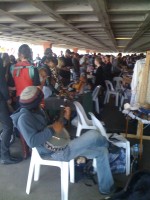 It didn’t really sink in that I was going to This is Not Art (TiNA) until about halfway through the flight from Perth to Sydney. I largely did not know what to expect, having done relatively little research beforehand and being chronically distracted by PhD studies/life as I know it. All I knew was that I needed enough money to get food and train tickets for four days, and possibly an umbrella (which I forgot). Even having returned from Newcastle, I am convinced that a return trip next year is needed in order to even being to understand the kinds of energies involved in arranging such a massive operation. Not only were the organisers incredibly friendly and motivated, but so was everyone else who made it there as well. Some kind of apparently boundless enthusiasm seemed to fill Newcastle. No matter where I wandered (lost or otherwise), I encountered like-minded individuals (often lost as well) and a genuinely friendly, passionate atmosphere.

My decision to attend TiNA was, like most things in my life, carefully and meticulously planned.  After submitting an application on a whim, with complete disregard for my inherent terror of public speaking, I was accepted by Critical Animals to present a paper on my PhD topic, namely Sappho’s subtly feminist poetic legacy.  The acceptance email arrived some time after I’d forgotten that I’d even applied, and inspired a combination of excitement and abject horror at what I’d signed myself up for. The terror associated with presenting said paper did, thankfully, pale in comparison with an accommodation debacle that almost left me sleeping on the streets.  (Courtesy of a computer error, I didn’t know until just before my flight whether or not I would be sleeping in a place with a roof, or making a makeshift tent at Tent City out of the printed out copy of my Sappho speech.  Thankfully the latter only had to be briefly considered when I initially couldn’t open the room door, but this wasn’t exactly a wonderful start, and I only had myself (and the hotel) to blame.)

Despite this hotel-related incompetence, the trip to Newcastle was actually very fun.  Even in my cranky and sleep-deprived state, the scenery on the train trip from Sydney up to Newcastle was very pretty, and the carriage blissfully free of noisy children.  Thankfully, I was too tired to churn out sleep-deprived and astoundingly awful poetry in response to said trip, and was resigned to enjoying the journey in peace.  After getting very lost on the way to a back-up hotel, I arrived on Thursday evening too late to attend any of the events held that night, so I resolved to wake up early and make less of a muddle of the next day.

Pages: 1 2 3 4 5 6
This entry was posted in GUNCOTTON and tagged festivals, NYWF. Bookmark the permalink.
Siobhan Hodge has a PhD in English literature. Her thesis focused on Sappho’s legacy in English translations. Born in the UK, she divides her time between Australia and Hong Kong. Her chapbook of reflections on Sappho, Picking Up the Pieces, was published in 2012 as part of the Wide Range Chapbooks series. She is currently the Reviews Editor for Writ Review and an Associate Editor for Rochford Street Review. She has had critical and creative works published in a range of places, including Westerly, Axon, Contrapasso, Peril, Plumwood Mountain.