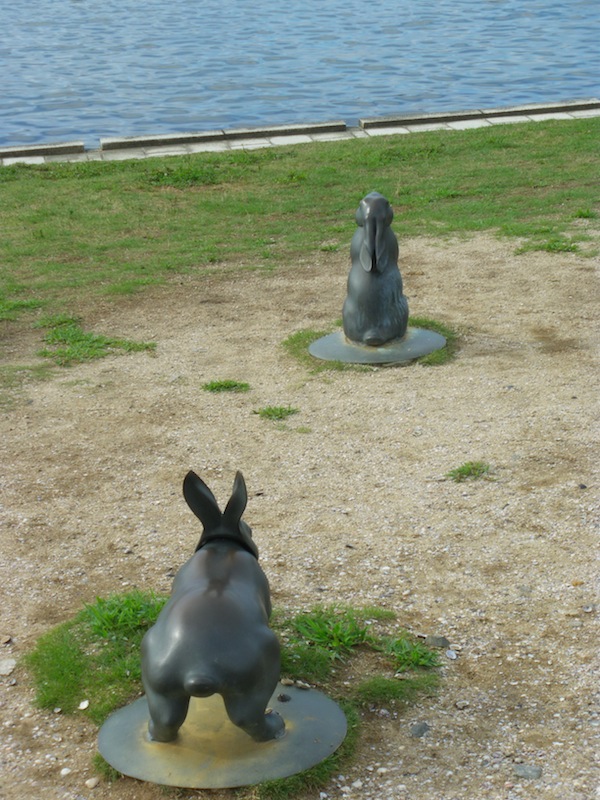 Female haiku writers can hardly be categorized either in the language-centered group or in the existential image group, as described in my previous post. Even if they are different from each other and have elements common to male contemporaries, thinking about the genealogy of women haijin seems more informative than mingling them together with male writers.

Daily life is filled with surprises. With her trademark colloquial style IKEDA Sumiko (池田澄子; b.1936) shows this point most vividly:

I kindly cut
a green pepper &
let its inside bright

Getting into a sweater
I might be unable
to get out

Certainly the inside of an uncut green pepper is dark, but who have ever written about that too obvious fact in an impressive way like this? The second is like an answer to a riddle of the world: Why is something that something?– It might only depend on a chance. The slight fear in the third must be the one that we all felt in our childhood but have forgotten long since. The tongue-in-cheek tone in her diction heightens the sense of wonder in triviality, the often most hidden element in our life.

KURODA Momoko (黒田杏子; b.1938)’s style is more orthodox, constructing a haiku by combining images, but there is a sense of discovery here too:

All the zodiac animals
fly away into the dark –
a phantasmagoria

A Noh mask
breaks into pieces –
a moon-lit port

The technique of “mitate” is used here as in Settsu Yukihiko’s works but in a much more modest way. Figures in light from a phantasmagoria certainly seem to run away into the dark, and that is calculated to also read as a metaphor of passing time (In other words the phantasmagoria with zodiac animals is a “mitate” of passing time). In the last haiku there is a leap between the images: a noh mask (能面) and a moon-lit port (月の港). It allows the reader to provide a link between the two.

In her haiku ÔKI Amari (大木あまり; b.1941) presents a female viewpoint that feels persuasively secure and at the same time spontaneous:

He is my husband
& also bad old company –
burning firewood

Under a chilly moon
we sleep like a brother
& a sister

They feel like listening to a woman talk about her casual feelings and thoughts. The opinion in the first is almost irrational, but with the image of pomegranate flowers (which connotes hidden sexuality) it leads to an image of a woman who sincerely holds this opinion. The distance or faimiliarity with the male is more freely and subtly taken down than in works by earlier female haiku writers: like friends, and like brother and sister. Sexuality and gender roles are far less fixed now than before.

ÔNISHI Yasuyo (大西泰世; b.1949), mainly active as a senryû writer, uses the freedom of gender images in quite a different manner:

In February
the genitals die
elegantly

With how much ecstasy –
the large tree
never stops swaying

The showoff of sexuality here both tries to disrupt and depends on traditional images of nature. February is the time when plants start its activity for the spring (The name fo the month Kisaragi (如月) means “renewal of life (生更ぎ),” and the haiku simply puts the dying genitals in it: tension between life and death. In the second example a rather simplistic projection of a subjective feeling (desire for physical pleasure) on an object (a large tree) jars the traditional views on nature, and effectively expresses the unruly strength of the speaker’s desire.