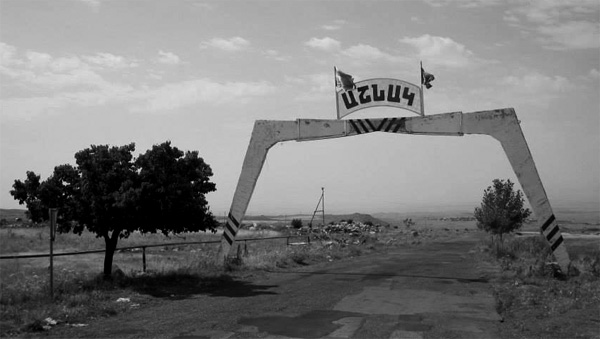 First impression: Yerevan undulates out the semi-desert, ringed with what look suspiciously like nuclear reactors. Flight SU1860 jolts down at (the recently privatised) Zvartnots airport, and we pass a dis-assemblage of passenger jets in various states of stripped-down decay. In the snow-capped distance, and just over the border with Turkey, Mount Ararat landmarks the otherwise small-hilled afternoon, a daily taunt here to national pride. In 1921, Stalin, Atatürk, and others sat down to reset national boundaries (during the Treaty of Kars): from uptown and dropping into Yerevan’s city centre, it feels like a bay should establish the city’s fringe. Instead, there’s that distant tidal wave of the now-Turkish mountain, where mythology tells us Noah parked his improbable floating zoo.

This stone city is built on the ruins of ancient Erebouni (782BCE), and has been criss-crossed by successive marauders (including Assyrians, Persians, Arabs, Byzantines, Mongols, Turks). It is one of the world’s oldest, continually inhabited cities. The currency is adorned with poets: Hovannes Toumanian (1869-1923) is commonly regarded as the father of modern Armenian letters, while the brilliant Yeghishe Charents (1897-1937) died a counter-revolutionary during the Soviet purges. When I hand over a few notes of Armenian dram in exchange for a visa, the border guard hands back a ‘shnorhakalut’yun’ (thank you), and then ‘welcome you, mister’.

The history of Armenians is measured in millennia. We are in that part of the world that is customarily called the cradle of civilization. We are moving among the oldest traces of man’s existence … The fate of Armenians: centuries of persecutions, centuries of exile, diaspora, homeless wandering, pogroms. (Kapuściński 1995: 46; 231)

This wind-bitten place was a dormant village until 1918, when the Soviets turned Yerevan into Armenia’s capital (the country’s thirteenth). Today it is full of young families and bent police and huge, brutal, upright statues and unkempt parks and public squares bustling with flea markets and sun and overcrowded, dusty mashutkas (mini-buses) which jostle across town at 27¢ per ride. I am here as a guest of Mkrtich Tonoyan, director of the Armenian-based arts residency program ACOSS. This monolithic 37 year old is a former teen paramilitary, and carries books like Education for Socially Engaged Art with him everywhere. Tonoyan lives by his ethics like few other artists I know: any money generated by ACOSS is channelled directly into projects for children and socially-disadvantaged groups.

During my month-long stay as an ACOSS writer-in-residence, he delivers a new turbo charger to a rehabilitation centre’s inert bus and, when he visits an association for blind veterans in Stepanakert (the de facto capital of Nagorno-Karabakh Republic, which remains disputed territory), he promises to fund twenty new handheld laser guidance devices. Tonoyan lives in a tiny apartment on the outskirts of Yerevan, together with his mother and grandmother, wife and three kids. We can’t walk 20 metres in this part of town without somebody clutching him in a bear hug. And anything growing on trees in his garden is prima materia: the aim is for home-made vodka which is 96% proof, a liquid corrosive for the psyche. The parties in his studio attract artists from across the Caucasus. 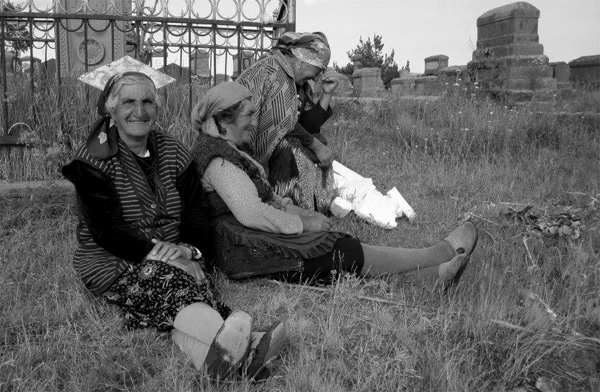 Firmly hand-in-hand into the future with Russia, Armenia remains at loggerheads with pro-American, neighboring Georgia. To talk of some of the other neighbours only raises eyebrows and blood pressure: the war with Azerbaijan is ongoing (at best, a ceasefire), and everyone has an evenings’-worth of outcry over the Turkish-led genocide, which started in 1915 and ended up in one and a half million Armenian deaths later. And though the Soviets left in 1991, they left a culture of censorship behind – as Armenia’s foremost avant-garde poet, Violet Grigoryan, based in Yerevan, knows only too well. Cultural commentator and raconteur par excellence, Grigoryan once hosted her own TV show … which the state closed overnight for its ‘inappropriate’ political content. In her introduction to Deviation: Anthology of Contemporary Armenian Literature (2008), she contests that:

The concept of ‘drawer’ literature first emerged during perestroika, referring to works that authors hid in drawers … A long time has passed since the collapse of the Soviet Union and the disappearance of state-mandated censorship. Nevertheless, the censorship survived in the people’s spirit and in those who continued to govern the literary world. (Grigoryan 2008: 7)

So what to do when confronted (as she perceives it) with a cultural economy regulated by reactionary bean-counters? Grigoryan persists with making space to escape institutionalised censorship; she purposefully antagonises any valorised group (‘Academia, the Literature Departments, the publishers and the Stalin-styled creative unions’: Grigoryan 2008: 7), through fostering writing which employs non-normative styles. She is part of a raucous group – the Inknagir Literary Club, based in the city – that demands freedom, plurality, and empowerment. Members are frequently blacklisted, despised for themes which include homosexuality (still largely unmentionable in Armenia), sexual violence, suicide, necrophilia. One academic states that Grigoryan’s cohort are:

Demolishing all the moral, ideological, and spiritual standards in their wake. Preaching their message of verbal freedom, they dragged into literature the stratum of language that has no place in the dictionaries and … literally exudes the stench of decay. (Zhenia Kalantaryan, cited in Grigoryan 2008: 9).

For the Inknagirs, reactions like this means their impact on contemporary Armenia literature is already a fait accompli.

And so, in this small and landlocked country where 80% of the borders are closed and the threat of missiles dropping over Yerevan looms (to almost every Armenian’s dismay, Russia recently sold US$4 billion of arms to oil-rich Azerbaijan), creative producers are struggling to make sense of their role after the death of the Marxist drive toward utopia: are they social workers or social misfits? Is an artist an activist rebuilding communities through art, or a destinateur of programmatic bad taste, smashing everything so as to start again? Either impulse speaks to ideas of engagement and idealism. Tonoyan and Grigoryan embody competing impulses in a dynamic scene populated by artists living each to authentic visions of aesthetic function: in a place where there is almost no opportunity for creative producers to receive support for their work, the Armenian artists I met would welcome visits from funded, comparatively wealthy First World poets. Next time you receive funding or win a prize, consider visiting.

This entry was posted in ESSAYS and tagged ACOSS, Dan Disney, Mkrtich Tonoyan, Violet Grigoryan. Bookmark the permalink.
Dan Disney is an Associate Professor with Sogang University's English Literature Program, in Seoul. He is currently completing a collection of sijo/stlings.