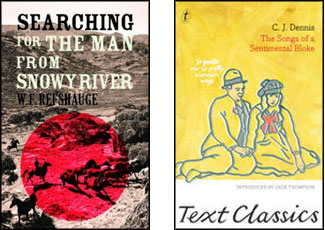 The Songs of a Sentimental Bloke
by C.J. Dennis
Text Classics, 2012

Searching for The Man from Snowy River
by W.F. Refshauge
Arcadia (ASP), 2012

The son of Irish immigrants, C.J. Dennis was born in South Australia in 1876. He died in Victoria in 1938, having become Australia’s most popular poet during his lifetime. Dennis’ first collection, Backblock Ballads and Other Verses (1913), was not a commercial success, but Dennis’ second collection, The Songs of a Sentimental Bloke, first published by Angus & Robertson in 1915, arguably became the most popular book of poetry ever published in Australia. Jack Thompson notes in his introduction to the Text Classics edition that the first edition of The Songs of a Sentimental Bloke sold out in a month, as did two subsequent editions; fifty-one thousand copies were sold in just over three months, sales figures that contemporary poets and publishers can only fantasise about. According to Ian McLaren, fifty-seven editions of the book were published in Australia, England, Canada and the United States by 1976, with total sales approaching 300,000 copies.

In 1919, an acclaimed silent film based on the poems was directed and produced by Ray Longford. A play was staged in 1922, a film version with sound appeared in 1932, ballets were performed in 1952 and 1985, musicals were produced in 1961 and 1986, and a television adaptation premiered in 1976. Numerous radio performances and audio recordings have also been produced, including Jack Thompson’s (2009). The longevity and adaptability of Dennis’ tale of the larrikin Bill and his sweetheart Doreen is remarkable, and there are few other Australian narratives that exist in so many iterations and possess such longevity.

The Songs of a Sentimental Bloke made Dennis the most successful poet in Australia; however, his critical reputation has not reached the levels of his contemporaries A.B. Paterson and Henry Lawson. Despite the enormous popularity of the collection, only fifty works about the text have been published over the past ninety-eight years, and less than twenty of those works are academic essays. The lack of extensive critical engagement with Dennis’ work may be a result of its ongoing popularity and deliberate appeal to a mass audience, qualities that lead some academics to view such texts as not literary enough and therefore not worthy of critical engagement.

Although readily available online free of charge, Text clearly believes there are readers willing to pay for a print copy, having published a new edition in 2012 as part of their Text Classics series. Interestingly, The Songs of a Sentimental Bloke is only the second book of poetry in the series. The new edition contains Henry Lawson’s original foreword as well as the original glossary – which contemporary readers will find extremely useful, since much of the slang used by Dennis is now archaic. The collection, sometimes called a verse novel, contains fourteen poems arranged to form a narrative of the relationship between Bill and Doreen, from their first meeting through to their marriage and life as parents. Twelve of the fourteen poems were first published in The Bulletin.

Although The Songs of a Sentimental Bloke is well known for Dennis’ use of slang and eye dialect, his celebration of early-twentieth-century working class culture, humour, and linguistic playfulness, his poetry is simultaneously rather formal. Dennis employs a strict rhyme scheme in every poem, ranging from the simple AABB four-line stanzas of ‘The Kid’ to the more complicated AABCCBDD eight-line stanzas of ‘Beef Tea.’ In almost every poem in the collection, Dennis uses a standard stanza length throughout, the one exception being ‘Pilot Cove,’ which begins with an eight-line stanza followed by ten seven-line stanzas. Dennis’ narrative poems are mostly of moderate length, the shortest consisting of sixty-six lines and the longest containing one hundred and thirty-eight. Of course, Dennis was writing long before free verse became widely accepted and thus his use of strict rhyme schemes and stanza structures reflects the prevailing notion of poetry at the time of composition.

It is to Dennis’ credit that he is able to create such inventive verse within formal constraints. His decision to write in the first person, using the voice of the larrikin Bill from the Little Lonsdale Street push, limits his diction in that he can only use language that such a character would possess. Yet Dennis still manages to create many beautiful and striking lines, such as his combination of eye dialect, slang and paraphrase of Shakespeare in ‘The Play’:

The collection’s narrative and the narratives within each poem are easy to follow, and with the aid of the glossary, the archaic vernacular does not pose contemporary readers with many problems. Some of the subject matter may jar the sensibilities of contemporary readers. Given that the poems are roughly a century old, the gender roles are traditional (some might say backward), as are the values espoused. The glossary states that the word ‘tart’ refers to ‘A young woman (contraction of sweetheart)’; however, contemporary readers are so accustomed to reading or hearing the word as a pejorative that Bill’s repeated references to Doreen as his ‘tart’ may be grating. Likewise, Bill frequently refers to women as a ‘bit o’ skirt,’ ‘sweet skirt,’ and ‘bit er fluff.’ When Bill succumbs to jealousy and believes Doreen has mistreated him, he resorts to sexism, declaring, ‘The ‘ole world over tarts is all the same; / All soft an’ smilin’ wiv no ‘eart inside’ (‘The Stror ‘at Coot’ 9-10). The low point of the collection, linguistically speaking, occurs in ‘The Stoush O’ Day,’ in which Dennis personifies night and twice describes it as ‘nigger’ (8, 55).

The overall arc of the narrative serves to promote patriarchy and traditional gender roles. Bill is transformed through his relationship with Doreen from a violent, drunken larrikin into a caring, doting husband and father, living a quiet, industrious life on a farm away from the vices of urban temptation. The poems in the middle of the collection, such as ‘Doreen,’ ‘The Play,’ ‘The Siren’ and ‘Pilot Cove,’ are the most interesting and entertaining, charting the ups and downs of the relationship, Bill’s amusing take on religion, and his hilarious paraphrasing of Romeo and Juliet, in which he dubs Mercutio ‘Mick Curio.’ However, the two final poems, ‘The Kid’ and ‘The Mooch O’ Life’ are rife with platitudes and stereotypes promoting heterosexual marriage and fatherhood as the epitome of human existence. Nevertheless, contemporary readers will find much to enjoy in The Songs of a Sentimental Bloke, which deserves its status as a classic not merely due to its stunning commercial success and impact on Australian culture, but also because of its detailed, joyful and inventive portrait of a bygone era.

Pages: 1 2
This entry was posted in BOOK REVIEWS and tagged CJ Dennis, Nathanael O'Reilly, The Man from Snowy River, The Songs of a Sentimental Bloke, WF Refshauge. Bookmark the permalink.

Nathanael O’Reilly was born and raised in Australia. He has travelled on five continents and spent extended periods in England, Ireland, Germany, Ukraine and the United States, where he currently resides. His poems have appeared in journals and anthologies in nine countries, including Antipodes, Australian Love Poems, Cordite, FourW, Glasgow Review of Books, LiNQ, Mascara, Postcolonial Text, Snorkel, Tincture, Transnational Literature and Verity La. O’Reilly is the recipient of an Emerging Writers Grant from the Literature Board of the Australia Council for the Arts. He is the author of Preparations for Departure (UWAP Poetry, 2017), Distance (Picaro Press, 2014; Ginninderra Press, 2015) and the chapbooks Cult (Ginninderra Press, 2016), Suburban Exile (Picaro Press, 2011) and Symptoms of Homesickness (Picaro Press, 2010). He was the writer-in-residence at Booranga Writers’ Centre in May 2017.

View all posts by Nathanael O'Reilly on Cordite →