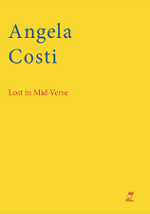 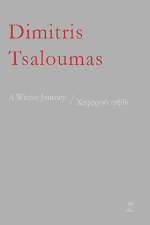 Angela Costi’s poetry and fiction have appeared in many venues, including Cordite Poetry Review, The Age, Going Down Swinging, Overland, and Southerly. She has also published non-fiction prose and written seven plays. Costi’s new chapbook, Lost in Mid-Verse, is her fourth collection of poetry, following Dinted Halos (2003), Prayers for the Wicked (2005) and Honey and Salt (2007). Part of Owl Publishing’s chapbook series, which aims ‘to showcase the diversity of poetry by emerging and established Greek-Australian poets,’ Lost in Mid-Verse contains an introduction by writer and visual artist Peter Lyssiotis and seven poems spanning just fourteen pages.

In his introduction, Lyssiotis situates Costi’s poetry in the context of migration, dispersal, displacement and the search for a homeland. Lyssiotis claims that nostalgia is ‘the predominant feeling which courses through’ Costi’s collection; he acknowledges that ‘nostalgia may have a bad name,’ but certainly does not use the term in a pejorative sense when applying it to Costi’s works. For Costi, nostalgia is a return home (the word itself has roots in the ancient Greek word for this very concept): longing for the past, an embrace of memory, a connection to the people, places and culture that make us who we are. Some readers and writers may dismiss nostalgia as mere sentimentality, unfashionable, conservative and not sufficiently progressive for contemporary poetry. However, Costi’s work admirably demonstrates the necessity of nostalgia as a crucial tool in the search for belonging, community and identity – all aspects of what we might call ‘home.’

The first piece in the collection, ‘Sugared Almonds’ is a thirteen-line poem written in the first person plural voice. The speaker speaks for an unnamed ‘we,’ presumably young female members of the Greek community, whose ‘Great grandmothers happily wept / hope into tear pods to tuck / under our pillows and seed / dreams of husbands in bloom’. Here Costi immediately establishes the importance of ancestry, family relationships, marriage, hope, dreams and community. In the next poem, ‘The Question’, she employs a more complex poetics, delivering a forty-six-line poem comprised of six stanzas of varying lengths, along with a variety of line lengths and some experimentation with spacing. Like ‘Sugared Almonds’, ‘The Question’ addresses matrilineal relationships, marriage, culture and connections between the past and present. However, ‘The Question’ is a much more personal poem, focusing on the speaker’s emotions and place in the world. In its second stanza, Costi’s speaker declares with economy, wit and irony, ‘I’m groomed to marry the past / and in my early years I say: I do.’ As the poem progresses, the effects of the past accumulate: ‘birth and death adorns our mantelpiece’; ‘laments are collected’; ‘the bevelled mirror is polished with regrets’; ‘children and children’s children … bring in dirt, dust, sand … too much to sweep away.’ In the fourth stanza, the speaker recalls her grandmother’s question, ‘What must you bury to continue?’ The grandmother’s direct and profound question can be read as a central concern of Costi’s collection and might be paraphrased as: ‘How much of the past must we leave behind?’ or ‘How much of the past can we hold onto without being held back?’ Such questions seem crucial for any individual attempting to attain belonging in a new homeland (such as an immigrant or refugee), in addition to possessing more universal applications to the human condition.

At sixty-two lines, ‘Mothers’ is the second-longest poem in the chapbook. Another poem written in the first person voice, ‘Mothers’ maintains the focus on the familial role of women. In addition, the poem deals with the creative process and its sources of inspiration. In the third stanza, poetic inspiration is insistent, demanding, even violent: ‘Lyrics come stomping up and down the hallway / knocking at the door, waiting for no reply / they barge in to slap away sleep.’ ‘Mothers’ is the first poem in the collection in which Costi incorporates Greek words and phrases, a technique she also employs in ‘Stede’s Monologue’ and ‘Another Letter’. In ‘Mothers’, Costi incorporates phrases (and English translations of phrases and lines) from several Greek children’s songs. The material from the Greek is smoothly incorporated, and serves to enhance and enrich the poems. Notes provided at the end of the collection helpfully illuminate Greek words, phrases and cultural references.

Costi’s style is direct, concise and penetrating. She writes with a beautiful economy and possesses a talent for subtle suggestion and quiet irony. Although she usually organises her poems using stanzas and employs traditional poetic elements such as metaphor, simile, imagery and allusion, she largely eschews rhyme and formality, creating a personal poetics that is neither traditional nor experimental. Costi’s line breaks are mostly effective and unobtrusive, but in at least two poems (‘Sugared Almonds’ and ‘Stede’s Monologue’) she includes lines ending with ‘and’, missing the opportunity to produce a more powerful or surprising effect. Nevertheless, Costi’s poetics come across as natural, honest, unforced and entirely her own. In other words, Costi has succeeded in developing her own voice, which is a feat to be admired.

While Angela Costi can be accurately described as an established poet, Dimitris Tsaloumas has earned the title of elder statesman, not merely due to his longevity (he is now in his nineties), but because of his significant poetic achievements. Tsaloumas was born on the island of Leros, Greece, in 1921, and migrated to Australia in 1952. After graduating with an Arts degree from the University of Melbourne, Tsaloumas spent more than two decades teaching in secondary schools. During those years he married, had four children, and began publishing poetry in Greek. Tsaloumas is the author of more than twenty books of poetry, written in Greek and English, including Falcon Drinking (1988), Portrait of a Dog (1991), The Barge (1993) and The Harbour (1998). His books have been published in Australia, France, Greece, and the United Kingdom, and he has won major prizes, including the National Book Council Award and the Patrick White Award.

Pages: 1 2
This entry was posted in BOOK REVIEWS and tagged Angela Costi, Dimitris Tsaloumas, Nathanael O'Reilly. Bookmark the permalink.
Nathanael O’Reilly was born and raised in Australia. He has travelled on five continents and spent extended periods in England, Ireland, Germany, Ukraine and the United States, where he currently resides. His poems have appeared in journals and anthologies in nine countries, including Antipodes, Australian Love Poems, Cordite, FourW, Glasgow Review of Books, LiNQ, Mascara, Postcolonial Text, Snorkel, Tincture, Transnational Literature and Verity La. O’Reilly is the recipient of an Emerging Writers Grant from the Literature Board of the Australia Council for the Arts. He is the author of Preparations for Departure (UWAP Poetry, 2017), Distance (Picaro Press, 2014; Ginninderra Press, 2015) and the chapbooks Cult (Ginninderra Press, 2016), Suburban Exile (Picaro Press, 2011) and Symptoms of Homesickness (Picaro Press, 2010). He was the writer-in-residence at Booranga Writers’ Centre in May 2017.