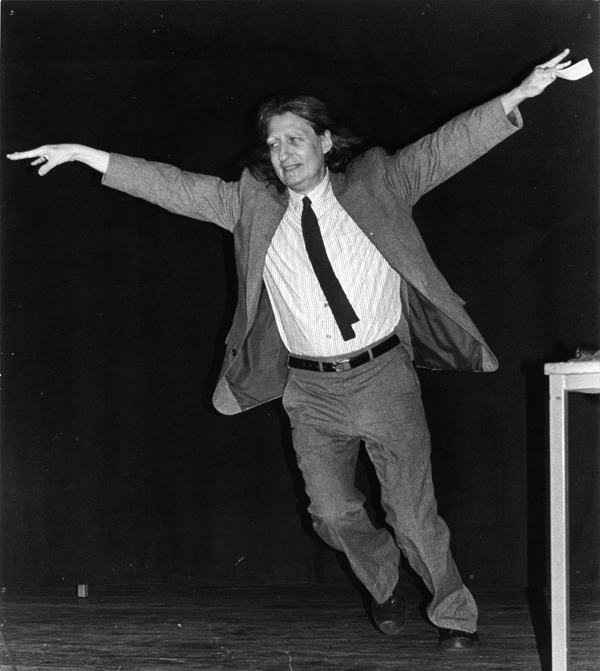 I am speaking of the organizing mind, the quality of mind we encounter in all of Mac Low’s work,
whatever its ratio of intention to procedurally eventuated “nonintentionality” may be.

A system became necessary; how else could I see more concentratedly,
find some interest, continue at all?

It was the question of the quality of the ‘organising mind’ (in the above epigraph of Retallack) that began this little inquiry, an inquiry that, as Retallack puts it, is certainly based around ‘procedurally eventuated nonintentionality,’ but will go beyond that. I wanted to know about organisation as a quality of mind. Having myself been immersed in procedural practice, I now want to ask a different kind of question: What is the organising mind in poetry and poetics? Extending Joseph Conte’s critical notion of ‘procedural form,’ what is a procedural sensibility? Why do we do it (self-directed, and you too, if you do do it)? More than constraint, though inclusive of it, what is a poetic practice of organising principles? What about the psychodynamics of it (god forbid)? To practise austerity (with an s)? And with procedure, austere praxis … ?

These questions have long persisted in my poetic thinking, both in the work of the poet Jackson Mac Low and, by way of an exploratory comparison, two artists who began operating in the 1960s, Hanne Darboven and On Kawara, both of whom used writing as artistic practice. (Warning: genres will here be mixed. Interart illegality has brought us to the point that we’re now on the run from the laws of genre).

Before things get more specific, my first wager is this: Mac Low (US, 1922 – 2004) will have some bearing on the development of poetry and poetic over the next 25 years. There is an uncompromising sense of commitment to experiment in his work that is enticing and enduring. There’s a plasticity: As analog turned to digital, as autography morphed into the word document, so his practice shifted (even where the discipline remained). A futurity: tirelessly, perhaps even ‘austerely,’ he remained at the frontline of experimental poetics. A contemporaneity: poetics in the present is marked by the work of Mac Low (we like this work). Even here at Cordite Poetry Review (where most Australian readers are likely to have at least heard the name Mac Low), much of this could probably be less introductory. (Those with a predilection for conventional verse might get shocked at some of Mac Low’s stuff. That’s OK too).

10:36 AM, 12 Jan 2016. The work persists. Two of the most recent republications of his work have been summative of sequential pieces that previously lay about uncollected, namely 154 Forties (Denver: Counterpath, 2012) and The Complete Light Poems (Victoria, TX: Chax, 2015). Both of these publications acknowledge, rightly so, Mac Low’s occasional renunciation of sternness and austerity, his readiness to ease-off on the strain of performing austere exercises that relinquish the intensities of writing expression.

Relinquish, sure: even to construct something else, to go besides, to lay oneself bare to ‘spontaneity.’ But if the Light Poems and the Forties movingly and delightfully re-interpolate a rusty ego (sometimes in bursts of erotic delight) then what can we say of this other side, the so-called ‘nonegoic’ aspects of poetics? What precisely is the role of the ‘most austere’ pieces? How much of a morsel of ego can we still detect in the most non-egoic of Mac Low ‘s pieces? What is their purpose (if any), and why were they written in the first place? We know something of why expression occurs, but what of this other kind of subjectivity, this holding-off? What’s the link between subjectivity and expression? (Widening our senses of subjectivity here will be paramount). Is it really a ‘withdrawal’ (other semes here included) from expression, or indeed another kind of expression altogether? Is there such thing as an expressionless system? What are the psychotheoretical, ideological and ethico-political resonances of a poetics of austerity? Is ‘austere’ the right word? (Let me be open about my doubt).

The ‘Maximalist’ ambience of austerity

In an interview with Walter Smerling, the German artist Hanne Darboven was asked if her art was a ‘mixture of knowledge and discipline,’ to which she replied ‘Exactly! This is not Minimal, it is Maximal Art I am making.’1 It is not for nothing, then − and all for the maximal impact of the epistemology of the sociopoetic − that I have chosen the term ‘austerity’ over other possible descriptors for ‘discipline.’ We live in narrowing and harrowingly austere times; austerity against public works, State-sponsored austerity measures, austere minimalisms in global architectures built off minimalist conceptual practices, (so lets try some maximal experiments and see where they get us).

I needn’t be so cautious about it.
I’m arguing that we,
meaning us readers, critics too, can let our ears
and eyes (or ‘eyears,’ as Garrett Stewart puts it)
be a little
more receptive to austere work. I want
to revive
the maximalist potential of austerity, austerity as an accumulative,
materialist practice of expansion. If
I had chosen ‘severity,’
this would have introduced
psychotheoretical dynamics (nay, explosive dynamites)
of punishment and servitude,
perhaps the repressive aspects of strict work; the psychodynamics
of repetition …
and perhaps severity would have sufficed,
but austerity contains it. Therefore ‘austerity’
as a practice,
as something that often eludes
our critical ears. Here I want to revive,
in some readings, the ambience of austerity.

A disco is an operating system (Tan Lin).

One definition of austere: ‘severe or strict in manner or attitude’ would allow us to imagine the ambience of a text or work of art that exhibits the manner or attitude of austerity: feelings of awe, amusement, hilarity, incredulity or wonder might accompany feelings of stupor, anxiety, even fear. A maximalism that might initially make little sense: Why would that poem be so long, that artwork so painstakingly ‘repetitive’ (at first glance) withholding immediate expression, or so subordinated to a process whose completion can only offer a ‘higher’ satisfaction?

Computers with people in front of them
are ambiguous reading scenes.
You are now reading, digitally,
but you can choose
to operate in this system as you wish,
and you don’t have to remember anything.
You are reading light, in light.
This is a kind
of austere situation.

Humour is a significant factor in austere writing.

The political-economic aspects of austerity are not easily answered. The way in which austere artistic practice might be thought of as an internalisation, and resistance of, capitalo-imperialism’s externally-propagated austerity, requires serious discussions of time. Yes, austere writing works through durational structures that place the ‘work’ of art outside a wage-earning day. We might (if we have time, that is) imagine austere writing working daily life into an artistic practice that trumps alienation. Poethics (Joan Retallack) of austerity?

This inquiry will begin with a poem that has occasionally held the attention of commentary on Mac Low. The poem is ‘Converging Stanzas,’ composed 5 July 1981, in New York. There are 60 stanzas of which here are three, taken from the beginning, middle and end of the poem:

Barrett Watten has read this poem as reinscribing ‘lexical substitution toward a predetermined horizon’ that is ‘carried out to a (fully acknowledged) terminal degree’ (The Constructivist Moment 41). This terminal horizon is reached by narrowing the limit capacity of words chosen from Charles Kay Ogden’s international auxiliary language, BASIC English, such that the poem can only ‘stop’ when the stanzas have been purged of all but one word: ‘experience.’ The procedure will ‘progressively reduce’ the operative poetic vocabulary it started out with until the last surviving word becomes a zero point on which the final stanza will rest. Watten holds his attention at ‘experience’ itself, which he reads not as repetition, but as ‘total resynonymy’ leading to ‘new meaning’ in the communal and ethical sense, through poetic form (43).

To be perfectly clear about this: procedure, as it has been throughout OuLiPo (against whose technicity Mac Low certainly can be compared/contrasted) is a confining of elements that end up maximally blowing out. Constraint, as we know, is generative, ending ironically on a word that overdetermines the subjective. You have been experiencing the poem too much. You are trying to avoid poetic experience. The squeezing of constraint distends the poetic field (spatiotemporally) as it simultaneously flattens and evens it out. We might say at this point that a maximally entropic field brings us closer to the contradictions of poetic science: a poem cannot be scientific, science can be poetic. Incidentally, ‘Entropy,’ the word, finds itself in the 1964 poem ‘train’ (4-5 Dec), equally austere:

The ambience here is casual austerity. The unusual entropy of the train ruled by atoms swerves past another train (a more social train [and with an ostrich in it]). But this train you are on is taking you on an intricate casual holiday. Holiday rhymes with entropy which rhymes with genealogy. Or sort of, because we are constructing an intricate genealogy of rules: precisely that procedural genealogy (or ecology) of austerity we are trying to invent.

Then there is bookwork: another kind of austerity that is less procedural and more about notation, making record, marking time, bookkeeping as a kind of writing practice. In The Virginia Woolf Poems, which largely used Woolf’s writing as source materials for various procedures, Mac Low provides a description of the notebook on which some of the poems were written. Written in his wonderfully dry tone, we get the following:

The series occupies pp. 22 thru 35 of a 5¼” x 8½” notebook with a black leatherette cover, on the front of which ‘RECORD’ is stamped in gold capitals. Its blue-lined pages have red vertical margin lines ruled ⅞” in from the left edges & are numbered ‘1’ thru ‘252.’ My name, the date 16 August 1967, & my Bronx address & phone number then appear on the inside of the front cover, but are crossed out & followed by ‘5 October 1975’ & my present Manhattan address. Page 1 begins:

Pages: 1 2 3 4 5
This entry was posted in ESSAYS and tagged A J Carruthers, Hanne Darboven, Jackson Mac Low, On Kawara. Bookmark the permalink.
a j carruthers is an Australian-born experimental poet and literary critic. carruthers is a researcher at the Australian Studies Centre, SUIBE, Shanghai, and is author of Stave Sightings: Notational Experiments in North American Long Poems (Palgrave 2017) and Axis Book 1 (Vagabond 2014).