Which seems to be especially the case with the kinds of inventive reading practices Mac Low’s work (and other otherwise-work) will occasion. ‘Experimentation,’ if we are to allow it to be so, and if we open our own geometries of attention to it, ought to be tagged with ‘testing,’ ‘hypothesising,’ of ‘proofing.’ Minimalism surely is as an aspect of Mac Low’s testing here, but if it is minimalism, it is minimalism together with all the innovations taken through permutational and combinatorial practices around a nexus of ‘procedural form,’ apropos Joseph Conte, resulting in something close to maximalism. There is a tension between the heaviness of austerity and the lightness of fractal experimentation that doesn’t quite buy, or doesn’t add up just yet (I’ll diagram it later). Put bluntly, a disorganized mind is still organizing.

t s also a lesson n the separat on of words. nstead of try ng to str ng words together, nto phrases, sentent a, clauses, paragraphs, we can now solate words, exam ne the r nd v dual beauty, how they behave when they are, s mply, words.

I apologize for the disruption. That’s what happens when you try to do close readings without the ‘i.’

The Disciplinarians: Mac Low with Hanne Darboven, On Kawara

The time now is, or was 4:34PM, on 7 Jan, 2016. I am visiting the artist Ruark Lewis in his studio. Open before me is an enormous, limited edition of Hanne Darboven’s Urzeit/Uhrzeit (New York: Rizzoli, 1990). As it is taken out of its case, there is a sense of awe, but also something queerly amusing: 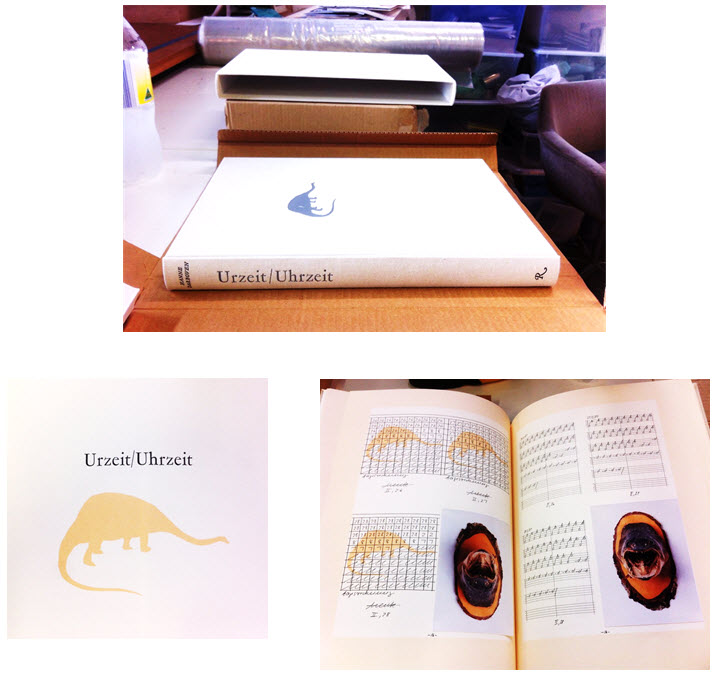 The bulk of the pages in this book of Darboven’s are scores, printed alongside handwritten calendars superposed on dinosaur silhouettes. Dinosaur silhouettes?! Some pages have ‘tippings,’ as can be seen above (the photographs of fish heads inserted into the book). The scored elements are curious because they are not collagistic, and though they are oriented for performance (much of Darboven’s work was performable, some of it recorded), they are both scores and indices (I am starting to see less of a distinction between them), whose repetition pre-dates and determines sonic elements. Dates and sums become ‘mathematical music’ (as Darboven herself put it).

In 1968, Darboven wrote Lucy R. Lippard that the only way she could continue was by having a system.

Then in 1973: Schreiben, nicht beschreiben. Also translated as ‘I inscribe, but I describe nothing.’

Amine Haase asks Darboven: ‘Is the concept underlying your work a principle of rejection?’ She replies: ‘In a way [it is] denial, otherwise an allusion. But, above all, rejection of form of expression. I use no forms of expression’ (1981).

Taken together, this combination of elements suggests not only a practice of austerity, but also indicates a point in history in which it became possible to reject expression and representation in one fell swoop. We could, further, read the installations en bloc or framed sequences covering the walls in grid-like structures, as both exhibiting a psychical ‘rejection’ and a social inscription of modernity. Margarita Tupitsyn has sited (and sighted) the grid as a checkpoint for modern art and, by extension, its relation to modernity. The grid, for Tupitsyn, installs, sometimes literally, an abbreviatory logic of spectatorship. She writes that:

The modernist grid in its very structure is an opponent of mental and visual disorientation, and its subsequent marriage with documentary (factographic) material (made in Russia by constructivists and in Germany by the Bauhaus artists) changed the grid from being a structure of an ‘abbreviatory optic’ to being a tool for attaining what the Bauhaus artist Herbert Bayer called ‘the extended vision’. It calls for a constant flux of forms and media, and yet prescribes in order to preserve one’s system of thinking. Postmodern artists were the last to adopt collectively this second function of the grid, the paradigm of art making, now melting, like arctic glaciers, in the global space of political, economic, and social uncertainty.

Testing Darboven’s gridded installations according to Tupitsyn’s logic, we might catch something of the global, sociotextual or sociomedial function (or cultural urgency) of this ‘abbreviatory optic.’ Beyond philosophical work, beyond the pure documentarian zeal of the archivist, the modernist abbreviatory optic seems to be holding up against the melting glaciers of global cataclysm. Perhaps we can (now) rehistoricise the contemporary grid as reflective of these socio-economic actualities. Because we are no longer being modernist. We need to ask, in the contemporary moment, how the extended vision, how all that expanded gridwork, might show up all these contradictory links between aesthetics and capital flows, nature and culture, money (now crypto-currencies, too), and, crucially, debt. Miriam Schoofs likewise links the material form of the book to means of artistic production and mechanicity developed earlier in the century:

Darboven sees writing simply as an operation that takes place according to strict rules, in a manner reminiscent of the mechanization of the art production process in Concrete Art and Minimal Art. The serial repetitions, variations and accumulations of numbers, texts and undulating lines in Darboven’s work articulate a rational structure that is seemingly mechanical in origin. This rational structure has no beginning nor end, and unfolds with an impersonal and rational regularity. This allows Darboven to ‘scribe without describing’ − that is, without communicating any meaning other than that of the figure or written picture: ‘Texts can also be accommodated by this approach, allowing them to be rendered in a concrete way.’ Hanne Darboven did not accept to call her books artist book (sic). For Hanne Darboven, the medium of the book was an equivalent of the work itself made in a more concrete way, as one of its possible materializations.1

Despite the rationality of her structures, their unslippery, almost chronophilic fixity, Darboven is, or was (it’s hard to get the tenses right with one’s key influences) an artist of the endless vision. My own fascination with Darboven came at a time when I was looking both for some sense of order in my practice and a way to keep going. It was just when I had begun thinking about writing as artistic practice (that could both be (pleasurably) mechanistic / organised and giving a new sense of the Book) in preparation for an art and language exhibition at the SNO Gallery (Sydney Non-Objective), where I would exhibit some pieces (AXIS works, part of my lifelong long poem project) that were inspired by both Darboven and certain scores by Mac Low.

In their final form these works were hung as pictures, as scores to-be-looked-at (eyeared) as much as sounded (at the opening they were, obliquely, performed with austere chanting of the time and date [which the performers Jessica Wilkinson, Toby Fitch and Amelia Dale then inscribed onto the frames of the piece, as you can see in the image below] in the spirit of On Kawara’s date paintings, works begun, like Darboven’s in the 1960s at the inception of conceptual art): 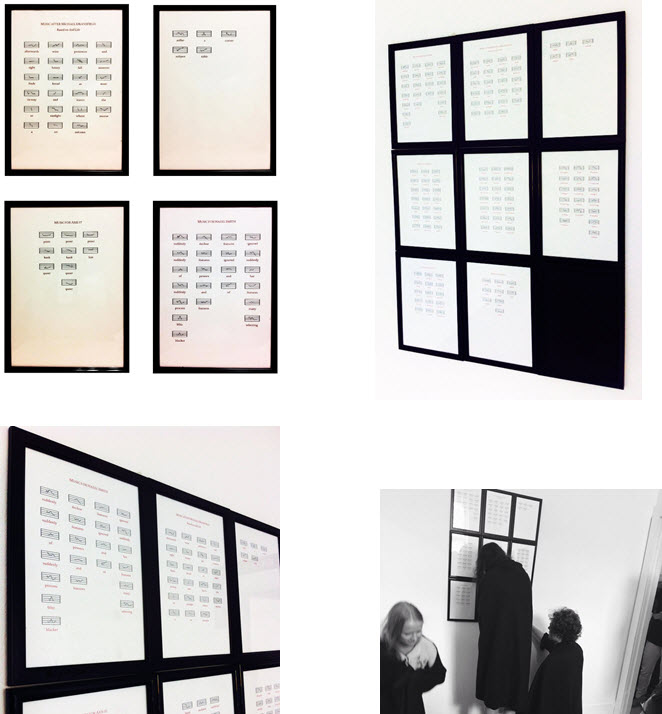 And could not decide which was better, except that it seems good to have both. Fractal would be better represented by the kinds of expanding symmetries that MS Paint didn’t allow for. We will get better accustomed to this (can we yet imagine a fully fractal poetry? Retallack has, via Benoit Mandelbrot).

8:02 PM, 3 Mar 2016. It was only later that I remembered a series of Mac Low’s performance scores in a similar vein, from ‘Homage to Leona Bleiweiss’ (the Bleiweiss of the poem examined previously). There is a certain perfection when this piece finds itself using a third column (the series mainly consists of two columns of scores that ‘spell-through’ each word/stave using a precise letter-neume equivalence). Counting to three (from two), and then to four sounds simpler than it is. There are two versions here of Mac Low’s ‘Homage,’ a handwritten version and a typeset version: 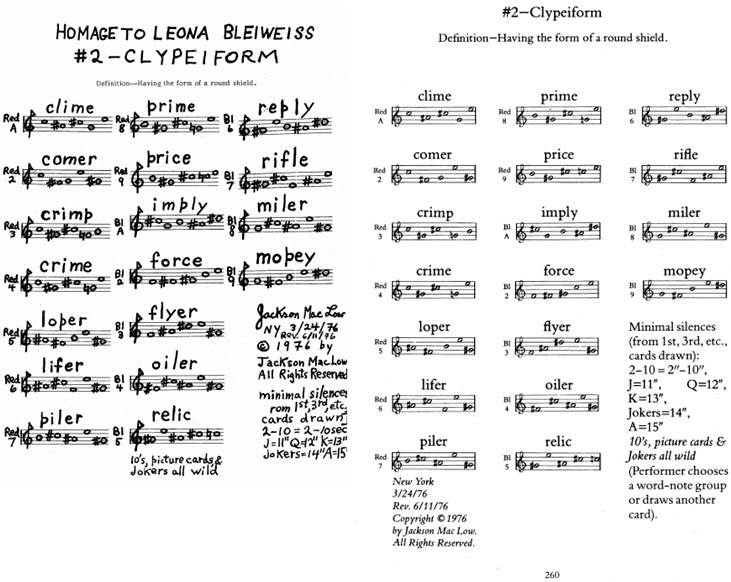 Pages: 1 2 3 4 5
This entry was posted in ESSAYS and tagged A J Carruthers, Hanne Darboven, Jackson Mac Low, On Kawara. Bookmark the permalink.
a j carruthers is a poet, performer, critic. Recent works are Axis Book 2, the recorded sound-poem Consonata, and visual works all published in Canada: MS Word Variations 1-11, EPSON L4168 consonant studies (Banff: no press) and The Blazar Axes (Calgary: Spacecraft). Is working as Assoc. Prof. at Nanjing University, in China.