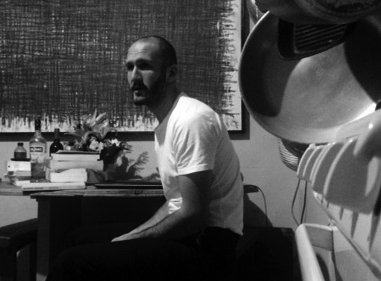 What can the original concepts underpinning psychogeography lend to a discussion of the relation between poetry and place in contemporary Australian poetics? Can the Paris-based wanderings of Guy Debord and the Situationist Internationale (SI) bring to the fore new meanings of being and creating in urban Australia? To delve into these questions this essay conducts a psychogeographic reading of Carmine Frascarelli’s 2016 book, Sydney Road Poems (Rabbit Poets Series), using key concepts put forth by Debord and the SI. Through such an approach, I believe particular psychogeographic motives – often of a political nature – will allow for a more comprehensive understanding of the approach taken by Frascarelli in writing his poem. Beginning first with a short historical survey of the interrelation between walking and artistic creation, and how Frascarelli’s writing practice can be regarded in this tradition, the essay will then use the SI’s concepts of dérive, the idea of play, as well as touching on detournement and the effects of collage, to demonstrate how a psychogeographic writing practice can be considered a socio-critical tool – one which has allowed Frascarelli to re-imagine place through a de-spectacularisation of society, or more specifically, Sydney Road in the Melbourne, Australia suburb of Brunswick.

Written in forty-seven poems, the sequence juxtaposes the history of Sydney Road in the Melbourne suburb of Brunswick to Frascarelli’s own observational writings of the street. In Frascarelli’s own words, the poems began being written during night time walks along Sydney Road after recurring hurtful fights with his partner (68). It was during one of these nights, while waiting for food in the street, that Frascarelli heard everything begin ‘to hum with a story’ (68).

The idea of walking, of being out in the world, as a catalyst to thought and artistic creation, is not a new idea. As early as the 19th century the term flânuer was used to describe a man of reasonable wealth who wanders about the streets of a city taking in the sights and sounds. Honoré de Balzac believed the flânuer considered as an artist was someone who poured ‘his experiences in the city into his work’, and similarly Charles Baudelaire believed the flânuer as artist sung ‘of the sorry dog, the poor dog, the homeless dog, the wandering dog’ (Elkin para. 4). This pouring of an urban experience into a poem, or the singing of a street’s life, can be seen, for example, in section ‘#31’ of Frascarelli’s poem

This walking approach to writing also relates to Tim Ingold’s suggestion that our knowledge of the world is not shaped by the ‘operations of mind upon the deliverances of the senses’ but ‘grows from the very soil of an existential involvement in the sensible world’, allowing us to consider the very act of being, and the writing of such being, as an inherently active way of engaging with one’s environment (3). This idea of being actively engaged with one’s environment further relates to psychogeography: ‘the study of the precise laws and specific effects of the geographical environment … on the emotions and behavior of individuals’, as defined by Guy Debord, a key representative of the SI (Waxman 133). Lori Waxman in his dissertation, Writing a Few Steps in a Revolution of Everyday Life, also goes on to stipulate that ‘changing the world was only possible by being an active participant in the world’, and that the technique which lay at the heart of all the SI’s concepts and aims was ‘reification + walking’ (111, 124). He suggests that it was this approach which allowed the SI ‘to see through the smooth façade of functionalist capitalism’ and ‘move beyond the university and a reliance on books, to get out from behind the table and go out into the world’ (111).

The SI formed in 1957 from various subversive artistic groups throughout Europe and set out to unite their political ideologies and concepts of art to develop a new approach to being and creating in the contemporary consumer world. A world which, as Adam Barnard suggests, ‘ensures that people do not engage in self-directed or autonomous activity’, and which Debord would come to call ‘The Spectacle’, or the ‘colonisation of daily life’ (Barnard 107). The SI believed that prior to their commencement, ‘philosophers and artists have only interpreted situations’, whereas the point now, ‘is to transform them’ (118). This idea of transforming situations though was not new in its own right, but was built upon ‘generations of revolutionaries and vanguardists before them, from Charles Baudelaire to the Paris Communards, from Walter Benjamin to surrealists André Breton and Louis Aragon …’, all of whom claimed ‘the street as the real space of urban life’ and demanded the right not merely to access what already exists, but ‘to create utopia in the space of their own streets’ (Waxman 92).

This approach to the environment, which sought to empower the individual with the right to change the city one lives and ‘to construct life out of one’s own desires’, Waxman compares to artistic practice (92). From this we can perhaps better understand the correlation between walking through everyday life and writing, and how it is in this tradition which I believe Frascarelli’s poem can be situated. Take the following line from the 14th section of the poem – which plays on both the influence and restriction of the page and road: 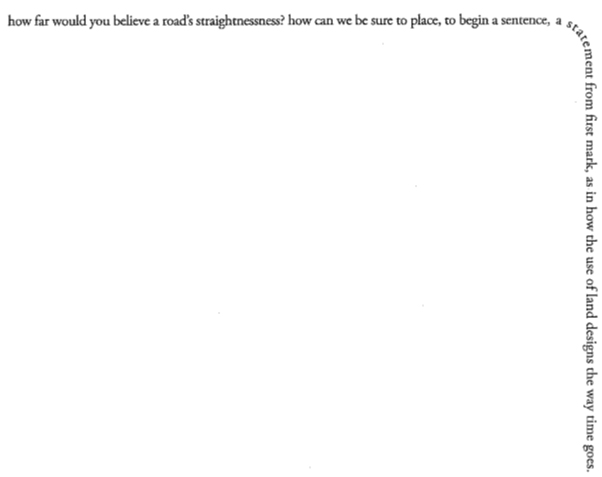 And, again, in the 22nd section, there is the playful admittance of place’s effect ‘on the emotions and behavior of’ Frascarelli (Waxman 133):

‘The walker uses the body as a divining rod’, Nandi Chinna suggests, to pace ‘through time and the city, noticing what demands to be noticed, and stitching together maps which link sense perceptions with histories in order to build a greater dimension into the narrative that defines place’ (8). Her definition of the walker relates directly to Guy Debord’s idea of the dérive (meaning, literally, ‘to drift’), which was just one of the ways the S.I. attempted to counter the idea of the spectacle and create a utopia in the space of their own streets.

Pages: 1 2 3 4 5
This entry was posted in ESSAYS and tagged Carmine Frascarelli, Guy Debord, Jake Goetz, Lori Waxman. Bookmark the permalink.
Jake Goetz lives by a drowned valley estuary on Gadigal land. His first poetry collection, meditations with passing water (Rabbit Poets Series, 2018), was shortlisted for the Queensland Premier's Award in 2019. He is currently a PhD candidate at The Writing and Society Research Centre, WSU.