In his essay, ‘The theory of Dérive’, Debord describes the technique as a ‘transient passage through varied ambiances’ which entails ‘playful-constructive behaviour and awareness of psychogeographical effects’ (para. 1). He also goes on to say that the dérive requires that a person drop his ‘usual motives for movement and action’ and let himself be ‘drawn by the attractions of the terrain and the encounters’ he finds there (para. 1). Such a dialectic, which positions the environment in a type of equilibrium with the walker or writer, can be seen in section ‘#24’ of Frascarelli’s poem, where in a ‘hungover’ state, the poet considers the scene of Sydney Road and is literally diverted away from buying a bottle of wine (what we can consider a ‘usual’ motive of going to the shop) into socialist reveries:

The two basic overlapping goals of the dérive are ‘emotional disorientation’ via ambulatory play, and ‘studying a terrain’ in terms of its psychological influence’ (Waxman 112). This disorientation via play can be seen for example in the commas between the letters in ‘pe,ople’, which both distracts from the idea of people, while simultaneously draws closer attention to the significance of language in aiding our understanding of ourselves and the environment. It acts as a study for how a particular ‘terrain’ makes us, or rather, Frascarelli feel, which in this ‘hungover’ excerpt, seems playful.

Another example of disorientation via play and the studying of a terrain can be seen in section ‘#33’, where Frascarelli contrasts hearing a mix of different languages in various shops to the idea of white settlement – followed by a discourse on how the borders humans have constructed around different behaviours ‘shroud & multiply the sadness / of self to place’ (46, lines 24-5) – and most relevantly, how Sydney Road acts as a catalyst to his attitude toward Australian identity:

When considering the forty-seven fragments as a whole we can further see the extent to which Frascarelli has studied the terrain, and uses both historical images / texts, and his own language / found language, as a form of ‘serious play’ – a key guiding principle within the SI’s experimental activities that sought to create ‘ambiances which would help turn everyday life itself into less of a pre-programmed, bureaucratic repetition of métro, boulot, métro, dodo, and more of an unpredictable, inspiring series of situations and encounters’ (Waxman 147).

Eleven of the forty-seven fragments in the poem begin with exact years, as opposed to numbers, challenging the linearity of history by intersecting it with Frascarelli’s own more personal writings of place. Throughout the collection we also read of various events that happened on the street, such as a riot in ‘1896’, which features photocopied newspaper headlines behind the text of the poem: 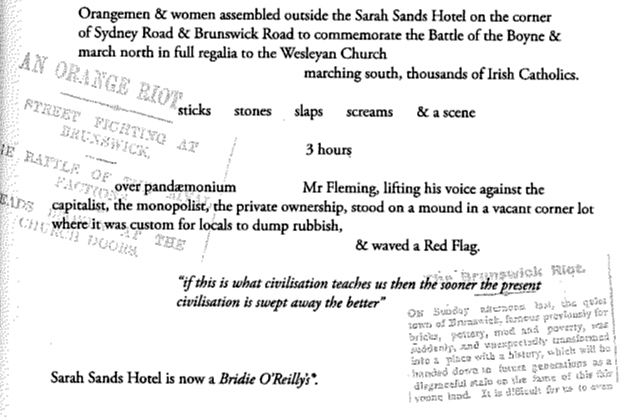 Another section, ‘#25’, digresses upon the origin of the suburbs name by stretching back into a story of the relationship between Caroline, Duchess of Brunswick, and King George IV. This section is stirred on by Frascarelli’s reading (and detailing of his reading) the following plaque on Sydney Road: 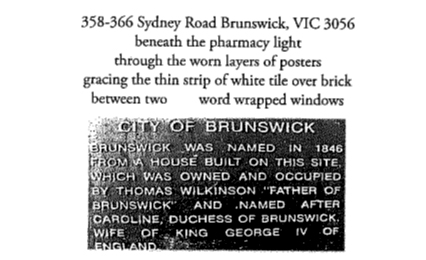 Through rendering the diverse layers of a place across time and space, Frascarelli brings the past into the present with immediacy. Another example of this can be seen in the protests against the Gulf War that took place in (section) ‘1991’, with Frascarelli collaging multiple quotes (from Bob Hawke to the Brunswick town mayor) as a way of re-comprehending both the local Brunswick communities attitude toward the war, and the nation’s as a whole. These more factual depictions of Australian history are also most often juxtaposed and subjugated to the poet’s own perspective. For example, in section ‘#29’, after seeing a Boer War memorial the poet meditates on the current Gulf war he hears as ‘a short song of blood’ in ‘each passing engine roar’ of a car (39, lines 32-33). These lines refer to the reasons surrounding the Gulf war, which a quote from Bob Brown in section ‘2003’ more obviously states: “… this is not Australia’s war. This is an oil war …” (48, line 3).

Pages: 1 2 3 4 5
This entry was posted in ESSAYS and tagged Carmine Frascarelli, Guy Debord, Jake Goetz, Lori Waxman. Bookmark the permalink.
Jake Goetz lives by a drowned valley estuary on Gadigal land. His first poetry collection, meditations with passing water (Rabbit Poets Series, 2018), was shortlisted for the Queensland Premier's Award in 2019. He is currently a PhD candidate at The Writing and Society Research Centre, WSU.