Welcome to Creative Commons, the thirty-third issue of Cordite Poetry Review! With this issue we celebrate our tenth year online, and while that might not seem such a long time ago, consider that way back in 2001 FaceBook, WordPress and MySpace hadn’t been invented yet; neither had the Web 2.0 practice of joining capitalized words together to make BrandNames; and blogs were so far outside the mainstream that not many people even knew what they were, or whether they should care.

But enough about history. Here at Cordite we’ve always been about looking ahead, even when we have no clue as to what lies in wait for us. Yes, it’s all about “moving forward”, to use that asinine phrase much abused by the current LaborParty (sic) leadership. But it’s about more than that. It’s about trying to get as far away from the past as possible, in the least possible time. You might think of it as staying modern, and that’s fine with us.

Staying modern is also part of the reasoning behind our modest site revamp, the design for which is based on the standard Twenty Ten theme that now comes with every download of WordPress 3.0. Love or hate it, let us know. All we hope is that the darned thing works. And after ten years of fiddling with source code, cascading style sheets and various content management systems, expecting a website to work seems like a not unreasonable demand. 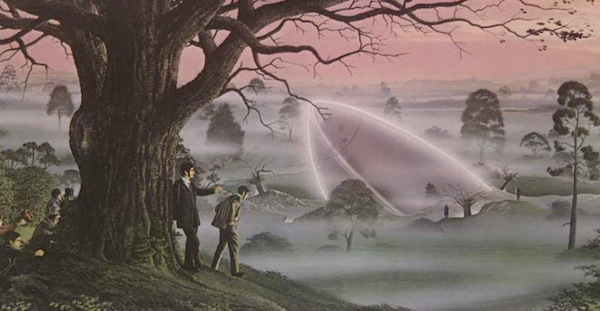 Peter Goodfellow, “On Horsell Common”, album artwork from Jeff Wayne’s musical version of The War of the Worlds.

As for the contents of Creative Commons, in lieu of a proper editorial from our guest poetry editor Alison Croggon, let me just say that I’m thrilled at the diversity of the talent on display in this issue. Thirty-odd poets writing in a range of styles, from good old free verse to the (emerging?) bullet-point-list-poem genre; from the nautically-themed epic to an avian short form poem; and from google-flarf to split DNA strands that look like jeans.

I could go on in much greater detail but the real joy lies in wait for you, dear readers. Despite our usual practice of calling for poems on specific themes, for this issue we decided to open submissions to all forms, in the spirit of Creative Commons. And it is in this spirit that we have now made the poetry in this issue available as downloadable Word (and text) documents, so that you too can share in the fun.

Inspired by Creative Commons Australia’s Remix My Lit project, we invite you to download these poems, remix them, chop them up, add a little gravy and generally act like a word salad DJ. Then simply send your remixes to us, and we’ll publish the best ones right here on the Cordite site, under a Creative Commons license.

If that all seems like too much hard worK, there’s a wealth of feature content available in our thirty third issue as well. We’ve got ten new feature articles, including five takes on creative commons and copyright, and a special feature on Jonathan Ball’s Ex-Machina project. We’ve also posted six new audio tracks, a couple of images and our usual fortnightly reviews. Also, be sure to check out the slowly unfolding Zombie Haikunaut Renga, or add your own ku!

On behalf of our contributors, our guest poetry editor Alison Croggon and my fellow Cordite editors, I sincerely hope that you will enjoy this bumper issue. We’re certainly very proud of the direction in which the magazine is heading, and hope that you’ll consider joining us, on Creative Commons.

“But it’s something more than a meteorite. It’s a cylinder — an artificial cylinder, man! And there’s something inside.”

This entry was posted in ESSAYS and tagged creative commons, David Prater. Bookmark the permalink.
David Prater was Cordite's Managing Editor from 2001 to 2012. His first poetry collection, We Will Disappear, was published by papertiger media in 2007, and Vagabond Press published his chapbook Morgenland in the same year. His poetry has appeared in a wide range of Australian and international journals, and he has performed his work at festivals in Australia, Japan, Bulgaria, Canada, the United States, the Netherlands and Macedonia. He has also undertaken two writers’ residencies in Seoul, Republic of Korea, and has worked extensively as a teacher, editor and researcher. He currently lives in Stockholm, Sweden.