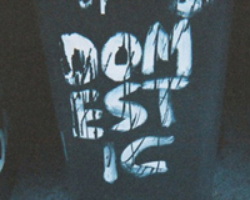 Our 21st issue, Domestic Enemy, sees Cordite finally obtain its majority! From our humble beginnings in 1997, it's been a long and dusty road, filled with many pit-stops, refuels, vehicle and driver changes, roadblocks, fake abductions, detours and [insert your own road-related images/metaphors here].

Domestic Enemy is filled with the usual swag of poetry (including a special robopoetry feature), interviews and reviews. Rather than me listing the contents of the issue all over again, may I suggest you visit the index page?

The publication of #21 also brings another chapter of Cordite's history to a close. As of the completion of this issue (and its attendant paperwork), we will have successfully acquitted our third grant from the Australia Council for the Arts. We thanks the Literature Board for their faith in Cordite and their generous funding, which allows us to pay contributors and keep the magazine online.

The achievement of publishing 21 issues, which fills us with a kind of wonder, has been due in no small part to the work of our volunteer editors. To this end, our next issue, #22, will be entitled EDITORIAL INTERVENTION and will feature the work of various Cordite editors as well as poetry editors from Australia and overseas. In keeping with the voluntary nature of most editors' work, no contributors fees will be paid for this issue. Expect its appearance online in July.

An announcement will be made upon the publication of #22 as to the future of Cordite. Rest assured that we remain committed to publishing the work of Australian and international poets in a globally-accessible format. In the meantime, consider leaving a comment on our new newsblog. It actually works now.

This entry was posted in ESSAYS and tagged David Prater. Bookmark the permalink.
David Prater was Cordite's Managing Editor from 2001 to 2012. His first poetry collection, We Will Disappear, was published by papertiger media in 2007, and Vagabond Press published his chapbook Morgenland in the same year. His poetry has appeared in a wide range of Australian and international journals, and he has performed his work at festivals in Australia, Japan, Bulgaria, Canada, the United States, the Netherlands and Macedonia. He has also undertaken two writers’ residencies in Seoul, Republic of Korea, and has worked extensively as a teacher, editor and researcher. He currently lives in Stockholm, Sweden.