The West: Australian Poems 1989-2009 by John Mateer Fremantle Press, 2010 Since the publication of his startling first collection Burning Swans in 1989, John Mateer has established himself as one of the key Australian poets who, for the absence of … 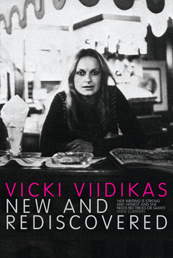 In May 2010, Melbourne-based publisher Transit Lounge will release a much-anticipated collection of published and unpublished poetry and prose by the iconic Generation of '68 poet and l'enfant terrible, Vicki Viidikas (1948-1998). The book, simply titled Vicki Viidikas: New and Rediscovered, has been edited by Transit Lounge co-founder Barry Scott. Cordite's reviews editor Ali Alizadeh spoke to him about Viidikas, her iconoclastic work, her unconventional life, and her legacy.

la, la, la by Tatjana Lukic Five Islands Press, 2009 With the success of novels and short story collections such as The Slap and The Boat, it seems multicultural writing is enjoying something of a revival in Australia. Yet poetry …

When ‘Epic' was suggested as a theme for an issue of Cordite, I was expecting it to be either rejected outright or at least modified into something less archaic. When it was actually chosen as the theme for issue 31 with myself as the guest editor, I was faced with a more pressing concern: would we receive enough suitably epical submissions to justify our choice of this theme? Or would the dearth of appropriate contributions confirm that, as literary critic Tom Winnifrith has written, the epic is ‘as antique as a dinosaur', or, as Mikhail Bakhtin would have it, the epic poem is ‘an already completed genre … distanced, finished and closed'?

John Kinsella’s most recent book Divine Comedy: Journeys Through a Regional Geography is an incredibly ambitious and meticulous rewriting of that great epic poem of the Middle Ages, Dante's The Divine Comedy. Our guest poetry editor for Epic, Ali Alizadeh, interviewed Kinsella recently, via email. Their discussion ranged from traditional notions of the epic form, and Kinsella's relationship with it, to ecological manifestoes and collaborative projects, and the concept of 'pushing against form'.

She and the fire fight adjectives. Their concreteness deflects reification by language. She simply is a pronoun. It may signify say, my wife (coming from me 'she' often does) or, yes a medieval French woman, her being so roughly abridged …

Networked Language: Culture & History in Australian Poetry by Philip Mead Australian Scholarly Publishing, 2008 Once every decade, it seems, a scholar succeeds in writing an all-encompassing account of the practice and development of poetry in modern Australia. The 1980s …

Hidden Signs of a City

How does one read a city? More specifically, how does a poet decode, and in turn re/present, the language of a man-made space? In Australia (and other 'New World' constructs) much poetry has been devoted to the natural world; but …

That Little Something by Charles Simic Harcourt, 2008 An interesting aspect of Serbian-born Charles Simic's being chosen as the United States' 15th Poet Laureate is that Simic, partly due to his experience of a European childhood during the Second World …

Over there, in the Other land, I was gharb-zadeh, Farsi to the effect of west- smitten. Over here, in 'Our' land, I am Muslim immigrant, nomenclature with grave allusions: unemployment, anger, and unpredictable police attention. Over there I was an …