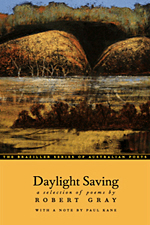 In ‘Minima’, Robert Gray writes that ‘the senses can mislead us, / … when we rely on only one of them.’ Gray himself is in no danger of being misled. The dimension of synaesthesia in his perceptions has been widely noted, but it manifests itself in this collection as something both chronologically prior to, and conceptually broader than, the apprehension of one sense through another. In these poems, the synasthaesic crossover is on a continuum with other comparative and synthetic impulses: not only does he compare, for instance, ‘bird-song’ to ‘wandering lines of wet paint’, he also observes how the same shapes emerge in objects of different substance and scale, how the same ordering principles work in divergent contexts: ‘the wind paths, beyond the breakers, run out / across the water, / sinuous and spreading, like the arms / of the open eucalypts.’

In his forenote, Paul Kane explores the Buddhist inflections of Gray’s figural thinking, reflecting that the work of juxtaposition, apposition and comparison in his poetry is grounded in a Buddhist sense of underlying shared qualities. Rather than creating externally-imposed connections, his poems are ‘moments of revelation or unconcealment’. While the collection is aimed at American readers, this sense that the comparisons he draws existed prior to their poetic articulation is part of the book’s particular power for readers familiar with the places described.

The source of the exultation is the accord between the personal experience of a world and an artistic representation of it, and this same process, in reverse order, animates the reader’s encounter with Gray. It is not simply that Gray’s observations match our own: in the most interesting cases, we don’t have anything there to match. What Gray does is render explicit those impressions in us which might otherwise remain unconscious or inchoate. His description of the Australian landscape mounts a freeze-frame over our unedited reels of memory, bringing to our attention the moments we didn’t know to record.

This poetry of the ‘momentary mind’ is one of tremulously alive, circumscribed scenes: we usually know what time it was and what the light was like. What is particularly striking in Gray’s annotation of perception is that the poems often house dramatic juxtapositions in poised, grammatically intricate phrasing. In ‘Home Run’ the description of the view on the North Coast Line emerges in calm chronological order, its astonishing images scalpeled into diligent prepositional phrases: ‘The sea / is as blue as ink, or as a dye, newly pulped, / from out of which a great billow of fabric has been lifted, / the slightly lighter sky’; ‘there is a knoll / … / … / from the top of which the long grass streams’. These unblinking phrases have the effect of a full house gently displayed; the off-duty speech of a mime who forgot his painted face, as the poems matter-of-factly handle the torsions of ‘a downpour that is splashing up ferns’ or the Romantic expansiveness in ‘a sheen on the night and across the ranks / of water, / and close mountains that joined moonlit earth and sky’. The reality principle evident in both his empiricism and his unhysterical grammar means that when he writes of ‘the feeling that I wear great wings/ while stepping along the earth’, we believe him, and are recalled to our own.

This entry was posted in BOOK REVIEWS and tagged Bridget Vincent, Paul Kane, Robert Gray. Bookmark the permalink.
Bridget Vincent completed her PhD at Cambridge University as a General Sir John Monash Scholar and then held a McKenzie Postdoctoral Fellowship at the University of Melbourne and an Endeavour Research Fellowship. She is now an Assistant Professor in Modern Poetry and Poetics at the University of Nottingham and was recently awarded a British Academy Rising Star award for a project on literature and attention. She writes on poetry and ethics, with particular attention to the writings of Geoffrey Hill, Adrienne Rich, Seamus Heaney, and Judith Wright. Her first book, Moral Authority in Seamus Heaney and Geoffrey Hill, is coming out with Oxford University Press in 2021. She also writes creative nonfiction and opinion pieces, and has published these in The Guardian, the Times Higher Education and the Age.