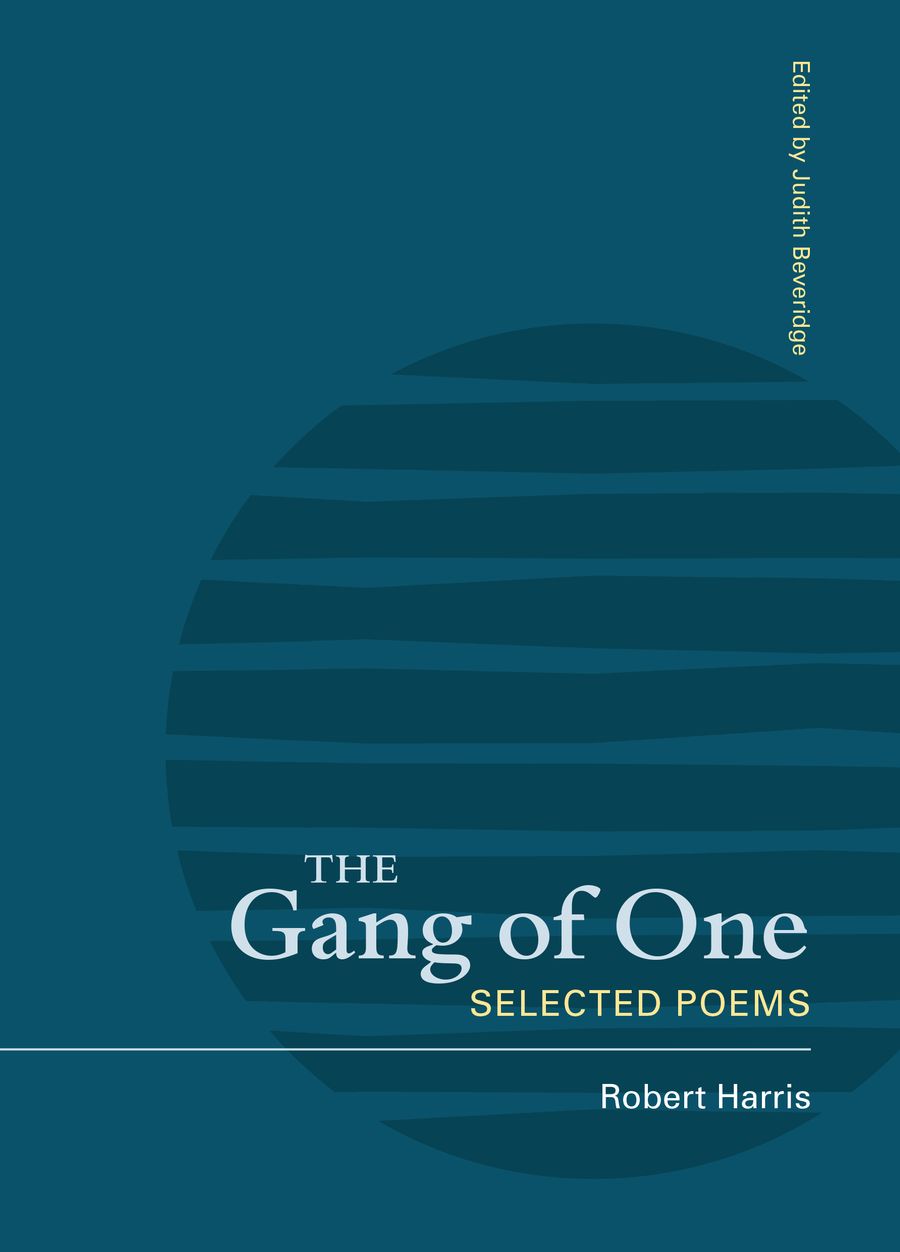 The Gang of One: Selected Poems by Robert Harris
Grand Parade Poets, 2019


In ‘The Day’, Harris writes a stunning eschatology for Gough Whitlam. For Harris the dismissal was ‘the day of deceit’, ‘the day to lose heart’. As I write this review, I too am demoralized and anxious, despite the beta-blockers. In the crisis of another general election, the causes of a progressive and civil society have again been defeated. And in our election wash-up, the ALP seeks a new leader. Tanya Plibersek, our Kiwi-model hope, has already withdrawn her candidacy for the top job, citing family reasons (this does not appear to be an obstacle for her male colleagues). In this society, is any male (really) a ‘gang of one’? And while I hear the self-referential humor implied in the title, I also find myself butting up against its hyperbole: the allusion to romantic nonsense of one-off, singular (almost always male) creative genius. Will Connie Barber, Barbara Fisher and Grace Perry (amongst so many others) also be recognized/celebrated with the Selected/Collected milestone?

This being said, Harris is an incredible poet of place, of faith, of historical sequence; and many of his poems’ endings shimmer with all the ecstatic vibrancy of Hopkins (or Murray). I do not believe in miracles, I was grown in Baptist/Pentecostal faith traditions, but this book is miraculous – a triumph of its (crowd funded) gang of supporters. And I am so joyful that they have introduced me to this poet.

In writing place, and its settlement, Harris is capable of juxtaposing such lyrical imagism with strongly interrogative purpose. ‘The Dancer’ is a very fine example. Here the poem-sequence is centered less on narrative momentum, and more on an almost surrealist automatism and fizz of unforgettable imagery:

But this is also a place ‘before Cook’ where: ‘You have guessed Cook is a cipher / (but of what forest, my dear little trees)’. Historical perspectives might be as beautiful as ‘trout become water’:

This lyrically interrogative intent is continued in ‘Clear Days in Winter’, another beautiful poem of place that is also attuned to ecological concerns:

There are so many major poems of place in this book, all hinting at mystery and the exquisiteness of ‘creation’ while also adjusted to postcolonial/ecological commitment. There is ‘Concerning Shearers Playing for the Bride’, which is also a poem of ekphrasis in response to Arthur Boyd; and the poems of North Queensland sugarcane country: the sequence ‘Cane Country’; and ‘Canefield Sunday, 1959’. These poems are fueled by a searching necessity for a Treaty with First Australians, for social justice, and by such dramatic and vivid descriptive language. This is a poet, with strong convictions, in love with the world in which he finds himself.

This ecstatic vision is most evident in the way Harris ends poems. In ‘The Call’, a poem evoking the ‘eye of summer’, he concludes:

While ‘The Snowy Mountains Highway’ finishes:

These poem endings are unforgettable in the way they employ concrete imagery and sound to express such delight and wonder towards ‘God’ and the world ‘he’ has created. It is difficult not to be seduced by the simplicity and beauty of this language, but of course, this language also raises difficulties.

I still remember the first time I read Les Murray’s majestic ‘The Last Hellos’. I was a young adult (desperately) trying to maintain my faith, and this poem reduced me to tears. It is a beautiful hymn of love written for Murray’s father who had just died. In this delicate eulogy Murray addresses his father concluding (with a dramatic crash):

Like Murray, Harris seems to enjoy championing the unfashionable cause of God (though he is obviously more progressive in his politics); and in these convictions both leave me nostalgically longing, but also cold. In writing a poetics of faith Harris and Murray prioritize the role of individual submission to God, neither one examining their faith too closely, or asking difficult questions. In Harris this is especially problematic, because his progressive politics would seem to be so often in conflict with his obedience to God.

In ‘The Cloud Passes Over’ Harris writes a magnificent hymn of praise for rejuvenating rains. This is rain that breaks riverbanks as ‘water flows sideways / from faucets outdoors’:

Leaving aside the issue of Harris’s non-inclusive language, in focusing only on God as the source of creation and renewal, this beautiful hymn of praise is not entirely honest. This ‘Lord of all / is at large throughout His creation’ as judgment and death also (flood). ‘He’ was never only about love and life – there were always strings attached.

Pages: 1 2
This entry was posted in BOOK REVIEWS and tagged Phillip Hall, Robert Harris. Bookmark the permalink.
Phillip Hall lives in Melbourne’s Sunshine where he is a passionate member of the Western Bulldogs Football Club. His publications include Sweetened in Coals (Ginninderra Press), Borroloola Class (IPSI), Fume (UWAP) and (as editor) Diwurruwurru: Poetry from the Gulf of Carpentaria (Blank Rune Press). He is currently working on a collection of ekphrastic poetry, inspired by an Objectivist poetics, which celebrates Melbourne’s western suburbs while tackling such issues as mental health and sport as performance art.