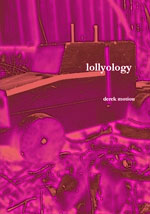 The title of Derek Motion’s recent poetry collection lollyology alludes to a theory of lollypops. If, as Urban Dictionary suggests, a ‘lollyologist’ (lollypop maker) is also street shorthand for the ‘most pointless job position in the world’, then Motion is willing to elevate this ‘pointlessness’ to a field of study, or perhaps an art. I’m not sure if this is intended as a comment on poetry and poetics, though with its lurid purple cover image of a toy truck the tone and aesthetics of lollyology appear punkish and juvenile, in a Bow Wow Wow ‘I want candy’ kind of way (although Motion’s ‘indie’ points of reference are more likely The Lemonheads, Dinosaur Junior and ‘another canberra bar / josh pyke’). Indeed ‘one’, the first poem of the collection, is set at a kids’ birthday party after seven beers: ‘(light plays over a cake it’s an eight it’s/shaped like a race-track’. The theme of a perpetual childhood, persisting despite external trappings of adulthood, pervades the collection.

The trope of the poet as an eternal adolescent is continued in the second poem of the collection, ‘gumi’:

As someone who grew up in Wagga Wagga – both Derek and I went to Wagga High, though several years apart – the reference is one I’m familiar with. An institution in the late 1970s and 1980s and recently revived, Wagga’s gumi races involve floating down the Murrumbidgee river on inflatable rafts. ‘Gumi’ is a love poem – ‘i’d take a bag of flour in the face for you’ – penned by a regional troubadour observing the gumi from his vantage point, possibly perched high in the branches of a river gum. This is as transcendent as this local poet gets.

The old-fashioned, almost timeless image of Australian regional identity (‘tether my dog’) collides with modernity’s ‘plastic afternoon machine’. I’m not entirely sure what the poet is referring to here. Is it a gumi (but surely that would be a rubber afternoon machine) or a computer (Motion is, after all, quite a prolific internet user), or is this ‘plastic afternoon machine’ the mise en scène of the poem? If that is the case, ‘don’t even laugh’ becomes a plea to the beloved to accept him as a poet – something that could be considered ‘wanky’ in local idiom. Motion’s ‘love language’ has it both ways: its youthful (possibly masculine) linguistic reticence (‘i’ll scrawl your/initials on a crusted pylon’) contrasts with the complex syntax of the artefact of the poem.

Fast becoming a poet of the Riverina (he’s now based in Leeton) Motion’s poetics are not necessarily landscape-based in any conventional sense; though, as he jokingly writes in ‘fate of the species’, ‘(secretly poet x & i do battle for ‘Riverina Country’/where Cod would eye you if they could)’. Yet Motion is not preoccupied by fishing – he’s not out to give Robert Adamson and Anthony Lawrence a run for their Waggafish money – and, given that the regional city of Wagga is predominantly suburban, his poem ‘observational #8 (commodore V8)’ instead depicts a local landscape of ‘finite police-cars embedded in a stray hill, here & there’. Any adult closure – ‘i slam the car-boot with a final emphasis’ – is again undercut by a state of ‘overwhelm’: ‘i hope to make more sense of things -/the objects, the projects, the overarching directions – this month’.

If the poet is interested in any form of retreat from modern life, it is not the quietude of the rural mode that he returns to, but his local primary school after dark (‘forest hill’) where he unearths a time capsule:

The poem becomes a form of amateur archival footage for a Lost Wagga:

Keri Glastonbury is a Senior Lecturer in Creative Writing at The University of Newcastle. She completed a Doctorate of Creative Arts at the University of Technology, Sydney with a thesis titled: ‘Shut up, nobody wants to hear your poems!’. She has previously published two poetry chapbooks: Hygienic Lily (1999) and super-regional (2001) and her first full-length collection grit salute was published in 2012. Her collection, Newcastle Sonnets, was published by Giramondo in 2019.

View all posts by Keri Glastonbury on Cordite →