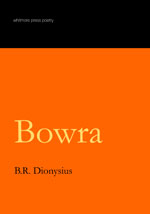 B.R Dionysius’ Bowra is a collection of fifty-two prose sonnets of sustained intensity and engagement with place, from the fringes of southeast Queensland’s urban sprawl, west to Cunnamulla, with excursions to California and Kazakhstan. These poems count the human and environmental cost of various man-made tragedies.

The fourteen-line constraint works to unravel an anecdote and/or piece of narrative sequence at once self-contained and part of the larger ambition of the book: to serve as a selective local history. The consistently restive and physical language is as uncompromised, and at times bewildering, as the landscapes and situations it describes.

Dionysius proves himself a poet of roads, heat and distances. Phrases spill off the longish line, with the momentum of hard cornering. Straightforward syntax works harmoniously with the rhythms of the poems. The book’s opening line, ‘Our son pisses on the rental carpet and Dot Porter dies’ plants us squarely between the book’s twin concerns: death and spoilage. Sequences are dedicated to various Ipswich locals deceased in extraordinary circumstances. Roads, rivers, tunnels and Time are vectors for these preoccupations; an admixture of elegy and ennui course through them, visibly spilling, and scattering fatalities.

Over-enthusiastic similes swirl in Bowra’s dust-devil. ‘As though’ and ‘as if’ are used ad infinitum to forge far-fetched similarities, assuming language could spin anything into a likeness of anything else.

The Surf ‘n’ Turf is too filling. Although the comparisons are usually clear – if brash and inventive – the sheer multiplicity of associations is often hard to swallow. Flurries of contrived similes occasioned by pathos and the headlong momentum of the prose undermine the narrative thrust of the elegiac-historical mode.

War and sport tropes abound, sometimes arm-in-arm, as in junior rugby league players dressed in ‘stormtrooper white jerseys’. Pastoral visions of ‘parrots dismantling seed heads with the ease of troopers stripping down guns’ or a grey falcon’s ‘white blur missile launch’, surely don’t seek to implicate the avialae. Elsewhere, cicadas are ‘factory workers’, and roadkill results from a 4×4’s ‘high tackle’. Whether these allusions are a parochial nod, or an ironic critique of the local zeitgeist, is not always made clear. If we assume the latter, this extract from ‘Balonne Highway’ might serve as a sort of thesis for the collection at large.

Reclamation occurs via the image. In various poems we glimpse ‘bitumen’s can-opened edge’, ‘bitumen’s offal-coloured spine’ and the ‘road’s blue collar’. A young man is run over and engulfed by ‘the road’s indigo cloak’. A kangaroo’s ‘vertebrae lay twisted, like/the plastic rifling on cheap spumante corks …’. Sans military motif, the depiction of a dying emu is deft. ‘It’s hair-like feathers waterfalled to the bluestone surface in/stringy curlicues …’ (from ‘Emu’).

The second sequence, ‘A strong brown god’ (for the Bremer River), written from the river’s perspective in past tense, charts the dystrophic effect of white settlement (the invasive water hyacinth, paddle-steamers, dams) and the extremes of flood and drought. These poems deify and anthropomorphize the river, positing the Bremer as laconic, omnipotent trickster. Here is the river reflecting on two floods.

The perspective is problematic, the leap required too great. The river-god’s idiolect is recognisably that of the poet; and the poet’s hand, rather than being ‘present everywhere and visible nowhere’ – as per Flaubert’s invocation – is visible everywhere. The poem ‘1891 Walloon’ re-imagines the drowning of two ‘young ladies of the lake’. Its lilting music and air of fable echo, at a few removes, Henry Lawson’s ‘Babies of Walloon’.

Long sections recounting Ipswich miners (‘Box Flat’) and Californian schoolchildren (‘Cicada’) trapped underground seem to originate from thematic concerns, while ‘Kazakhstan’ benefits from its relative brevity (running to two sonnets) and focused account of a foreigner trespassing on the ‘mythopoetics of this old place’.

Closer to home, Bowra attempts its own idiosyncratic mythopoetics, contemporising the pastoral through mass- and pop-cultural references. At the same time, it is a most earnest work. This seems to me an unresolved tension of Bowra. Readers might also hope for more deviation from the sonnet-block, even if, in a way, it is the form that pulls us through.

This entry was posted in BOOK REVIEWS and tagged brett dionysius, Nicholas Powell. Bookmark the permalink.
Nicholas Powell’s first full-length collection, Water Mirrors, won the 2011 Thomas Shapcott Poetry Prize, and is published by UQP. In 2007, he received a Young Australian Poets Fellowship. He lives in Helsinki.