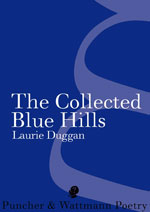 The Collected Blue Hills by Laurie Duggan
Puncher and Wattmann, 2012

I’m far too young to remember the Blue Hills radio serial, which ran for an incredible 27 years, or 5795 episodes. But in my mind, I’ve always aligned it somehow with the long-running serial of a different medium, A Country Practice, and the experience of watching on, for years throughout my childhood. Watching fictional relationships bloom and end and change, watching births and deaths, illnesses and weddings, floods and fires and droughts; and now that I’m older, I can still, sometimes, align parts of its fictional time to the timeline that I experienced in the world. And this is the power of series and the serial: that they accrue with time, and can become, eventually, a kind of history, a collection of moments, each set in and about its own temporality, each containing its own small chunk of time.

And it’s precisely this serialisation that is so delightful about Laurie Duggan’s The Collected Blue Hills. Duggan began the series as a side-project in 1980; the final poem in this collection was written in 2006. In between, we’re given glimpses – scenes, signs, thoughts, fragments of speech – of the poet moving through his time and place, or, as Duggan puts it in his introduction, a ‘graph of the mind moving:’

Where the poems work best, they’re specific and tightly focused, and operate almost as snapshots, offering points of stillness in the mess and bustle of the environments – both physical and mental – that they move through:

These poems make a claim, however quiet, for this stillness and attention as being at the very heart of poetry, and of being. …

The Blue Hills poems are often quirky and surprising because of the way they allow disparate images and registers of language to butt up against each other. Kenny Rogers sings to an electrical goods salesman, a catalogue of paintings in a gallery is broken by the observation ‘Napoleon looks like a jerk,’ and there are frequent strings of single objects and actions like ‘Movement in the kitchen. Black/ Bauhaus chair. Ken laughs’ (Blue Hills 15). There’s a kind of collaging happening in moments like these, and while the frequent disjunction does, at times, leave the reader a little adrift, the overall effect is one of happy accident, of taking pleasure in and honouring the strange and coincidental.

This pleasure in the odd and accidental detail often lends the poems a gentle satirical edge – as in ‘Blue Hills 69’, where the poet notes ‘the coffee’s good/ at the Deli Lama,’ or ‘Blue Hills 22,’ which finds ‘parks named/ after a man who discovered nothing more/ than property.’ But as the collection progresses, these details become increasingly melancholy, almost elegiac – a charting of changes and things lost, and the place and belonging that they describe becomes more complicated. The small poems, that is, slowly build up to a much larger narrative; a narrative of time and memory, of thinking and looking and being in the world, a kind of history that is happening on the sidelines. A kind of history that works, as Duggan writes, by ’drawing the same old figures (…) fused for a moment/ in broken light.’ (‘Blue Hills 51’)

This entry was posted in BOOK REVIEWS and tagged Fiona Wright, Laurie Duggan. Bookmark the permalink.
Fiona Wright is a doctoral candidate with the University of Western Sydney Writing & Society Research Centre. Her poetry collection Knuckled (2011) won the Dame Mary Gilmore Award for a first collection in 2012.