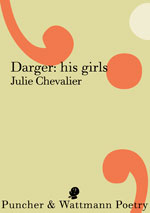 Darger: his girls by Julie Chevalier
Puncher and Wattmann, 2012

Darger shares similarities with Jordie Albiston’s The Hanging of Jean Lee, primarily that both writers use form to express character in poetic biography. The collection begins sparely when Henry is four years old, and the opening poems contain first person accounts followed by short nursery rhymes in the third person:

However, Chevalier hits her stride when writing Darger as an adult, as he obsesses through his writing and paintings about saving little girls from gruesome torture and death. Chevalier uses formal if base techniques like repetition, consonance and alliteration to draw us into his mind and works. The heavy alliteration reflects Darger’s use of collage – he couldn’t draw figures, so he traced figures of children from colouring books and reproduced them in different sizes at a pharmacy. The alliteration of ‘b’, ‘m’, ‘p’ and ‘t’ in a poem like ‘blown’ creates this replicating effect:

Here, ‘blown’ stands out from the collection as a poem acting more like a painting. It depicts a simple scene using heavy imagery, stylised with Darger’s techniques, and it departs from other, plot-focused pieces. The repetition in the last line– ‘flowers flowers flowers’ – too, emulates Darger’s cluttered floral landscapes. Repetition occurs again in ‘the bandage room’ with the refrains of ‘hail mary full of grace’, recollecting Darger’s obsessive attendance of mass. As in collage, Chevalier often collects images in a list, as pieces of Darger – his obsession with religion and grace, a life of hardship and crippling age, and his own identification as saviour:

In many of her list poems, Chevalier delights in a tumbling, rambling rhythm surrounding Henry, such as in ‘a used band-aid stuck to the august 13, 1955 saturday evening post’ (p.56):

At times, particularly in Part 1, Darger: his girls doesn’t take advantage of the experimental liberties particular to poetry when writing character in biography. The poems are occasionally too literal and read like exposition. In these earlier poems, Chevalier repeats biographical information that she has stated in the Introduction. Some pieces feel weighed down by this desire to impart exact biographical history, for example restating information in ‘punishing god’ (p.36):

While she may not deviate far from established Darger facts, Chevalier depicts him in a more sympathetic, innocuous light. His often scrambled and frantic thought processes, contrasted against a thorough and repetitive artistic practice, show him as a troubled-but-harmless neurotic. However, Chevalier does not allow us to think we know Darger for too long – one piece of Darger’s own writing – ‘an unusual child’ (p. 53-54) sits uncomfortably between poems about his artwork, and seems to allude for the first time a sexual attraction to children:

The passage reads like a peculiar dream sequence: there is little context and it is unclear who is speaking. Its effect is unsettling, casting doubt over what we believe, or want to believe, about the artist. This kind of uncertainty, though disturbing, complicates Darger’s character and reminds us again of biography’s limitations – the writer’s own imagining can only serve one of numerous truths about the ‘real’ Henry Darger.

This entry was posted in BOOK REVIEWS and tagged Henry Darger, Jessica Alice, Julie Chevalier. Bookmark the permalink.
Jessica Alice is a poet, critic and broadcaster from Melbourne living in Adelaide, South Australia. She is the Director of Writers SA, the peak organisation for writing and literature in the state. Jessica was formerly Poetry Editor of Scum Mag and Poetry & Short Prose Editor of The Lifted Brow. Her writing and reviews are published in The Guardian Australia, Metro Magazine, Overland, VICE, TLB, Cordite Poetry Review and Australian Poetry Journal, among others.