HNY 2012 to our contributors and readers 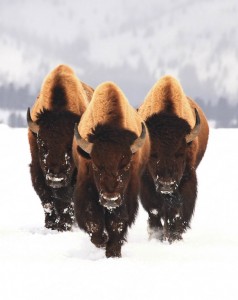 On behalf of the Cordite editorial team and the world’s bison population, I’d like to wish all of our contributors and readers a (belated, but) happy new year, and a glorious 2012! I hope that the new year brings you peace and prosperity and, just as importantly, creative inspiration.

While we’ve already done our run-down of the top posts of 2011, Cordite’s philosophy is not necessarily all about winning or being the best. Having now published over 1,000 poems on the Cordite site, not to mention oodles of feature content, reviews and other stuff, there’s always something new, or perhaps old, to read. That’s why we’re so proud of the two big issues – Cordite 35: Oz-Ko and Cordite 36: Electronica – that we published in 2011, and why we’re even more excited about our nifty random post feature. Go ahead, click away!

This year promises to be a huge one for Cordite, not least because thanks to the generosity of the Literature Board of the Australia Council for the Arts, we’ve been successful once again in securing funding for the publication of three issues of the magazine in 2012. So, all the more reason to head over to our submissions page and get your poetry submission on for Cordite 38: Sydney, due online in May!

Before we get to Sydney, however, in February we’ll be publishing our thirty-seventh issue – an issue without a theme. We look forward to presenting forty new poems selected by our guest poetry editor, Alan Wearne, as well as some special surprises. Until then, thanks once again for your support of Cordite, and here’s to a poetry-filled 2012!