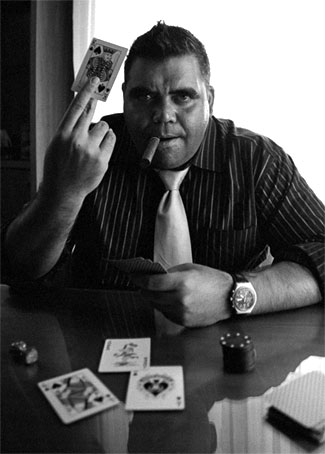 As with all themed issues of Cordite, we will accept up to five poems per submission. What’s the bigwig in the photograph telling you?

Maybe, at some point and in some way, you have hit the jackpot. Perhaps you’ve only lightly tapped it. Or not at all. Doesn’t matter, all poems relative to Jackpot! will be considered. Did the cassowary hit the genetic jackpot? Or is it the many genus of cephalopods that lucked out?

Jackpot: There are innumerable ways to become dressed up in the luck of its sartorial pizzazz. Drilling for meaning in applied Gestalt theory or geothermal vents in New Zealand, getting bumped into first class on a flight – striking a gusher of champers – instead of off it entirely, discovering a green grocer that has a cache of peaches otherworldly in taste … sometimes you just never know where a jackpot lurks. So forget about dinero and gamble with words. Or dress up as a springbok and gambol your way in a completely different direction. Take a chance.

It’s a fitting honour that Mr Watson is the guest editor for my first issue at Cordite as it was his book, Smoke Encrypted Whispers, which marked the advent of reading my first collection of an Australian poetry in Australia in 2004.

Samuel Wagan Watson is a Brisbane-based writer whose first collection of poetry won the 1999 David Unaipon Award for Emerging Indigenous writing. He has since picked up a list of other prizes, including the NSW Premier’s Book of the Year in 2005 and the Kenneth Slessor Poetry prize. His books Of Muse, Meandering and Midnight along with Smoke Encrypted Whispers are published by UQP.

Currently, Wagan Watson is the Senior Communications Officer for 98.9FM Brisbane Indigenous Media Association. His poetry made its debut at the 2011 Adelaide Cabaret Festival, adapted by the award-winning and multi-talented Indigenous songstress, Leah Flanagan.

Queenie Chan was born in Hong Kong in 1980, and migrated to Australia when she was six years old. In 2004, she began drawing a 3-volume mystery-horror series called The Dreaming for LA-based manga publisher TOKYOPOP. She has since collaborated on several single-volume graphic novels with best-selling author Dean Koontz. As prequels to his Odd Thomas series of novels, they are called In Odd We Trust and Odd Is On Our Side, the latter becoming #1 on the New York Times best-seller list the week it came out. The third book House of Odd is coming in 20th March, 2012. She currently lives in Sydney, Australia. Check it out.