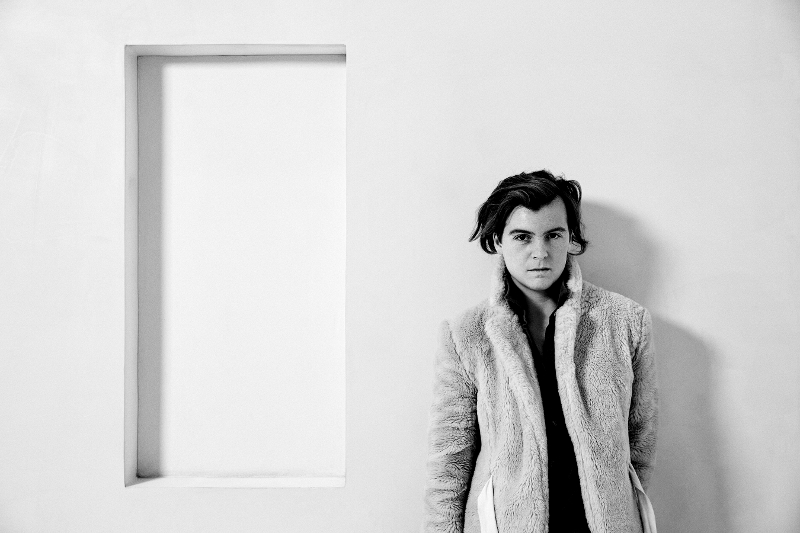 Read this interview in German

Okay, so now this: some years ago, a portion of my headspace was filled with sparse, glitchy MAX/MSP, droney type stuff. It still is. Was digging for more (Always more! Everything, all of the time!) AGF compositions (a moniker of the artist Antje-Greie Fuchs, worth looking up), found live sets she had posted online, one of which featured a German poet reading, reciting and conjuring live on stage over AGF’s maelstrom of micro clicks and cuts and swooshes.

And so it went that this poet was Ann Cotten. And so it goes with me – halfway across the world in Fremantle, spelunking into the ether – sourcing whatever of hers I can find. There’s a recording floating around somewhere of her reading ‘33 Extension, Ecstacy’ (‘33 Extension, Ekstase’) published at Hilda Magazine, co-translated by Cotton and Rosemarie Waldrop, which begins with:

Check Cotten’s bio below for background and context. There are plenty of interviews you can check out elsewhere and elsetime – pinpointing lineage between the fact that she’s an Ames, Iowa born (mere kilometres away from Kent MacCarter’s birthplace of Lakeville, Minnesota, as well as the farms of my own forebears pre-California migration, no less), Vienna, Austria raised and educated poet, currently based in Berlin. Search and you’ll also find absurd articles written about her by absurdists. (Read between the lines of her answers, within the pixels of the glow emanating from your screen.) Listen to her recordings, inhale the poems – many have been translated to English online. If you read German, read everything she’s written about concrete poetry. Gather what you may.

Ann Cotten is the real deal. This is the conversation I had with her.

Aside: The conversation was conducted in German until a question was lost in translation. The second half of the conversation thereafter was in English.

Jeremy Balius: When I was still living in Prenzlauer Berg in 2003, I was amazed by the general openness between poets, artists, authors, DJs and musicians there. I hadn’t seen such widespread collaboration before Berlin … where it almost felt like collaboration was the goal. With collaboration everywhere, does it have a level of importance for you and your poetry?

Ann Cotten: No, I can’t stand collaboration. But I am interested in other people. I just won’t work with them in an artistic manner.

And yet, I do benefit from this atmosphere – it’s easier to speak to strangers. There are a lot of possibilities, beautiful and weird young people gather together. It’s successful as well as the opposite of success.

On the other hand, there are other cities with kindred atmosphere. I found that in Naples, the Neapolitans speak with each other like trusted colleagues. It was much better there than in Berlin. Here in Berlin, the successful people keep their careers front of mind and those without success just complain.

Perhaps the openness in Berlin means that one must defend one’s self against collaboration, rather than be thankful for it. One can lose one’s self into false courtesy and moronic celebration of creativity, which makes collaborators idiotic at times.

Do you like working with others? Does it work well for you to be friendly all of the time or do you sometimes use bad moods to better the quality of your output?

JB: Regarding careers and complaining, that’s probably true the world over! It depends with me – usually not, other than when making music with others. Where poetic collaboration has been successful for me was with concrete and visual type stuff, but that’s not really working with each other, but rather on each other.

Defending one’s self is an important theme for me and I question it in my own work, for example in the space of social responsibility, or spiritual expectations, or against truths and untruths one has been or is taught. Other than defending yourself against ‘scene’, are there things in your life you need to defend yourself against in order to be able to formulate the thoughts which eventually become your poems? Are there barriers to your writing you need to overcome?

AC: All types of responsibility I enjoy being faithfully against, but I’m not sure if it is more dangerous to shun responsibility or to decide to respect it, making the mature turn that kills the spirit of so many motorcyclists every year. In poetry, that would mean that my well-meaning attempts at being more comprehensible, i.e. in some cases more conventional or simple, might lead me onto well-trodden paths I really don’t want to take.

I want to think well, but is thinking well thinking most realistically, or thinking realistically with a bit of an utopian turn? Feminism and other sciences of the unreal show it clearly: If I ‘realistically’ see myself as others see me, their view will never be disproved. A certain ignorance of the worse views on women totally frees me of them (until, of course, I meet one in a dark alley – but I might be able to meet it dark for dark …)

Pages: 1 2
This entry was posted in INTERVIEWS and tagged Ann Cotten, Jeremy Balius. Bookmark the permalink.
Jeremy Balius is an artist and writer living in Fremantle WA. A chapbook of artwork in the This is Visual Poetry series was published in Florida USA in 2012. His art was recently included in The Dark Would: anthology of language art (Apple Pie Editions, UK; 2013). Balius' recent poetry publications include wherein? he asks of memory (Knives Forks and Spoons Press, UK; 2012) and the free-to-download, English/German bilingual chapbook halation assembly kit/der lichthof bausatz (co-translated with Marcus Roloff, self-published; 2012). Through the assistance of residencies at the Katherine Susannah Prichard Writers Centre and the Fellowship of Australian Writers (WA), Jeremy has been writing a debut novel about German immigration to Australia. He looks after Black Rider Press and sings in Oh White Mare. You can see more of his work on Instagram: @blkrdr

Ann Cotten, born 1982 in Iowa (USA), grew up in Vienna, Austria, where she studied German Literature. In 2006 she moved to Berlin. Her first book of poems consisted of 78 double-sonnets, creating a surprise effect in the German poetry scene. Since, she has published her diploma thesis on concrete poetry (Nach der Welt, Klever Verlag 2008), a second book of poetry and prose ostensibly written by a palette of characters (Florida-Rooms, Suhrkamp 2010), a 1-Euro elegy (Das Pferd, SuKultur 2007), a part of a bibliophile "Schock" edition (Pflock in der Landschaft, 2011) and a book in English; I, Coleoptile (Broken Dimanche Press, 2011). With Monika Rinck and Sabine Scho, she performs the "Rotten Kinck Schow", a wild theory and paper-mache thing, irregularly.