the indeterminateness of anxiety 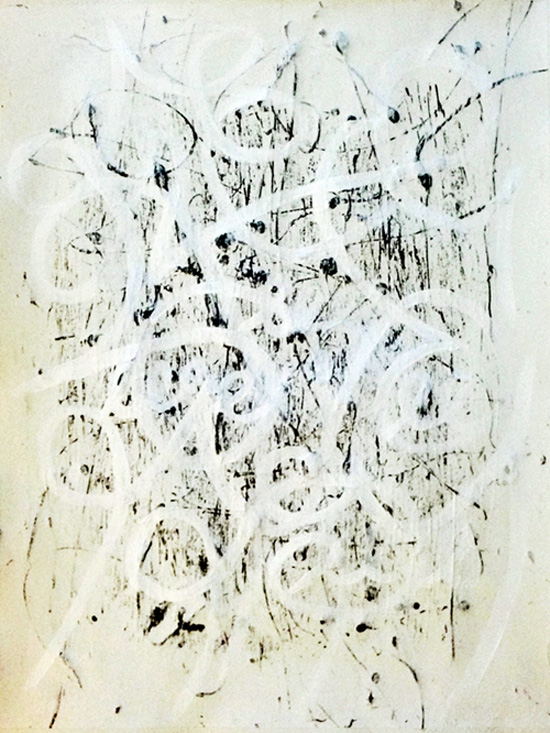 I’m interested in language as a material of making, particularly in states of formation and cessation. I’ve been working at the crossroads of calligraphy, pre-Renaissance German handwriting and graffiti, while referencing a cursive mode of writing I was taught in school while growing up in Germany.

Cursive writing wasn’t allowed once I went to high school in California, and then came digital writing – I hadn’t used cursive to write with since childhood. Interestingly, after all these years, I can still see traces of it in my signature.

I’ve found that handwriting is infused with and expresses intention (motivation), emotion (joy, stress), temporality (haste), cultural context and personality in ways which are different to typography or architecture of letterforms. I’m particularly fascinated by how handwritten messages age and fade and are overlaid by new symbols, new voices – layers of messages filled with memories and ideas merging to become something altogether different, and then decaying together over time.

This entry was posted in ARTWORKS and tagged Jeremy Balius. Bookmark the permalink.
Jeremy Balius is an artist and writer living in Fremantle WA. A chapbook of artwork in the This is Visual Poetry series was published in Florida USA in 2012. His art was recently included in The Dark Would: anthology of language art (Apple Pie Editions, UK; 2013). Balius' recent poetry publications include wherein? he asks of memory (Knives Forks and Spoons Press, UK; 2012) and the free-to-download, English/German bilingual chapbook halation assembly kit/der lichthof bausatz (co-translated with Marcus Roloff, self-published; 2012). Through the assistance of residencies at the Katherine Susannah Prichard Writers Centre and the Fellowship of Australian Writers (WA), Jeremy has been writing a debut novel about German immigration to Australia. He looks after Black Rider Press and sings in Oh White Mare. You can see more of his work on Instagram: @blkrdr