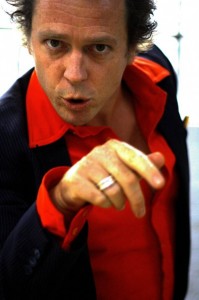 He ranted and raved. He was fabulous. Ranted and raved and spat and shouted for 20 minutes and grew and grew until he was Alice in Wonderland after she drank the bottle (add a little bit of stubble) and he was holding the audience crouched in his palm. He was Tug Dumbly. 'Hi I'm Tug Dumbly' he said when we met, 'and I'm a performance poet.' He leant back and cradled his beer in the convex curve of his stomach.

And I thought, as I was watching him on the stage, what is this performance poetry? Words like 'reasonable rent increase' or 'banana and cheese sandwiches.' Words that if this universe made any sense, should never be jammed together on a page, or in someone's mouth. Doesn't a writer write because he can't speak his mind? What kind of self-respecting word artisan dares to read his poetry out aloud? To other people, and enjoy it? At best shouldn't a writer stutter through his work at a polite reading held at local bookshop, murder every well written phrase and remind us of the place of actors in this world?

And then there was the book. What kind of book records in words what others wrote and then transformed into performance. It was called Performing the Unnameable. An anthology of Australian performance texts. It was sitting in the convex curve of my lap.

So here we were, me and Tug. Tug and me. In the backyard of his house, looked over by four wanton-looking Barbie dolls perched salubriously on the rotting timber of a garden shed. There were beers. Old plants. Cups of tea, and a tape recorder. Tug took a swig from the vb bottle. He was nicely framed in among the cactus. I wish I'd brought a camera. Still a thousand words, and I'll get a picture. An aeroplane drowned us momentarily and as we surfaced for air I threw him the first of my intense, probing questions…

So, er is Tug Dumbly your real name?

No actually I gave it to myself. I was looking for stage names for a band I was in and I read over an old review of Clannad I'd done – I used to write reviews and interviews and stuff. It had a line in it, I was trying to describe the way this beautiful wispy Irish music affected me, and it said 'about the ghosts that tug dumbly.' It meant trying to describe the music that pulled at your heartstrings. Those words, 'tug dumbly' jumped out, I don't know why. So the name actually has quite a beautiful poetic genesis despite its rather smutty connotations.

And how did you start doing performance poetry?

Well I guess I am a failed rock star. I played in bands since high schools, growing up in Nowra I always wanted to be a rockstar. After my HSC I moved to Sydney with my band, put a couple of records out and then when that fell by the wayside I had another band Jungle Book, and then formed Celestial Panelvan. This one is still going, but its almost cabaret, very different from the straight pop bands I'd been in before. And somewhere along the way, while that band was going, I discovered a little performance night at a place called Elli's pizza caf?¬© just up on Tailor's Square on Tuesday nights. At the back of Elli's there was a little curtained off space, a stage which consisted of a couple of milk crates, a couple of speakers, and I went along one night to check it out and there were people getting up and performing poetry and I hadn't seen that before. It had the beauty, the simplicity of being able to do it yourself. You didn't need a band. So I came back the next week and I had converted a couple of my songs to dramatise them, and I started getting up and performing them. I loved it, the immediate feedback, the adrenalin, the fear, you had no band to hide behind. Then I met Phil Free, he's a bit of a Sydney institution, and I found performance venues like Brackets and Jam, discovered the Walls have Ears, and then started up a performance night at the Hopetoun Hotel, and it went from there.

And so what is the difference between singing and speaking something?

I think song lyrics can be more impressionistic, you can suggest more, can cover it with the melody. Maybe with performance poetry you have to be more direct. There is more weight on the actual words because it has to stand on its own. They can be quite different mediums but both beautiful in their own way. I think the best people can stand across both genres, brilliant lyrics and brilliant music, like Tom Waits.

What do you think is the difference between reading your texts and seeing you perform?

I don't really know. I often worry how the stuff would stand on its own being published without being delivered by me because I know the fine intricacies and rhythms that I want, and no matter how you lay it out you're never going to totally nail that. Its very hard for me to be objective about how people are going to perceive my stuff on the page.

So you're saying there might be emotions or nuances that you vest into it in your performances that wouldn't make it to the page.

Yeah, I mean a lot of my stuff, it's satire, I'm a satirist basically and I do a lot of characters in my performance, they are quite physical, quite theatrical. If people have seen me, they've seen the piece performed, they have some reference, they can say oh that's what he does there and here and here. I think my stuff will stand ok on the page but it won't be the same. Ideally the medium for a lot of my stuff will be cd or video so people get the whole package.

I find this book a little challenging. It seems to me like some kind of labyrinth, if you read the text, the performers notes, and the biographies and reviews you end up with some vague idea of what the actual performance was like. It's almost like reading a code.

Yeah, I see what you mean (thumbing through the book)

Now I was going to ask you how you would describe your work, you touched on it before but perhaps we could talk about it again.

Counter-cultural sabotage, perhaps it's satire, somewhere between standup comedy and poetry. A real larrikin element to it, and a fairly Australian Voice I'd have to say.

How would you describe the performance poetry scene? What do you think of its future?

But that's kind of the beauty of it isn't it?

Yeah in a way. There is an audience for it, probably an expanding audience but it is never going to be packing out the rsl's or anything. A lot of the people that come down to the evenings are performers or want to be performers and so it is really gratifying to actually come back a week later and see them get up with something they have written. At its worst performance poetry is like a therapy group and there is certainly a lot of crap out there, but if you sift hard enough you'll find some truly inspired and moving performances. And I think anything that encourages people to get up and express themselves, which this does, is a good thing.

Now the scene – if people want to come and see you and they want to know what is going on in terms of performance poetry, where you do perform and what other venues are there.

There's the friend in hand Tuesday Nights at 9pm in Glebe Thursdays – there's Hotel Hollywood (2 Foster St Surry Hills) which is a singer, songwriter performance come poetry night starting 9/9.30pm. The Brett Whitely Gallery in Surry Hills has monthly readings run by the poets union. The Last Wednesday of every month at the Don Banks Museum on the North Shore there's the Live Poets Society. And you can catch me on 2ser, 2bl, and Triple J.

So what do you think would be the medium you would best use to capture your work?

Well, there's a lot of things I want to do, certainly I want to put a book out, but its more a case of knowing what to put in because I've got so much stuff. And I guess what I'd ideally like to do is a cd, and a lot of that stuff would be live, record some gigs and that way you get the real interaction, feeding off the audience and vice versa, which would bring it to life the best.

… vroooooooom. The onomatopoeia of an aeroplane. It was the closing sound of our little chat. In the roar that surrounded us I'm sure one of the Barbie dolls said something funny. A chiwawa with a jumper ran around our feet but that's another story. I stood up, held Performing the Unnameablein one hand, shook Tug's hand with the other. Made polite movements towards taking my teacup into the kitchen but left it perched on the garden chair. Tug was different in person I'd have to say. He didn't have that mic in his hand. He wasn't standing on an elevated platform across a room jam packed with lots of people. He spoke more quietly. But then, I mused, as I picked my way down the corridor, what can you ever really know of a man. Or a book for that matter. If you want to catch the lovely Tug Dumbly in person check him out at the Friend in Hand on Tuesday nights or Thursdays at the Hotel Hollywood. And for a great archive of performance material – Performing the Unnameable – an anthology of Australian performance texts, edited by Richard James Allen and Karen Pearlman.