Straight from the Tank

On January 25, 2003 – the hottest Melbourne day since 1939 – David McLauchlan and Michael Ward began the practice of filming poetry readings for the Channel 31 TV program “Red Lobster”. As of late 2006, this process continues, and over 150 episodes have gone to air. STRAIGHT FROM THE TANK is a two-hour DVD of selections from the first two years of recordings, with over 60 different pieces recorded at 17 different venues, and featuring readings by well-known poets such as Dorothy Porter, Eric Beach, and Les Murray. 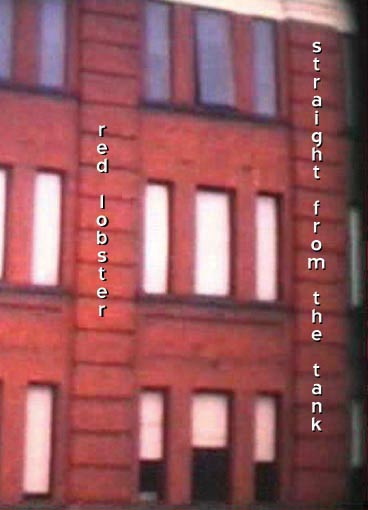 In selecting the poetry pieces (as 'off-line editor') for the DVD, and in considering the running order, I hope to have a created a continuous 'show' which, if one is in a particularly generous and attentive mood, one can watch from start to finish without too much restlessness. The styles on view range from classic 'lyric' poetry to pseudodada wordplay to jazzy Beat-stylings to quasi-Biblical philosophising to hip-hop-influenced word-flow. There's even a 'Bush Poetry'-type poem, haiku and senryu, and a piece that can only be termed Ironic Nouveau-Surrealist Post-Modern Pop Culture Mime Critique.

With three or four notable exceptions, all pieces are less than three minutes, and most around one-to-one-and-a-half minutes. Again, almost without exception, I chose quality performances ahead of quality poems performed adequately. After all, we are looking and hearing, not reading, and I wanted this film to be a record of a particular time in Melbourne when fine performances seem to have been in unusually large abundance.

(It should be noted that not all of those in the film live in Victoria: Brook Emery, Eytan Messiah, and Les Murray are based in New South Wales, Kerryn Tredrea in South Australia, and Robert Priest in Toronto, Canada. Of course there were also many fine performers who couldn't be included simply because there was no available footage of them.)

At any rate, something of the quality and great variety of the recent 'Performance Poetry' or 'Spoken Word' scene in Melbourne is clearly apparent. These terms are, of course, problematic in that a great deal of the work that appears in the film has been written with the page rather than the stage primarily in mind. However, exceptions to this would almost certainly include pieces by Edward Burger, Eddie Dalton, Sjaak de Jong, Tom Joyce, Shelton Lea, Gemma King, Grant McCracken, Wayne Meredith, Danielle Peebles, David Prater, Michael Reynolds, Esteban David dos Santos, Michael Ward, and Lauren Williams.

While there is undeniably a difference in intent here – and this is an old and perhaps rather tired argument which nevertheless continues in Melbourne and elsewhere – it brings to life (again) the belief that there is a distinction between the two art-forms, even if only taking into account the two most extreme poles. While a number of the artists mentioned above would reject the terms 'Performance Poetry' and 'Spoken Word', they would nevertheless admit that some of their own work is created to be heard live rather than seen on paper.

At the other end of the scale are those who write first for the page, and then present their poems to audiences as an afterthought – causing such responses as that of Martin Langford (Director of the Australian Poetry Festival, 2001): “There are still good poets around who do not read well.” (“What Audience? Which Festival?”, Cordite #8) Hopefully, not too many of these poets are in STRAIGHT FROM THE TANK.

Having said this, it has to be stated that in watching over one hundred hours of footage in order to compile this film, the general standard of performance of most poets – even those who perform in front of audiences quite often – is actually quite low. Many readers have clearly not bothered to practice their pieces aloud before hand, and often stumble over the simplest of phrases. This can be put down to the simple fact that most people are not naturally comfortable performing in public, but all would benefit greatly through the practice of a few spoken run-throughs on the day of the reading, or even just before taking the stage.

A great deal of poets read their writing as if it contains nothing but simple statement of fact: there is no attempt at semantic emphasis or suggestiveness in meaning, no emotional expression, and seemingly no relevance to the life of the human being pronouncing the words. The inherent introversion of poets, so it would seem, leads them to betray the intensity of need (and love of their craft) which gives rise to the creation of their works in the first place. Those who hear them read their poems often are left feeling not much more than a sort of polite respect for that which they sense should be respected. Perhaps more often than that what a large majority of the audience experiences is plain indifference.

Naturally enough, this raises the issue of the value of 'open mike' sessions (at which anyone can recite their writing) as a part of poetry readings, and whether or not there should be some attempt at restricting the actual number of regular public readings, as some have suggested should happen. A frequent viewing of the weekly 'Red Lobster' show (which takes a sizeable amount of its content from open sessions) will reveal that the standard of 'open mike' poetry is variable, to say the least.

Such opportunities for public performance and broadcast, however, allow poets to air their work in front of reasonably like-minded folk who may supply valuable critique (often only if asked for, as Melbourne audiences tend to be remarkably polite). One can 'see how it sounds' in the act of performing the work, and even more so when viewing oneself on television – an undeniably confronting experience and an invaluable tool for self-critique.

While these arguments (among others) are undoubtedly strong ones for supporting the proliferation of 'open mike' readings – and it seems somewhat undemocratic to try to limit the intrinsically organic nature of even loosely organised artistic events – it has to be recognised that many non-poets who attend such readings will never return to another. The haphazard quality and amateurish presentation at some open readings, where the spoken word competes with loud and relentless commercial transaction or everyday conversation is merely one of the factors that contribute to the general lessening of respect for poetry, but it is one that can be reasonably easily avoided.

At the same time, however, there are (at a quick glance) at least two readers in STRAIGHT FROM THE TANK who I have only ever seen before (both at open mike sessions), but whose performances have struck me as good enough to be included ahead of many other better-known readers. Many times in the last ten years, too, I've been present at such readings and been astonished at the consistency in quality and range of genuinely unique performers I've been witness to.

Still, what many experienced readers and 'performance poets' realise is that the audience wants work which is engaging at first hearing, but also that this does not necessarily mean the work needs to be lacking in poetic quality or depth. Rather, if a poem is well performed it can evoke resonances, which may not be apparent on the page.

A good performer reaches out to the audience first, if not to shake their hands, then at least to drag them closer in, and so to be able to whisper in their ears or slap them in the face. A poor performer (especially of poetry, that most idiosyncratic and intimate form of wordplay) acts as if those privileged enough to be hearing the poem should collectively be on their knees, paying the closest possible attention to each hollow-sounding phrase, thereby only succeeding in thrusting the audience away like an unsatisfactory lover.

The best performers of poetry inhabit their language as they speak it, much like fine method actors; they feel the meaning(s) of what they have written; they are inside their words as they project them into the world, imbuing their texts with a soulfulness and individuality found in all the greatest musical performances.

Above all, what I hope for the STRAIGHT FROM THE TANK DVD is that it will create for performers of poetry of every level and frequency the possibility of imagining new ways to bring their words audiences. Many of the artists in the film are startling in their uniqueness; there is no one who does what they do, or could do what they do. Each of them has their own way of attempting to connect to those who hear and see them, and while not every performer can connect with every audience member, I hope that everyone who sees this film will discover more than one performer they find themselves drawn to, and hopefully seek out more of that poet, and of course more poetry.

STRAIGHT FROM THE TANK

'Red Lobster' is a Northern Access Television Program on Melbourne Community Television on Channel 31. The program goes to air at 11pm every Thursday, as well as now as now being available as streaming media files on the continually updated ?Red Lobster' web-site.

This entry was posted in GUNCOTTON and tagged Matt Hetherington, performance, Red Lobster, spoken word, Television. Bookmark the permalink.
Matt Hetherington is a writer, music-maker, and moderate self-promoter living in Brisbane. He has been writing poetry for over 30 years, and has published 4 poetry collections and over 300 poems. His first all-haiku/senryu collection For Instance was published in March 2015 by Mulla Mulla Press.