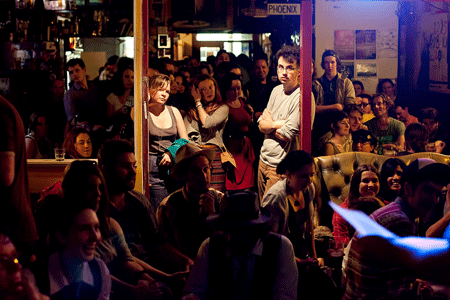 I lived in Canberra for five years. It rocked. But it is very true that Canberra’s literary credentials do not make themselves readily known to casual visitors. Used in the short, Canberra is more commonly code for a kind of politicking: bureaucracy, tax, meetings, money, rah rah rah; Abbott, Gillard, et cetera. Yet as many residents will tell you, there exists sleeper cells of activity dispersed in backyards, small hidden venues and local park halls throughout the inner suburbs and beyond. Smiths Alternative Bookstore, Gorman House, The Phoenix, The Front. These are your passwords.

The second You Are Here festival, held over ten days in March, sought to ‘showcase the best of Canberra’s diverse independent and experimental arts and culture’. I hope they don’t mind the comparison, but You Are Here is sorta like TiNA, utilising traditional and non-traditional city spaces as a testing ground for all manner of wild pursuits.

This year, these wild pursuits included four poetry events, all of which accommodated jam-packed crowds. Poetry is pretty well represented in Canberra, from Geoff Page’s longstanding Poetry at The Gods reading series, to regular slams and open mikes, and small creative journals such as the now-defunct Blast and Block (cough…I was one of the editors of the latter for a while) and newcomer Burley.

During my years there, the Traverse poetry slam held at The Front in Lyneham, was the epicentre of my social and creative life. It is not too OTT to say that I’ve never experienced a stronger or more vibrant creative community. Although technically a slam, this event was always a lot more diverse than that, and became a place where print-outs and pamphlets were exchanged and dangerous ideas debated well into the am hours. With bitter-sweet timing, this slam’s founder and organiser for the past six years, Julian Fleetwood, announced just last week that he is putting the mike down to rest.

So, You Are Here. I didn’t make it to the festival this year, but for this blog I’ve invited three people involved to give their take on the poetry events that happened over the ten days. David Finnigan, playwright, performer and festival co-producer; Andrew Galan, co-founder of the BAD!SLAM!NO!BISCUIT! poetry slams and accomplished poet; and Miranda Lello, a formidable poet who represented the ACT in last year’s Australian Poetry Slam final. All photos are by Adam Thomas, YAH’s official photographer, reproduced under a Creative Commons license. You can view more of Adam’s work. 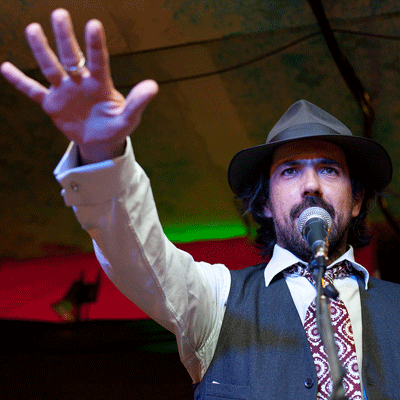 [David] The Tragic Troubadours presented poetry in the Civic Interchange at peak hour (8-9am and 5.30–6.30pm) over four days. I came along to the first iteration to keep an eyeball on it – the risk management part of my brain was envisioning sleepy white collar peeps being harangued by frothing poets on soapboxes – but the reality was actually really lovely. I approached the quartet of poets and pretended to be a real person. They offered me a choice of four poems and I chose the one about a late night cup of tea. 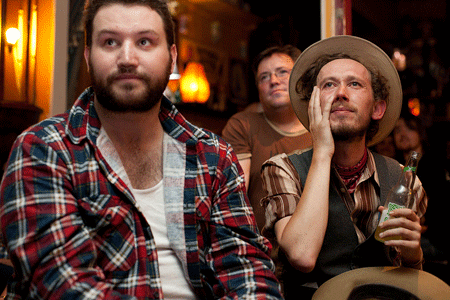 Tragic Troubador Bela Farkas and You Are Here co-producer Adam Hadley at B!S!N!B!

[Andrew] Through The Tragic Troubadours the You Are Here Festival walked out of venues and into Civic to offer itself to anyone willing to take the chance of saying yes to the surprising offer of a poem with no strings attached.

[Andrew]People who turn up for Bad!Slam!No!Biscuit! know they can be involved, people there by accident come back, and we are seeing great poets emerge from this, as well as seeing more and more people who will listen to the poems and then be vocal in their opinions of the pieces. 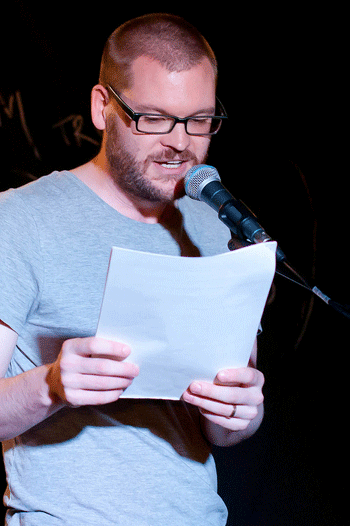 [David]The Even More Secreter Gig at the festival hub on Monday 12th was a festival highlight for me, partly because it was the exact opposite of that. 50–60 people crashed out on couches listening to four poets read their work. It was mellow and for me, at least, when you’re crashed out somewhere comfortable, your mind is free to go wandering.

[Miranda] Sitting on an armchair in an abandoned newsagent I’m fairly sure not everyone can see me reading my poem. But I figure that no one cares too much. I read an old poem about sex and Charles Bukowski. Everyone’s listening, but it’s hard to tell whether they’re on board the poetry train or not. 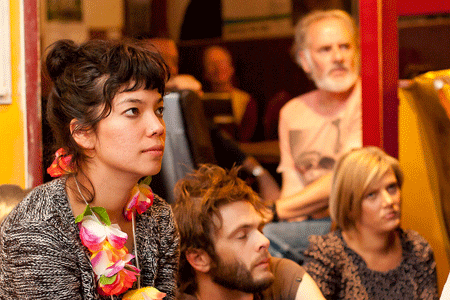 [Miranda] Someone circulated a flyer saying We are everywhere urging us to turn the artistic content of the festival into a generalised feature of existence in Canberra. Can we have poetry in the sunshine, in empty buildings, without a ‘festival’? I think about that leaving the newsagent, having told none of my friends from work I was performing – why does poetry always live in boxes, in particular spaces. Can we bring it into our lives? Can You Are Here be a model for different kinds of creation in all the spaces of Canberra?

Emily Stewart lives and works on Wangal land. She is the author of Knocks (Vagabond Press, 2016) and her forthcoming collection, Running Time, received the 2021 Helen Anne Bell Award for an unpublished manuscript. Emily was formerly the poetry editor at Giramondo Publishing and she is currently completing a creative doctorate at the Writing and Society Research Centre.

View all posts by Emily Stewart on Cordite →