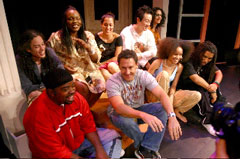 Considering Melbourne has, arguably, the most active and vibrant spoken word and hip-hop scene in Australia, it's a real pity that this show didn't come further down south. I attend quite a few readings and spoken word events in Melbourne and I wanted to see if there was anything I could learn from the Def Poetry Jam, a Tony Award-winning stage production that grew out of a television show created by Def Jam co-founder, Russell Simmons. But for the most part, I just wanted to be entertained.

And you know, there wasn't a single feeling I had at the Def Poetry Jam that was any bigger than those I've had at readings around Melbourne. But I am desperate for more readings that make me cringe not because I can't properly hear the mumbling drunk poet on stage but because s/he just flicked my right ventricle with a high altitude speculum. I want to hear more writers who are writing because they have something that needs saying and they are desperate to find the best way of saying it. Desperate. Not just a bit bored with too much time on their hands and a kilo of grass and a half-chewed novel in their bottom drawer.

So that was where my head was. That's why I went to the Def Poetry Jam. Now, if you've heard of Def Jam it's probably because they are the hip-hop label responsible for Run-DMC and LL Cool J. I was reminded of this when DJ Jedi kicked off the night by flouncing onto the stage and hitting the decks, mixing up some old school hip-hop with 70's soul. At first I worried about the hearing of the older members of the audience but as Jedi eased into the show, the 500-strong and mostly white crowd began to relax. It was like being in a nightclub with your parents, only much cooler.

Then came the hip-hop poets of the night – Staceyann Chin, Beau Sia, Mayda Del Valle, Flaco Navajo, Georgia Me, Suheir Hammad and Poetri. Check out the names on them. Some were funny and some were very personal, some were so raw that I was searching for the right face to wear; they all resonated with anger and disenchantment. But it surfaced in such different ways that I was held on the edge of my seat.

They jammed about topics ranging from cultural and gender stereotypes, 'nigods' (that is, sexy black men) and sexual pigeonholing, to domestic violence, money, terminal singledom, cooking and childhood innocence. There was so much rage and a fair bit of comedy, and by the end of the night my gut had seen a fair walloping. I felt discomfort, and joy, and I remembered why we do this thing – why and how communication can remind us that we're not alone.

With one insignificant exception none of the performers forgot their lines, and none of them used written notes. So it felt like a real stage show. There was no improvisation, however, which had me marginally disappointed. I have come to love improv through being spoilt by the talents of Melbourne acts like TZU. But, like the guys from TZU, there was passion in their mouths, in their eyes, and in the way that they moved about the stage.

Not everyone who writes can read or perform. The Def Jam poet-writer-performers rapped and sang and spoke on their own, in pairs, in threesomes, and altogether. They were generous with each other and with their audience; they listened to and looked at each other, they nodded and smiled and snarled and lived on stage for a couple of hours that passed too quickly.

And in the middle of it all, I was struck by how weird the world can be. Sitting in the second row as an Anglo-Australian who grew up with Kentucky Fried Chicken, West Side Story, Nike and the Jacksons, Punky Brewster, the Dukes of Hazzard, Family Ties and Diff'rent Strokes, as well as Seinfeld, Roseanne and Oprah, and now Starbucks and 7-11, I think I know America; I think I know Americans. They are those stupid people who don't know anything about what's going on outside of the US, right?

I love being proven wrong. I live for the heart-lifting surprise of how clever and how succinct and how apt and how funny-cool and butt-silly other people can be. It's not that I forget what it's like living as a black American woman – it's that I've never known. But I was given the chance to look inside the stereotypes (getting beaten in the Bronx, on welfare, as a boyish Jamaican lesbian) and forced through eye-needles to imagine what it would be like to be born and brought up in a place where, as an adult, in my own neighbourhood, I still get appreciative remarks about how good my English is.

The Def Jammers were gutsy and feisty and touching and soft, and they were unrelenting. All sensitive power and soul. It hurt. Sure, they may take their writing seriously, but they never forgot how important it was to entertain their audience. Even when I didn't want to care, I was forced to. There are real people behind those stereotypes.

Watching this show made me think about how we present our poetry readings and spoken word events here in Australia. We embrace apathy, don't we? … Yeah, whatever.

We have some of the best writers in the world here. And we have so much to say that needs saying. We're good at encouraging each other to get the hell up there and try it. What we're not so good at is getting up there again after someone who loves us has said Yeah, that was good – but you can be so much better.

It's because we want to be entertained that we as audiences are so soft and gentle on our writers. We are on your side because we are you so of course we'll help you get better if you let us. But please don't leave me bored-dumb-stupid-crazy. Instead make me grind and howl, make me scream, get me mad, watch tears roll down my face, make me remember, teach me and calm me, and in the same moment make me reckless – because if you bore me, I'll drink, but if you poke me where I can feel it, I promise I'll sit up and listen.

Louise Swinn is one of the founding partners of Sleepers, a Collingwood-based company dedicated to the advocacy of new and established writers and their writing.