When I arrive in a new territory, I sniff it out, find spots that I like and leave my own scent, which is what I did when I came to Cardiff. Cardiff's likeable in many ways: friendly peeps, a public transport system that actually works and enough stationery and book shops to keep a writer happy. But in one essential part, Cardiff has failed me.

I sought it here, I sought it there, I sought it everywhere. It is a sad, but true fact. There are no visible Internet cafes in Cardiff. So when I finally discovered a few terminals at Maccas in the Queen Street mall area, it was a dubious turn of events. The keyboard is a silver-plated concoction embedded into the table, and the keys get stuck, man, and it takes twice as long to type a sentence, and you can see the little timer ticking down, and you want to just bash in that touch screen because it's just taken your last quid! If you can hold your breath for long enough to keep from inhaling the smell of refried animal fat cooking burgers ad nauseum, one quid gets you half an hour, two get you one hour. Yikes! Other people breathing their chewed-food smell on you while sitting at a terminal and using it as their dining table is another form of exquisite torture. 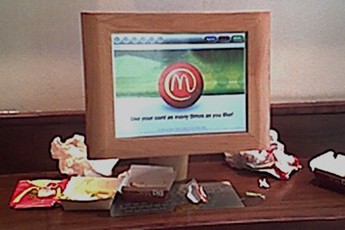 I usually prefer to go the frugal route, if I can. So, of course, I head to the library. To register, I need two documents with my current address and photo ID. Bear in mind, I'd just moved, and my correspondence was nil. [A word of advice for whenever you move someplace as bureaucratic as the UK: tell your friends to write to you, and don't forget, re-route official correspondence to your new place, because you are going to need all the ammunition you can get to prove you exist.]

After all the requisite paper pushing, I was a member. Free Internet! Yes! But there were limits. At my local library, I have to book for the 30-minute slots. 30 minutes is not enough for this little cybernaut. And then I find I can't access my webmail, that I need to re-route my mail through to my Yahoo mail account. I can't even use the USB ports to upload poems and other documents. And, to add insult to salted wounds, for a little while there, the library system deemed Blogger as Chat (which is Bad. Chat is Bad. Say it with me…). I couldn't blog! It was like they'd blocked an artery.

I was so pathetically hungry for scraps, I genuinely thought it was cause for elation when I overheard a guy at the central library (bigger, brighter, et cetera) ask for a booking for two hours. Manna from heaven!

As I wandered the lightly littered streets of Cardiff, I wondered, where have all the Internet cafes gone? This is no way to live, this truncated techno-lifestyle. Luckily, my aimless wandering bore fruit when I discovered a proliferation of South East Asian shops selling foodstuffs and the like, down Tudor Street. At the very end, near where it meets up with Clare Street, there it appeared, one of those Talk & Surf shops that sell you phone-time so that you can call your loved ones from inside a smelly little booth, sitting on a seat that might've popped out of the chest in Alien, it was so uncomfortable. I'd found it! Most importantly, it also sold Internet time (like Hammer Time, only better).

For three weeks, I oscillated between Maccas, big library and little library, as if I were under child custody — two hours snatched here, another half hour from there.

Until, dear friend, the day my nomadic existence ended, and that was the day I came home and there was broadband, wireless internet and a large chocolate bunny. But that's another story, to be told another time.

This entry was posted in FEATURES and tagged Cardiff, Internet, Ivy Alvarez. Bookmark the permalink.
Ivy Alvarez is the author of The Everyday English Dictionary (London: Paekakariki Press, 2016), Hollywood Starlet (Chicago: dancing girl press), Disturbance (Wales: Seren, 2013) and Mortal. A three-time Pushcart Prize nominee, her work appears in many publications, including Best Australian Poems (2009 and 2013), with several poems translated into Russian, Spanish, Japanese and Korean. Born in Manila and raised in Tasmania, she lived many years in Wales before moving to New Zealand in 2014.