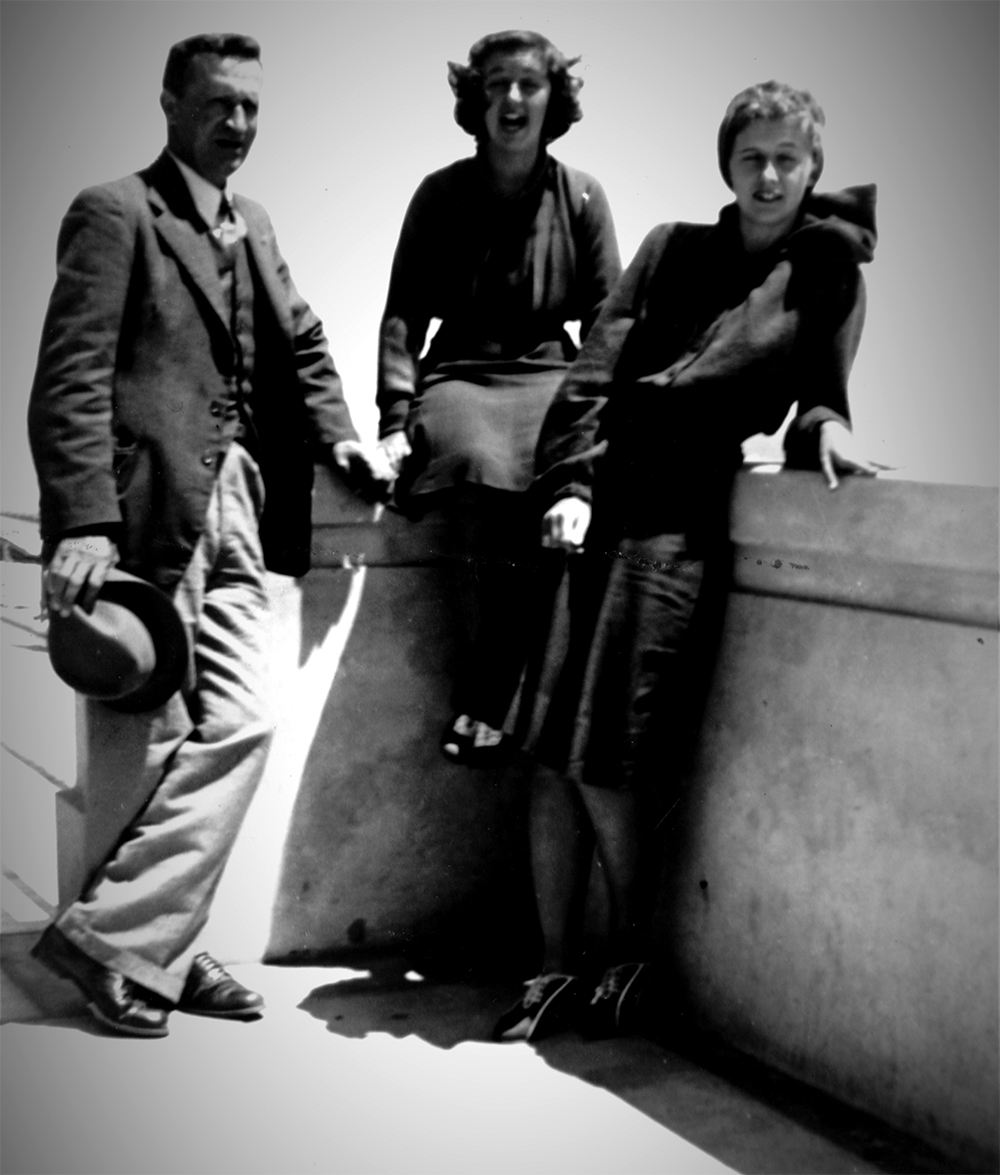 Like any close human relationship, there are ambiguities and complexities in sisterly bonds. There is also, I think, a spooking inherent in the proximity (so close, me and yet not me) of sisterly connection. It is here that I need to declare that my mother, Lesley Dougan, is the sister, the endlessly staunch and patient collaborating partner and enabler of Hewett’s juvenilia (as well as some of her mature work); and her closest companion in those early years at Lambton Downs, and more, a close companion through all their years. Dark and fair, a duality that Hewett would play on in the imagery of her creative work, sensible and wild, a doctor and a poet, they have both written about the earliest staging of their lives. In the poem ‘The Valley of the Giants’ Hewett writes:

In her essay ‘My Sister, Dorothy Hewett’, Lesley Dougan catalogues their early farm life. What emerges is their strength of sisterly and creative bonds, my mother’s sure and early knowledge that her sister is someone to be aided and encouraged, and to be strengthened in her needs as a young artist. The force of Dorothy’s will, their shared love and connection to Lambton Downs, and my mother’s loyalty, proved a potent early force. From very early on my mother perceived that poems just come to the young Hewett often when she is miles from paper and pen. It is my mother’s duty to remember lines, reciting them over and over again until they gain the house. Dougan writes:

she (Dorothy) would be quiet and withdrawn whilst the poem seemed to come to her and if we were away from the house I might be required to remember it or part of it so that it could be written down on our return home … I don’t remember feeling proud of her just that her writing was an integral part of her.1

The physical freedom of their shared early years is most apparent. This was not circumscribed by their ‘school of the air’ learning, which they managed to cram into a few hours each week. The rest of the time they were given freedom to roam within a half mile radius of the house which ‘included quite a large orchard and part of the creek…in those times before the depredations of excessive clearing and overstocking it was an extremely beautiful place … it cemented in both of us a life-long love of the country-side and, for Dorothy, the ability to revisit that landscape in her poetry and descriptive writing’ (29). In Lesley Dougan’s essay nothing, much like Wainwright’s To Walk Invisible, is sugar-coated. There is a full acknowledgement that Dorothy was not easy and was at times overbearing and bossy but that they remained the closest and dearest companions their whole lives together, and that my mother never really completely abandoned her role as enabler.

As we grew up our lives diverged. But whenever we met, it was as if we had never been parted. Children and partners realized that this was going to entail night-long conversations and their neglect. Looking back, they were fore-bearing. Dorothy was not good-humoured, and could be overbearing and difficult, but her generosity and loving heart made her easy to forgive. As well, she simply had a quality of charm that made me and many others want to be with her (31).

Once they lived apart as adults Hewett’s correspondence with her sister is littered with references to the many ways in which this support continued in both emotional and practical ways:

Thank you for that money for the dress. I haven’t bought it yet as I am waiting till I hear from the ABC as I think it might be more sensible to buy a summer dress, as Spring has come here already.2

My mother’s work on Hewett’s early years goes some way to correcting the rather skewed representation of Hewett’s mother, Renee Hewett (nee Coade), that has been abroad for some time now. In Hewett’s own work (poems and autobiography), as well as the work of various critics and reviewers, Hewett’s mother is fatally connected to a withdrawing from both the farm and Hewett’s beloved father, Tom. The complexity of this situation is sensitively presented in all its generational complexity in the latest critical work on Hewett’s creative beginnings, Tony Hughes-d’Aeth’s landmark study Like Nothing on this Earth: A Literary History of the Wheatbelt. For here, it is enough to suggest that, much like her sister, Hewett’s mother also did a great deal to orchestrate a creative environment for her daughters in a very isolated place by providing books and toys, and encouraging reading, creative play and performances. Despite this, in Hewett’s work it is the father’s presence that is most beloved, most yearned for, most missed; and it is the father who is connected to moments of intense aliveness in childhood. The following extract from her poem ‘Inheritance’ gives an emphatic sense of the loved lost places and figures of her childhood:

Hewett’s autobiographical essay ‘The Darkling Sisters’ charts the life of a house Hewett bought when she moved from Perth to Sydney. In this piece, generations of sisters, related and unrelated, imagined and real, are conflated in uncanny ways. She writes about her own sister as both her supporter – someone who understands that a writer needs ‘peace, quiet and protection’ (149) – and someone who also manages to turn the tables in her newly acquired ‘starry dark completeness’ (155) to renounce once and for all her role as little sister. In this piece my mother emerges finally as someone who, by both temperament and circumstance, becomes in a way the older sister. The piece is full of opposing impulses that underscore the complexity of creative sibling connections, and sibling relationships more generally: the little sister simultaneously defined as someone selfless and endlessly simpatico, and then as someone else – someone ‘so completely themselves’.