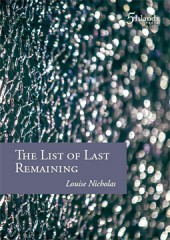 Louise Nicholas’s The List of Last Remaining very satisfyingly brings together a substantial body of her work. Its five, intelligently ordered sections each rise up to enact their shimmering, persuasive world and then fade out to make way for the next. As the author herself notes in the poem ‘Picture’, there is ‘something filmic’ afoot here. It is not surprising to learn that much of the book was written at a favourite café and restaurant, as there is such a human connectivity in these poems that consistently and deftly reach where they need to go without a fuss. As in a café, there are light and dark corners too, an organisational trope for this book. There is something in Nicholas’s intimate yet tough and often subversive observations that reminds me of the work of the New Zealand poet Elizabeth Smither. Like Smither, she is interested in the telling detail – no surprise, then, that windows and watching pervade as imagery. But equally there is the creation of a sharp, bemused persona alert to the collision of discourses that only finely-tuned experience can bring; and with this humour, a sense of the absurd, and always a troubling and deepening of tone. This is a great gift because not only does it let the world in, and allow the poet to inhabit and connect with a myriad of other subjectivities, but it also saves the work from overt sentimentality.

I keep searching for an epigraph for this book. At first I think that it is Forster’s hold-all only connect but then later I think it is Ondaatje’s quip that writing is really ‘picking up the pins’. The elusive thing, the thing seen out of the corner of one’s eye, as in the button on the lawn in ‘Sunday Afternoon Arts’ and the comic flowers in ‘It’s rare’ seems to come close to Nicholas’s manifesto. And yet she is not a poet that needs the surety of a manifesto. Her tread is far too light and also she is way too attuned to uncertainties. There are no grand statements here but there is an openness and generosity and, I think, ultimately there is a very real and successful attempt to come to terms, if one ever really can, with living and ageing in uncertain times. Google part of its sepulchral-sounding title and you are offered ‘seats’ or ‘relatives’ as finishers for the phrase ‘last remaining’. These overlap unnervingly to evoke the phrases around catastrophes such as 9/11 and MH17, both of which are dealt with in greatly sensitive ways in the fourth section of the collection.

From the sense of wry observation and recreated, almost art-directed, scenes in which the ‘décor of another’ may be borrowed, notions of framing emerge as important for this poet. These assert themselves structurally, with section titles taken from key lines – beginning with the mythic spaces of childhood and presiding parents, to life on a Kibbutz, to poems that tenderly and frankly describe experiences of birth and death, to a broadening canvas of the complexities of contemporary life sometimes leavened by ordinary joys, and finally to a series of skilful homages to other poets amongst some other poems. To describe each section schematically would do a disservice to the subtle inter-weavings and repetitions of key preoccupations and images that create satisfying cumulative effects throughout. There is a chronology of sorts here, a kind of journey of a soul, but it is not any kind of gridlock and at several points any surely retrievable narrative is beautifully challenged in poems such as ‘Picture’, with its ‘adjustable frame’ that re-envisions a childhood past from differently placed apertures; or the very fine ‘The brown-eyed boy’, in which the almost intolerable freight of the past is reinvestigated in what appears to be a looped and disorienting repetition and remix of events, belongings and persons:

This collision between linearity and a sense of subjective time, and also the way that the dandelion chains of ‘Picture’ seem to stretch out and pull against the stilled frames of memory, mean that times past are always revisited and revised in interesting, knowing ways, and that any kind of easy nostalgia is avoided.

There is something gorgeously picture-bookish about the resonant details of the childhood material: country jaunts, rabbit stew, a seamstress mother with June Allyson hair, and a bomber pilot, ‘Clark Gable look-alike’ father. Nevertheless, Nicholas is no fantasist and the childhood poems are often tinged with unsettling details that make them tonally rich and multi-dimensional such as the rather sinister ‘blue ice-blocks’ that when sucked become ‘hard lumps of fear’ in the opening poem, ‘Coffin Bay’. Her sometimes picture-book aesthetic, also a function of the references to details of her parents’ lives, marries the cosiness of the Ahlbergs with the darker grittiness of someone like Posy Simmonds. Once or twice there are overt references to this aspect of her work: in the rather comfy, self-ironizing line ‘back in time for tea’ that follows the opening poem’s fear of rehearsing the death of parents by drowning; or in the very apt image of the bus in ‘Nazareth’, ‘as it careened through the pages / of the Children’s Illustrated Bible.’ These seemingly casual intersections of doom and cosiness get inside that sense of feigned catastrophe that is the province of childhood’s imaginary. And it must be said that one very lovely feature of Nicholas’s work is the way she acknowledges both the power and ambivalent presence of fear and desire in the realm of childhood experience.

A sense emerges from this collection of Nicholas as a poet amply involved with her practice and within her poetry community. She has developed an unpretentious, flexible and often playful style that incorporates dialogue most effectively. Whilst I both enjoyed and admired the witty homages to various poets in the final section I must admit to feeling a little wary about the poem ‘Sharon Olds is Smiling’. Olds’ male counterparts in this medley – Frost, Amichai, Ashbery, Browning and Bly – are not laden down by seemingly pesky autobiography (‘forgiveness for a husband’) or media constructions of their physical appearances. As if not much else were at stake, they seem defined and given over to their work in purely stylistic ways. I am not really sure why this poem constructs the word cunt as the ultimate unmentionable. To me, some assertions in this poem seem to sit oddly, although perhaps self-reflectively, against Nicholas’s own poetry, which is surely at its strongest and most engaging exactly in this territory of autobiographical frankness. Take for instance, a poem such as ‘The wharfie, the dressmaker, and the fifth child’.

Pages: 1 2
This entry was posted in BOOK REVIEWS and tagged Lucy Dougan. Bookmark the permalink.
Lucy Dougan's books include White Clay (Giramondo) and Meanderthals (Web del Sol). Her latest book, The Guardians (Giramondo), won the 2016 Western Australian Premier’s Book Award for Poetry. She works for The China Australia Writing Centre at Curtin. With Tim Dolin, she is co-editor of The Collected Poems of Fay Zwicky (UWA Publishing, 2017).