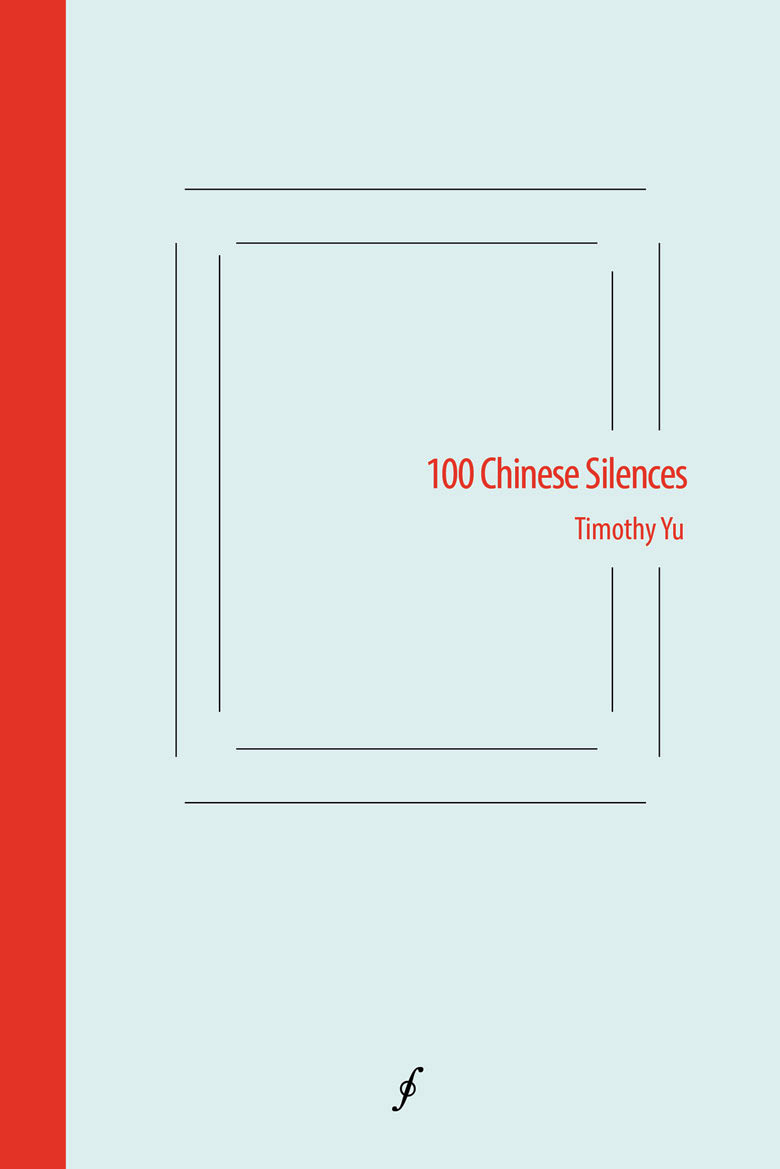 Recently I watched a program on the resurgence of Pauline Hanson. In one scene Hanson stands in her old fish and chip shop in Ipswich, Queensland, a business she sold to a Vietnamese Australian lady named Mrs Thanh. Hanson boasts of her hard work, and takes over the frying. Hanson proceeds to advise Mrs Thanh on how to make potato scallops fluffier. Mrs Thanh can only look on, smiling, embarrassed, irritated, and above all unable to reply, as there seems to be nothing that Hanson can’t say to the camera on behalf of her. Mrs Thanh’s is a familiar silence, one that exists among a multitude of silences. Asian-American poet Tim Yu’s latest collection, 100 Chinese Silences, makes me wonder about how such cultural silences, and silencings, affect creative production in this country.

Perhaps Mrs Thanh wanted to say something, but judged it better not to say anything lest it upset Hanson’s sense of singular expertise. For Hanson, success in Australia earns white privilege, and this privilege is conferred on migrants only after whites decide to accept them. Hanson grants permission to the migrant, and gives warnings disguised as free advice; to be as successful as the whites, migrants must do what the real Australians say. They must even cook potato scallops like whites. But how should they write? Strident voices such as Ouyang Yu, Omar Musa, Maxine Beneba Clark and many others talk back and refuse to allow Chinese, Malaysian, and African-Australian presences to remain silent. As marginal writers, they don’t shirk their duty of upsetting the status quo. Yu is equally provocative, and this latest book is an expansion of an earlier collection, 15 Chinese Silences (2012). Yu observes that in this collection, ‘I took it upon myself to write these silences, which for me became a symbol of the way Asia and Asians are present, yet silenced, in American culture’ (Poetry Foundation). In 100 Chinese Silences, Yu frames many of his poems as ‘after’ seminal American poets like Ezra Pound, Marianne Moore and Gary Snyder. But Yu’s faux-dedication devices announce his dis-figuring (vandalising) method. As a Chinese Asian-American he is well placed to do this.

Yu’s ‘Chinese Silence No. 14’ illustrates the collection’s mix of humour and satire:

Yu is ironic and knowing in his word play, deploying an accessible diction that draws on Western popular culture, Asian-American film, and contemporary media storms:

A major strand of Orientalism took shape with the American appreciation of Japanese art. The spearhead of this movement, the historian Ernest Fenollosa (1850-1908), also took to producing idiosyncratic translations of classical Chinese poetry. Yu destabilises Orientalist representations of ‘the East’ by drawing our attention to how reductive and generic these are. American poets might evoke an Orientalist aura by adopting of stereotypical genres, such as the Father Poem, or the Mother Poem. They might insert snippets of Confucian and Buddhist wisdom, and place misty mountains in the distance. For Yu, such acts equate to a process of commodification. Theoretically, cultural borrowing might work both ways, but in the American context (if not our own), Asian culture sits in an unequal position, subject to capitalistic hierarchies of reward and consumption. In ‘Tony had read a lot of Chinese poems,’ Yu takes aim at the academic industry and its complicity in cultural filtering and silencing:

‘Chinese Silence’ is limited a political position that Asian-Americans (and other ethnic groups) are compelled to adopt in order to avoid victimisation. But rejecting political and cultural vociferousness carries the risk of enabling mainstream white America to maintain this passivity. The mainstream holds up the ‘model minority,’ who are praised especially for their entrepreneurial success in a capitalist system. Through this cultural splitting, Asian-Americans are prevented from connecting with other key minorities, such as Latino Americans and African Americans.

Yu’s relentless irony can be overwhelming; I quickly ‘got the message.’ A few too many of the poems open with ironic clichés: ‘the Chinese deceit as natural’; ‘I’ve got the inscrutable Chinese blues’; ‘The Chinese are aloof in their silence.’ Such stereotypes are powerful and Yu succeeds in using them to undo them. Still, I sometimes felt uncomfortable with this book. Would it have helped be more familiar with the American poets Yu lambasts; or, as a poet myself, to have developed my career there? As Yu once said to me, when you go to college in America and you are Asian-American, you join the Asian-American club and you stay in it. Is this also the case in Australia?

Yu’s 100 Chinese Silences is committed, thorough and relentless, and delivers a clear message: poets within American poetry operate as agents in any other market, with Asian-American poets making up a sizable division, constrained by this market to produce according to type. But if the box is wrong, destroy the box. I reflect on Mrs Thanh here: why keep making potato scallops the way Hanson’s customers like them? Is this, at worst, a kind of resignation to assimilation? Or is Mrs Thanh’s cooking up a canny survival tactic? 100 Chinese Silences is funny and entertaining, with an experimental approach to form. The collection includes an ‘interview’ poem, some micro-fiction prose poems, catalogue poems, and, of course, the satirical ventriloquism of a wide range of sacred and revered American poets. I admire its ambitious scope. Yu is irreverent, iconoclastic, and downright offensive. This is a provocative intervention.

This entry was posted in BOOK REVIEWS and tagged Adam Aitken, Timothy Yu. Bookmark the permalink.
Adam Aitken was born in London and spent his early childhood in Thailand and Malaysia. He has been a recipient of the Australia Council Paris Studio Residency, and was Visiting Distinguished Professor at the University of Hawai’i Manoa. He co-edited the Contemporary Asian Australian Poets anthology (Puncher & Wattmann). His memoir One Hundred Letters Home (Vagabond Press) was published in 2016 and was listed for the ASAL gold medal. Archipelago, his latest collection of poetry, was shortlisted for the Kenneth Slessor Award and the Prime Minister’s Literary Awards in 2018.