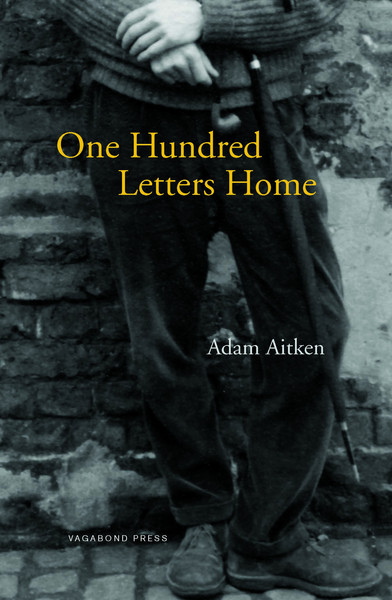 It has taken me more than a hundred days to read Adam Aitken’s One Hundred Letters Home. The book arrived in my letterbox in Sydney at the beginning of May. Autumn turned into winter, and the fragments of Aitken’s palimpsest-memoir started to unfold themselves to me.

Like Aitken, I am ‘diasporic’, an Asian-Australian, ‘a person separated from a point of origin, birthplace, from his mother tongue… disconnected from memory and from continuity of identity.’ For me, the act of writing is an act of recovery, of piecing together, of recording, re-ordering and re-inventing.

With a deft, sifting hand, Aitken has interspersed the main body of his work with poems, photographs, letters, transcribed conversations, and newspaper clippings. This is writing that requires you to undertake the quest of the author alongside him. Time, people and events are presented out of joint; orbits of meaning overlap like memory.

We are told that parts of the memoir have been fictionalised, that names have been changed, and that the author had permission from his parents to publish the book. This self-censorship, presented without artifice, creates yet another layer of meaning for the reader to negotiate. What is truth, what is invention, and what lies in between?

The cityscapes of Bangkok, Kuala Lumpur, London, Perth, and Sydney form a shifting background to a young man’s search for his identity. The question of one’s identity is one that is rarely easily answered, and much less so in the case of Aitken, a young man of mixed parentage and a peripatetic childhood.

Aitken examines his racial and cultural identity in tracing his parents’ origins, their meeting, union and subsequent separation. He questions what it means to be Thai, to be Australian, to be luk krueng, a half-caste. The first level of identity is skin-deep: Aitken speaks of the moving boundaries of his identity in response to questions of his origins. He tells his doctor that he feels like ‘an incomplete translation of a Self.’

The book, then, is a chronicle of a young man’s attempt to construct his personal identity in different places, at various stages of his life, and in multiple ways. Aitken searches for the essence of who his father is / was: an ad man, a copywriter, a photographer, a gardener, an Australian in London, a white man who married a Thai woman, the repatriated expatriate.

In her treatise On Photography, Susan Sontag writes that ‘[a] photograph is only a fragment, and with the passage of time its moorings come unstuck.’ Aitken states that ‘[w]e undo forgetting by writing about photographs.’ Much of his family and personal history is presented as a series of gaps: lost to the narrator as well as his immediate family are not just photographs, but letters, wealth, extended family.

English is Aitken’s first language, but his mother tongue, the language of his mother and her family, is Thai. Yet his mother had refused to speak Thai to him, in effect denying him part of his cultural heritage. Was this an attempt to not confuse him; to make him more white? Aitken says that his mother never wanted him to become a Thai man.

In 1982, Aitken, then a ‘bohemian Sydney poet,’ returns to his mother’s homeland of Thailand to live with extended family, to learn Thai, to become Thai. He states that his ‘stay in Bangkok was a project in identity reversal.’ As he learns the language, his personal, Western identity is integrated into the layers of Thai identity. Inherent in the language, in the ‘ingrained Thai necessity of speaking of oneself in the third person,’ Aitken learns that he is ‘no longer [only] Adam.’

The central puzzle of identity is further confused by language: Thais ask Aitken ‘Where do you live?’, which sometimes sounds like ‘Why did you leave?’ This conflation of origin and destination, of inherited purpose and autonomous decision is representative of the complexity of the narrator’s quest. To a Thai person he meets, upon admitting that he did not speak Thai with his mother, ‘it was impossible to lose one’s Thainess and the language that accompanies it.’

As a child arriving in Sydney with his parents, Aitken reflects: ‘my sense of anxiety as to where I came from and where I should belong had become more acute.’ Aitken wants to become a sailor, then an artist, then a musician. Aitken feels out of place in his new/old country: he says that ‘[i]n 1968 no Australian boy was called Adam.’ He also speaks of the ‘pressure to explain the face, origins no one can guess first time.’ Yet, he says: ‘I like that. My face is my passport. I realise now that a face is a mask that hides another mask.’

Aitken hints that he is to later discover that ‘it was Okay to sound colonial, awkward, effeminate and Third Space.’ He says: ‘‘[n]ow I know that Adam is a good name. It just means first-born’. What does it mean to be Australian, or to be Asian-Australian? One Hundred Letters Home offers up no easy answers, no direct route to a neatly resolved narrative, but exemplifies one writer’s restless search to map out the ever-changing lands of history, family, desire and self.

Aitken’s book recalls other wonderful memoirs by poets, such as Li Young Lee’s The Winged Seed: A Remembrance, Philip Levine’s The Bread of Time: Towards an Autobiography and Kim Cheng Boey’s Between Stations.

This entry was posted in BOOK REVIEWS and tagged Adam Aitken, Eileen Chong. Bookmark the permalink.
Eileen Chong was born in Singapore of Hakka, Hokkien and Peranakan descent. She is the author of nine books, the most recent being A Thousand Crimson Blooms (UQP, 2021). She lives and works on unceded Gadigal land.