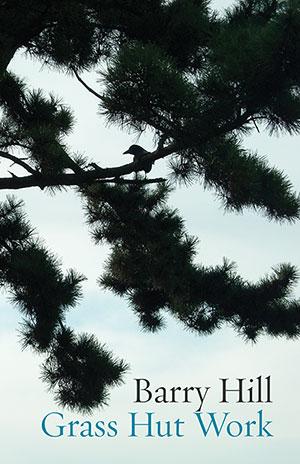 The poems in Grass Hut Work are a kind of coda to Barry Hill’s 2014 non-fiction epic Peacemongers, a book of self-discovery and intellectual journeying that took him to the heart of the East, to India and Japan.

Out of this opus was born a slim volume of poems, so beautiful, so hungry for meaning, so redolent with the history of Japan’s poets, as to contain the world within its lacquered shell. From the opening lines of the magnificent ‘Bow to the weatherman,’ Barry Hill draws the reader in, not least with his seductive use of the second person, and brings us along the old path to the poet’s grass hut. Here you take off your shoes …

Later in the volume, Hill takes the reader to Sapporo for some first-hand reports of the weather and other insights into the poet’s mind. In this way the collection performs its
dual functions, seducing the reader with a bright and practical travelogue while enjoining us to seek further inward along the ancient road to the soul. Hill follows the paths trodden by Japan’s great poets – Basho, Kenji, Ryokan, Dogen – seeking enlightenment, and seeking peace through his immersion in the poetical history of the country.

The journey begins in Kyoto, a landscape littered with hacked turnips, gleaming cabbages, and picturesque paths. There is always a gate, a path, a low stone wall, a perfectly pruned tree. Sign posts leading to one hut or another. There is always a duality at work. Ageing and youth. Inside and outside.

Outside, the paths of Kyoto are pitted by self- doubt: ‘The all-too-familiar earth /
The same, same self.’ Alone in his hut the poet asks: ‘Are you writing the same poem / or just getting older…?’ From Kyoto we head to the north, to Sapporo and beyond, the country of Zen Master Ryokan, where the winds are icy and the people,

The pong of crabmeat pervades everything and the cold sea melts the snow ‘in this “excessively lucid landscape.”’ It is too cold for insight and the poet heads south again, into Kenji country. Even as he reads Kenji on the train, Hill acknowledges a debt to the great poet.

Hill travels next to Hiroshima, where the contradictions of culture and history are so stark. The poet travels heavily here as if weighed down by falling ash: ‘Summer, and not a flower to be seen.’ It is here in Hiroshima that his interior struggles take on a more urgent note: ‘In the grass hut / I strive to be nobody.’ It is a striving to be everyman, this absolution of self, but as Hill laments, it is not possible here, particularly here, in Hiroshima, to forget: ‘Anyway I’m afraid / Of not feeling a thing.’ And this was Basho’s sin, that lack of empathy.

Leaving the cicadas of Hiroshima behind, the poems take us back to Kyoto, and a sense of inner peace, or at least, resignation, descends. We are disciples too. The poems frequently use the second person, imploring and guiding the reader along the disciple’s path.

And this is where Barry Hill leaves us, bewildered and dazed by the experience, in full possession of the wisdom and self-doubt of a remarkable poet.

This entry was posted in BOOK REVIEWS and tagged Barry Hill, Peter Mews. Bookmark the permalink.
Peter Mews is a Melbourne bookseller and novelist. He is the author of Maritime and Bright Planet.