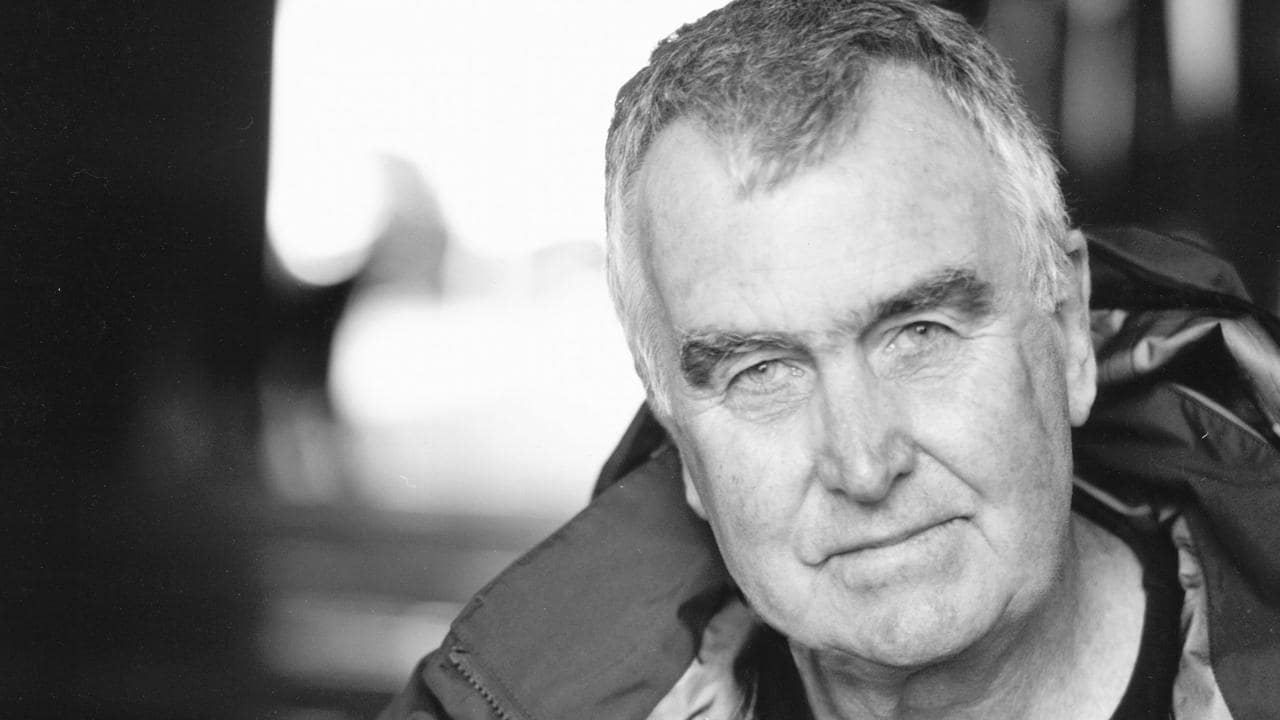 Image courtesy of The Australian

Writing, because it can’t help but be critical, might help make peace
— Barry Hill (R 463)

Deep criticism is a kind of poem […],
or at least prose that delineates the poem that is trying to surface from the analysis
— Barry Hill (R 255)

Criticism must attack form, never the content of your ideas, of your phrases. Do as you
please. Sentiment is the most incomplete imaginable form of reasoning
— Lautréamont (Poésies)

a. Justice is Barry Hill’s overarching leitmotiv.
b. We need a collective narrative. This narrative of unfinished business involves truth-telling, an acknowledgement that what happened (massacres, stolen generations, etc.), happened. Taking ownership of this in the present does not mean accepting guilt or responsibility for what happened in the past, the past of our ancestors (if you are second- or third-generation Australian, you may be absolved when it comes to Aborigines, but do not think your past is pure), except in practical measures, such as reparations or compensation. Hill noted in his essay on Judith Wright that ‘Indians in Canada seem to have made general progress both with the principle of a treaty and land claims, whereas [in Australia] the general failure was signed and delivered when the Hawke Government proved to be like previous Coalition governments in bowing to ‘the States’ (Conservative Premiers acting as joeys to Development cowboys). Hence the crying need for the treaty, argues Wright’ (R 201).
c. Gap as a kind of caesura, like gap in a hedge.1 Gap as porous. There are two Australias — what makes Australia, Australia? Hill asks.
d. The Japanese for ‘gap’ (space) is ma (a part of mu).
e. Hill does not mention the word ‘gap’ at all in P, except in a quote in an essay titled ‘Dogs and Grog’: ‘In this way we are inducted into the depth of Craig [San Roque]’s broodings about ‘the loss of integrity in indigenous culture life’; the nature of people’s ‘peculiar kind of depression’; ‘the web of memory-systems developing too many gaps …’ ‘ (R 345). He does not need to.
f. From the outside looking in: the impossibility of crossing into Aboriginal culture. The risk of cultural appropriation, as in Chatwin’s Songlines, more English than its subject, as Hill observed (R 229), or T. G. H. Strehlow, who ‘translated Aboriginal song under the heading of Desire’ (R 227). Hill ‘spent about ten years on the [William] Buckley poem. I was going towards Aboriginal culture, but equally I was deepening my sense of inhabiting my own place, which was once their place’ (R 228).
g. Travelling is not necessarily knowing, either. ‘I did learn about listening, about silence, and layers of silence, characteristics of the White idiom, as we know from Henry Lawson, among others, and as I knew anyway, having been brought up in a small, reticent working-class household’ (R 229).
h. Indigenous songlines are in P (‘black men and women making their way into contemporary songs of their own’ 204), but mostly in R (‘shared singing and dancing — the best metaphor I know of cultural tolerance and understanding’ 56, Strehlow’s Songs of Central Australia).
i. ‘What did I care for any crews, / Carriers of English cotton or of Flemish grain!’ (AR 93).

a. The violence of ignorance (‘I hated the whole business of being the intruder, of taking up people’s time with my notebook and never-ending ignorance’ [R 229]).
b. ‘[T]he mediocrity of Buddhist ceremonies, especially when the sutras are chanted too long by monks who are not good-looking’ (R 400 — Hill is repeating one of Sei Shônagon’s complaints).
c. Bombs often score a direct hit; criticism is not a weapon but a dance.
d. They say truth is the first casualty of war; it is also the first casualty of ideology.
e. They say peace is hard to achieve. Perhaps peace is an illusion?
f. The atomic bomb, by which I include the hydrogen bomb, must be the most evil invention ‘humanity’ has ever come up with. Even Dante only mentioned the end of the world three times in The Divine Comedy, twice in hell and once in heaven.2
g. Chemical and germ warfare has been used in a limited sense so far, for the perpetrators can easily lose control and find that such weapons can have an inverse effect.
h. The last line of Rabindranath Tagore’s last poem reads: ‘the unwasting right to peace’ (quoted in P 270).
i. ‘[Hersch Lauterpacht] suggested that the word ‘Aggression’ be replaced with ‘The Crime of War’ and that it would be preferable to refer to violations of the laws of warfare as ‘War Crimes’. Titles would make it easier for the public to understand the actions being prosecuted, useful to garner support, adding to the legitimacy of the proceedings’.3
j. I once wrote in a poem that history was a crime against humanity, which seemed to confuse a lot of people. The above is what I meant.

a. The poem is. The choice of words. The evanescence of words but the ever-presence of poetry in the mind. The poetry of metaphor, images and tropes. Perhaps topics (utopia — from the Greek, where the first vowel refers either to absence or wellness, and topia, place, whence ‘topic’ also comes).
b. Ontological: ‘I am the poet of the body, / And I am the poet of the soul’ (WW 56).
c. ‘But he was characterised by piety as much as poetry’.4
d. Eternal values. ‘A man heretical, he can’t be lost / To that point where eternal love can’t save / His soul, if hope keeps love free from the frost’5
e. Painting, like poetry, often is.
f. Chess is emblematic of order, the opposite of chaos.
g. Being as godhead.
h. Being as mystery. Fay Zwicky in ‘Hokusai on the Shore’ wrote: ‘Who keeps / a steady eye on mystery?’ (FZ 302).
i. Hill uses ‘Reason and Lovelessness’ as the title of Chapter 6 in P.
j. As Nabokov said, ‘the marvel of consciousness—that sudden window swinging open on a sunlit landscape amidst the night of non-being’.6

a. Thousand is a nonsense (magical) number. It is not meant to be taken literally.
b. Taoists like to use the term ‘ten thousand’, when the term is nonsense.
c. Hill works for truth intellectually as did his father, Neville Hill, as an activist (‘My old man never seemed to tire in his activism’ [P 566]), even though he knew that an ergatocracy would always remain utopian. Working for truth may necessitate nonsense in some but not in Hill (who knows the difference between nonsense and meaninglessness). He may turn to Aristotle (in R), Brecht (in G, P and R), Einstein (in P), Jesus (in P and R), Kant (in P and R), Marx (in P and R) or Nietzsche (in P and R) as equally as Buddha (G, P and R), Laozi (P and R), the Dalai Lama (R, where he asks why his holiness laughs so much) or Confucius (P and R), as have many other writers, including Akutagawa and Voltaire. Neville Hill was a major influence in Hill’s life and, therefore, in his prose.
d. As Norman Mailer said more than sixty years ago: ‘It is likely that the survival of capitalism is no longer possible without the creation in the consumer of a series of psychically disruptive needs which circle about such wants and emotions as the desire for excessive security, the alleviation of guilt, the lust for comfort and new commodity, and a consequent allegiance to the vast lie about the essential health of the State and the economy, an elaborated fiction whose bewildering interplay of real and false detail must devil the mass into a progressively more imperfect apperception of reality and thus drive them closer to apathy, psychosis, and violence’.7
e. ‘High time to crack down hard / Once more on trade within the temple walls’.8
f. The father as shadow, as representative of the previous generation. Neville Hill haunts the pages of P; he is not someone to be metaphorically killed, as Freud would have it, but the fount of wisdom, a force of nature, someone who strove for peace.
g. ‘[I]t was the very tenor of the revolutionary slogan: the workers will liberate themselves’.9
h. Tagore is one of the subjects of P, but he is also mentioned extensively in R. He travelled in Tagore’s footsteps in Japan. He is — and was used, when he was the toast of London society in the early twentieth century — used anachronistically as a counterfoil to Saidian orientalists, who adopt everything Eastern as an outer clothing without any deeper understanding.
i. Work is the labor of the factories, not the labor of colonialism.
j. Masses of people migrating in the hope for a better life. Displacement. The myth of being a pioneer. Transatlanticism (a transposition of European culture — my word for ignoring what goes on in the world other than America and England). Hill writes:

[Robert Manne]’s defence of Middle-Eastern refugees is partly based on the political horrors they have been through, which the policies endorsed by relaxed and comfortable Australian leaders callously ignore. [R 85].

Pages: 1 2 3 4 5 6 7 8
This entry was posted in ESSAYS and tagged Barry Hill, Javant Biarujia. Bookmark the permalink.
Javant Biarujia is the author of eight books of poetry, including Calques and Low/Life, the latter written while on Asialink’s writer-in-residence in Indonesia in 1998. In 2007, he published pointcounterpoint: New and selected poems 1983 – 2008, while Spelter to Pewter (Cordite Books, 2016) is his latest book.