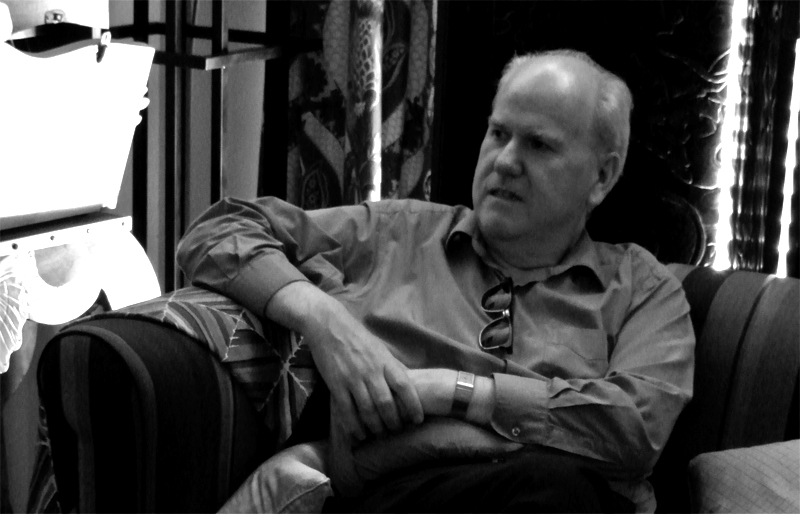 Javant Biarujia is an iconoclastic Australian poet, at once an unparalleled linguistic confabulator and an exponent of Melbourne avant-garde poetics since the 1970s. He is the author of seven collections, such as Calques (Monogene, 2002), Low/Life (Monogene, 2003) and pointcounterpoint: New & Selected Poems 1983 – 2008 (Salt, 2007), and numerous chapbooks. Biarujia’s work marks out its own historical forebears and familiars in a way that I believe – although absolutely in association with contemporary histories of poetry such as American Language poetry, Australian bricolage, and European surrealism – happens to hybridise baroque linguistic ingenuity with deconstructive collage and games of poetic reality that defy straightforward historical alignment.

We can see Biarujia’s unique travel experiences and his etymological and intertextual imaginary finding an important conduit in the small press explosion and poetic internationalism of the 1970s and 80s Australian scene. Biarujia’s press Nosukumo was one such participant, publishing Australian experimentalists such as (Francesca) Jurate Sasnaitis, Chris Mann and Pete Spence. But Biarujia is a poet of the twenty-first century and perhaps always has been one for the future; his most recent book Resinations (Otoliths, 2012) at home in the international, twenty-first century poly-modal experimentalism of the Otoliths catalogue. This Melbourne issue provides an ideal opportunity to discourse with Javant on his perspectives on poetry and poetics. He is an impressive interlocutor and a surprising thinker of poetry.

Corey Wakeling: Neologism, the creation of new words, and paronomasia, or punning, to me not only represent the major approaches of your work from your early Nosukumo books until now, including your most recent collection Resinations, but lead me back to your name – Javant Biarujia, a creation of your own – and the notion of self and creation in poetry. In the context of discussing neologism and self-creation, allow me to recall your story about that expression from La Recherche by Marcel Proust. The quotation is this: ‘its azure had the effect of being the colour of the windows and its white clouds only so many flaws in the glass’. You said to me that when rereading La Recherche, you recalled, in turn, that this is the title of Patrick White’s autobiography, Flaws in the Glass, and that it was your recollection of this favourite phrase which manifest the realisation that this was a connection White was suggesting all along to autobiography. A similar kind of phrasal serendipity, if you like, is foregrounded in epigraph in the poem , ‘The German Consulate in Melbourne’, where Giorgio de Chirico’s mention of a ‘German consulate in Melbourne’ links to Australian novelist Christopher Koch, who you indicate is the ‘grandson of J.A.B. Koch, architect of the German Consulate in Melbourne’. If I can hazard one proposition then about your work in this light is that sensibility, that memorably Proustian subject, and poetic sensibility particularly, is a means of translating formerly dissociated elements into an association. What do you think, Javant, as a logodaedalist of your own name?

Javant Biarujia: In 1978, having just turned 23, I legally changed my whole name by deed poll, encapsulating the essence of the private language, or langue close, I call Taneraic, into my new name. I had invented a private language at age thirteen so that I could write unencumbered in a diary begun a couple of years later. (Invention, or creativity, is simply the striving for and achieving something new.) Taneraic started out as a dictionary code and got more complex as I became more familiar with grammar, and became what I call a language when it started using inflexions. Definitely not the mark of dictionary codes. George Steiner said that if more than one person could communicate in such an artifice, he’d concede it was indeed a language. Well, American poet and language-constructivist Michael Helsem and I have been communicating for years in Taneraic. Often, he is ‘ungrammatical’, but I can still understand him, whereas if you make a single mistake in a code, the message it carries will more than likely end up a meaningless jumble. Not that I have anything against meaninglessness! (I can see my surname in a French word for gibberish, charabia, which was by no means intentional, but rather serendipitous. Mind you, what’s most obvious is char, as in René Char, who went in a complete circle from Surrealism to humanism and finally to mysticism.)

I encapsulated Taneraic for, after eight years, I abandoned my private language for English, and within six months of having adopted my new name, three poems I had written on Kenneth Anger and Anaïs Nin were accepted for publication in Campaign, Sydney’s main gay monthly magazine at the time. People are naturally intrigued by my name for its very exoticism, for it doesn’t quite fit anything people are familiar with. On the other hand, I have never tried to conceal the origins of my name, or tried to jump on the multicultural bandwagon. (My family, sympathetic to my poetic ‘ambitions’, were quite pragmatic when they pointed out that B is often found at the bottom of a bookshop’s or library’s shelves and so overlooked by people with bad backs!) It was only later that I discovered poets like Paul Goodman wrote on constructed languages, and later again, that I was not alone and that many poets had constructed their own language – or parts thereof, from 19th-century German Stefan George to 20th-century Australian writer Robert Dessaix – and that poets like Charles Bernstein considered what I was doing as a ‘poetic experiment’.

Flaws in the Glass was the title Patrick White gave to his memoirs, that came out in the early 1980s. It was so vituperative I renamed it ‘Claws Up My Arse’ as I read it, but I didn’t know the title was from Proust until I read the phrase a couple of years ago. The connection White was referring to – like Proust – was the fallibility – or flaw – and distortion of memory.

The epigraph of Christopher Koch in my poem you mentioned earlier, ‘German consulate in Melbourne’, where he maligned deconstruction, was from a quote I read somewhere in The Age, Melbourne’s daily newspaper and, until recently, a ‘serious’ broadsheet. Privately, there was another connection, for my home for just on 25 years was a flat in another Melbourne property that his grandfather built, Labassa, during the period that was known, doubtlessly without a shadow of irony, as ‘Marvellous Melbourne’. The 19th-century mansion has since become part of Australia’s heritage, but that didn’t stop developers from wanting to demolish it. (It took the National Trust to buy Labassa late 1980 to save it, where it’s languished in a parlous state ever since, but that’s another story.) Australians in general are ahistorical, not valuing or undervaluing their heritage, cultural or otherwise, and often only valuing something if a profit can be made.

The most famous exponent of deconstruction was Jacques Derrida, who was very playful and taken most seriously. I believe his famous theory of erasure is no more than his punning on the word littérature: Littré, with a little metathesis, was his favorite lexicographer, which leaves rature, French for erasure. American universities especially lapped this up, so I am sympathetic to Christopher Koch’s standpoint, for I, too, am aware of jargon, and the insidiously virulent kind that sprang up in Derrida’s wake, which I have dubbed Academese. Of course, I prefer Kenneth Koch, an example of ‘association’ you talk about.

CW: Kenneth Koch’s blending of pun, anecdote and fiction fits with my sense of your work within this frame of self-creation and, indeed, self-erasure. Returning to memoir and memory as in the case of that curious recovery of the Proust quote in the context of White and your interest in what you call ‘fallibility’, ‘flaw’ and ‘distortion of memory’, I wonder whether sensibility is always a paronomastic act for you, associating formerly disassociated or unapparently associated meanings or terms? Your work can be funny, but further, the sophisticated and surreal use of paronomasia in your work constitutes a sensibility to me, or a deconstruction of sensibility.

JB: Thank you for your kind words. I wouldn’t say sensibility was always paronomastic. I hate the punning headlines in The Age, for example, and I think I’ll scream if I ever hear or read ‘Life’s a Beach’ again. I think humor is a serious matter and important to life and literature, hence my mention of Kenneth Koch above, and my maxim ‘Through levity to levitation’, which I have taken from the last line of my poem ‘Being, Its Own Reward’, with its Ashbery epigraph. This poem, with its careful attention to punctuation in the title, is a summary of my own philosophy of life and letters and is worth perhaps quoting in full:

I present these poems to you; we listen to the music (Voltaire — if you’ll forgive a literary raksasa introduced so brazenly — said poetry is the music of the soul). We allow for sensation if not sense, or sensibility. Wow! Was that a new sensation (in excess)? Right, delve into the meaning; swim in the meaninglessness. I love psychological analysis but practise catharsis interruptus. I have no power of observation, and mere description (mimetic simile) leaves me cold. Better poems that look like (oops, a simile), as someone said, “Chinese takeout menus”. Understanding is not the point. The imagination is the point, where metaphor knows the Tropez. Which is to sayn’t.

But what I love most is playing, which possesses its own inner logic. Play strips the pants off style and goes skinny-dipping in the pool of out of mind. Drift is not adrift, if you get my raft. Losing myself in the spontaneous overflow, from Aristotle’s Poetics to Marjorie Perloff’s “poessays”. As much as I can. I forget the currents, finding my own level, above and below consciousness. Poetry, like water, is necessary for life to flourish. Like breath. Unpredictable, the city of (Dis)connections. More than an image. Of charm, rarefying, refining, raising the arid zone, its flaming head severed from the body, flying in all directions.

You wonder where I’m taking you with my little craft, where you’ll be dropped off. After all, it is already late. And children too soon grow into adulterators, adumbrating childish wonder, picking their way through the Gap between ideas. Without poetry, we are deluded; we should surely grow older earlier.

Through levity to levitation …

CW: ‘Through levity to levitation’ – what a fabulous aphorism!

Pages: 1 2 3
This entry was posted in INTERVIEWS and tagged Corey Wakeling, Javant Biarujia. Bookmark the permalink.

Corey Wakeling is a writer and critic living in Tokyo. He is the author of collections Gargantuan Terrier, Buggy or Dinghy (Vagabond Press 2012), Goad Omen (Giramondo 2013), and The Alarming Conservatory (Giramondo 2018), and a monograph on Samuel Beckett's dramaturgy entitled Beckett's Laboratory: Experiments in the Theatre Enclosure (Methuen Bloomsbury 2021). Corey holds a PhD in English and Theatre Studies from the University of Melbourne. His next collection is entitled Debts of the Robots.

View all posts by Corey Wakeling on Cordite →