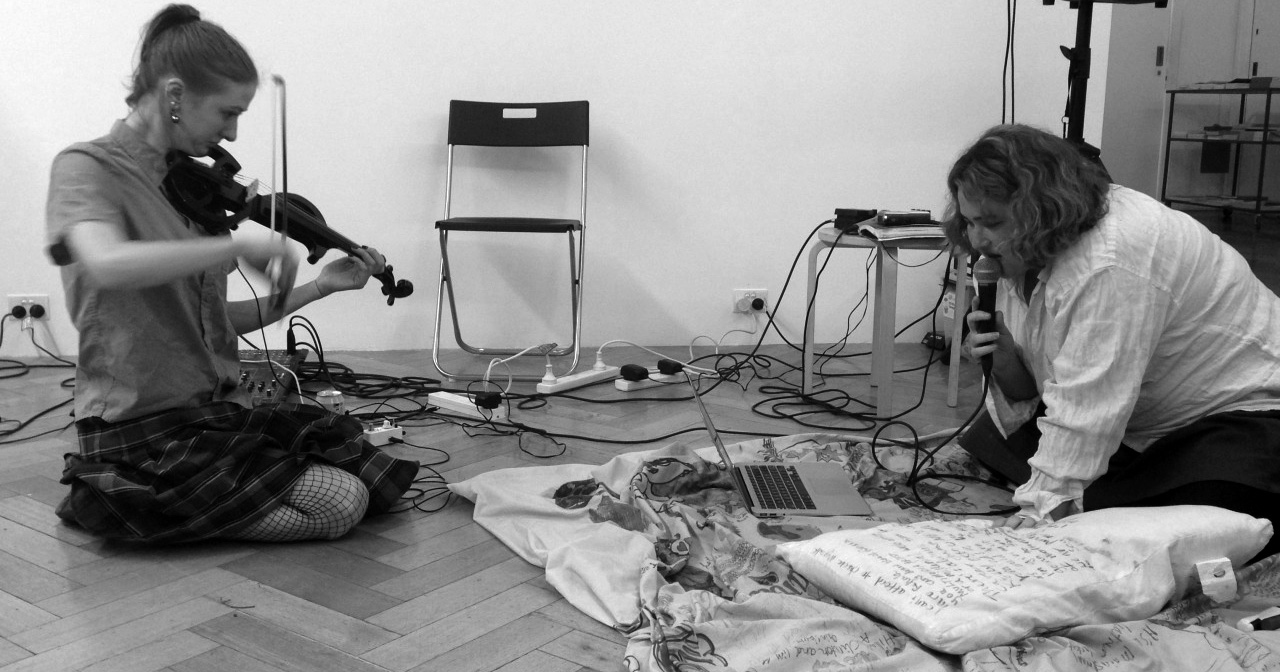 Molten Upset is a collective name for us – Autumn Royal and Lisa Lerkenfeldt – and we were stimulated by a kind of silence to co-curate the candidly titled event: Poetry & Noise. The event was held at West Space on 30 June, 2016, and it was evening of sincere overcasts and contemporary performances intended to generate spaces for the intersections of poetry and noise. In order of performance the evening featured: Elena Gomez (audio work), Hana Earles and Natasha Rose Havir Smith, Aurelia Guo (performed by Anna Crews), Dawn Blood, Lisa Lerkenfeldt, Sophie Cassar, Autumn Royal, Spike Fuck, Katherine Botten, Papaphilia, Eleanor Weber (performed by Jessie Hall) and Natalie Harkin (performed by Tarneen Onus-Williams and Nayuka Gorrie).

When it comes to listening, an act that may arguably be synonymous with reading, we followed the philosophy of composer Pauline Oliveros: ‘Listen to everything all of the time and remind yourself when you are not listening.’ Like Oliveros, musicologist Susan McClary embraces a poetic approach when considering sound. While this method might seem intuitive to many, over the years it has been demanded that McClary ‘purge [her] prose of its images and metaphors’. It is this objection – and thankfully McClary’s dismissal of this demand – that highlights one of the many connections between sound – or noise music – and poetry.

The objections to McClary’s work evoke what Muriel Rukeyser writes in The Life of Poetry: ‘Anyone dealing with poetry and the love for poetry must deal, then, with the hatred of poetry.’ It is this loathing of poetry that Rukeyser explores which reminded us of the social rejection of emotions, specifically women’s emotions.

Whether it is about music – including noise – Oliveros, McClary and Rukeyser all refer to the importance of dedication, especially when it comes to non-heteronormative practices of these mediums. Such ‘sincerity’ prompted Molten Upset to place this concept at the forefront of our exploration and confrontation.

In continuing with the theme of ‘sincerity’, the poet Lisa Robertson concludes her essay ‘The Weather: A Report on Sincerity’ with the lines:

I need to be able to delude myself, for as long as it takes, as long as it takes to translate an emotion, a grievance, a politics, an intoxication, to a site, an outside. Sincerity says that identity is moral. I need it to be a tent, not a cave, a rhetoric, not a value. There’s also the fact that my sex is a problem within sincerity. I want to move on. I want a viable climate. I’ll make it in description.

Poetry & Noise hoped for artists to present their own descriptions, to make things up, to embrace the murkiness rather than rely on clarity for concealment. Fundamentally, we will never be pure because we are here and as Cherrie Moraga reminds us: ‘the passage is through, not over, not by, not around but through.’

This entry was posted in ESSAYS and tagged Autumn Royal, Lisa Lerkenfeldt, Lisa Robertson, Pauline Oliveros, Susan McClary. Bookmark the permalink.
Autumn Royal is a poet, researcher and teacher based in Narrm/Melbourne. Her current research examines elegiac expression in contemporary poetry. She is interviews editor for Cordite Poetry Review, editor of Liquid Architecture’s Disclaimer journal, and author of the poetry collection She Woke & Rose. Her second collection of poetry is forthcoming with Giramondo Publishing.


More by Autumn Royal on Cordite Poetry Review →
Lisa Lerkenfeldt is the producer of the noise release Urban Body (Altered States Tapes 2015). Her electronics sets have been performed at venues including Gertrude Contemporary, MPavilion, Tape Projects and Make It Up Club. She paints, plays in the female noise band, Perfume, and DJs in and around Melbourne with an interest in industrial music and lesser-known female histories.