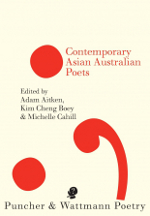 A decade ago, Cordite Poetry Review asked me to write a review of its tenth issue, ‘Location: Asia-Australia.’ In my review, I wrote that while the issue did a splendid job of showing the intersection between two separate places called ‘Asia’ and ‘Australia,’ it was less clear whether the ‘Asian-Australian’ could also be a thing unto itself, a kind of writing that might be visible within domestic as well as international spaces:

Asian and Australian writing, rather than regarding each other at a distance, might engage in a dialogue, even within the boundaries of a single text …What remains to be done is a more precise mapping of Asia-Australia, one that understands this relation as both external and internal, present within Australian writing itself.

You can imagine my surprise when I found those words, written in 2002, adorning the back cover of the new anthology Contemporary Asian Australian Poets. I didn’t know it at the time, but I was writing a blurb for a book that didn’t yet exist – and that wouldn’t come into being for more than a decade.

The wait, it turns out, was worth it. Contemporary Asian Australian Poets is a historic event – the very first anthology devoted to Asian-Australian literature – and it’s a tremendous success. Editors Adam Aitken, Kim Cheng Boey, and Michelle Cahill – all accomplished poets in their own right – have assembled a collection of impressive depth and breadth, encompassing 37 poets who trace their ancestries to China, Vietnam, India, Singapore, Indonesia, Sri Lanka, Malaysia, Hong Kong, Thailand, and the Philippines. Some are immigrants, while others are Australian-born; some directly confront issues of migration, cultural memory and loss, racism, and exile, while others approach such topics through allegory or formal fragmentation. The result is an appealing diversity of styles and themes, with work that ranges from the traditional and formal to the highly experimental

Is there a unity underlying this diversity? That is, does the anthology answer the question of what an ‘Asian-Australian’ writing might be? The term ‘Asian-Australian’ does not have the same wide currency that the comparable term ‘Asian-American’ does in the U.S.; ‘Asia-Australia’ still tends to be seen as an intersection rather than an identity. To be sure, there have been some moves toward the idea of the Asian-Australian over the past decade, particularly in the literary realm. Peril, an online journal of ‘Asian-Australian arts and culture,’ began appearing in 2006. The following year saw the debut of Mascara Literary Review, edited by Michelle Cahill with a focus on ‘contemporary Asian, Australian and Indigenous writers.’ Alice Pung’s 2008 anthology Growing Up Asian in Australia brought Asian-Australian coming-of-age narratives to a mainstream audience. But the relatively recent dates of these developments suggest that ‘Asian-Australian’ is a category still very much in formation, with little consensus about what the label means or how it is to be used. Indeed, we’re still in a moment where the Asian-Australian could fail to emerge as a useful category in Australian culture – supplanted, perhaps, by more ethnically or culturally specific labels, or by an absorption into Australian national identity.

It may not be obvious that literature plays a central role in the formation of national, cultural, or racial identity, but in fact the claiming of a literature that is distinctively ‘ours’ has frequently been essential to group identity. The emergence of traditions of American, Canadian, or Australian literature is deeply tied up with nationalism – if you think this isn’t true, just ask Canadians how they feel about Alice Munro’s Nobel Prize – and the same is often true of racial or ethnic identities. Literary movements like the Harlem Renaissance, Négritude, and the Black Arts Movement all asserted distinctively ‘black’ modes of literary expression as part of a claim to cultural identity, and the early magazines of the Asian American movement in the 1970s prominently featured poetry as part of their effort to feature ‘the voice of the people.’ The publication of an anthology of Asian-Australian poetry, then, is as much a political statement as it is a literary one, staking a claim to the distinctiveness of Asian-Australian expression.

Because of this dual political and aesthetic mission, anthologies often become known for their polemics as much as for their literary content. This has certainly been true in Asian-American literature. The 1974 anthology Aiiieeeee! and its sequel, The Big Aiiieeeee!, became famous for their editors’ emphasis on realism and social history and their attacks on ‘fake’ representations of Asian-Americans. The 1993 anthology The Open Boat: Poems from Asian America explicitly rejects this ‘culturally biased’ model of politicised writing in favor of aesthetic ‘diversity’ and ‘an appreciation of verbal beauty.’ Such anthology introductions are platforms from which editors lay out their visions of what Asian-American writing is or should be, whether those definitions be restrictive or expansive.

Timothy Yu is the author of two chapbooks, 15 Chinese Silences (Tinfish) and Journey to the West (Barrow Street), winner of the Vincent Chin Chapbook Prize from Kundiman. His scholarly book, Race and the Avant-Garde: Experimental and Asian American Poetry since 1965 (Stanford University Press), won the Book Award in Literary Studies from the Association for Asian American Studies. Other selections from his ongoing project, 100 Chinese Silences, have appeared or are forthcoming in SHAMPOO, Mantis, Kartika Review and Lantern Review. He is an associate professor of English and Asian American Studies at the University of Wisconsin-Madison.

View all posts by Timothy Yu on Cordite →