Further, jazz/poetry collaborations were made in the 1960s by British poets such as Jeremy Robson who performed, often in closely-arranged ways, with top British jazz musicians of the day, such as the pianist Michael Garrick and his sextet. Other poets involved in the series included Vernon Scannell, Dannie Abse and even Spike Milligan – who performed memorably with the sextet. An interesting feature of the recording that summarises these developments (Poetry and Jazz in Concert 250) is the alternation of poetry and jazz by themselves as well as various tracks combining the two. Similar mergers were attempted by Mersey poets (such as Adrian Henri) though they preferred, it seems, to work with rock rather than jazz musicians.

In the African-American civil rights movements of the 1960s and the early ’70s, many black musicians used important spoken word elements in their compositions and performances to promote their political agendas. This derived from the black American tradition of highly rhetorical preaching that informed the speeches of Martin Luther King. At the same time, the harmonic structures and melodic phrases of black gospel music were a crucial part of what in the early 1960s became known as Soul Jazz or Hard Bop. Some poets at this time, Leroi Jones (Amiri Baraka) for instance, were very close to jazz musicians socially, often writing about them and collaborating with them in various ways.

In Australia in the 1970s, there were a few experiments in improvised poetry in the free jazz scene, mainly those made by John Clare in association with the avant-garde jazz group, Free Kata, but those efforts don’t seem to have created a lasting tradition – in this country at least. Of course, free-styling rap performances (in the U.S. and elsewhere) have something in common with Clare’s improvised free verse – but, for all the rough iambic tetrameter of their rhyming couplets, it’s too much of a stretch, I think, to bring them into a jazz/poetry discussion at this point.

Although there has been a considerable renaissance in Australian jazz since the 1980s, following the incorporation of jazz teaching into the conservatoria (and later, more problematically, into the universities), there has been remarkably little interaction here between jazz and poetry over the same period. Many poets are familiar with, and well-disposed towards, jazz – and have a few key jazz albums (e.g. Kind of Blue) in their collection – but they have never had the desire (or the opportunity) to work with jazz musicians. It’s likely, too, that these same musicians have been suspicious of poetry in performance (though undoubtedly some read it – even write it – in private). They suspect, quite reasonably, that performance poetry is something of a ‘mixed bag’ and that it’s hard to find one’s way through to something comparable in quality to one’s own playing.

A successful example of such an interaction occurred in Canberra in August this year where the Chicago-born performance poet, Miles Merrill, collaborated with the Gai Bryant Quartet in a concert held at the Street Theatre. Merrill is one of the country’s most accomplished performance poets and Gai Bryant is a strong saxophone player in the bop and post-bop tradition. The music was, for the most part, closely arranged to suit the poetry performance and convincingly reinforced the various moods established by the poet. Once, a more ad-lib approach was used and this too (though inherently risky) worked well. The whole event was reminiscent of Charles Mingus’ 1957 album The Clown, which featured improvising spoken word artist, Jean Shepherd. It’s worth noting here too that Bryant’s group also played several pieces without the poet — implying perhaps that such collaborations have their natural limits. 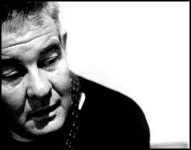 Another interesting and recent jazz/poetry interaction can be read (and heard) in Conjuror (extempore, 2012), a book/CD collection by the veteran Melbourne drummer, Allan Browne. Browne has had a long career in both traditional and modern jazz and has worked with a number of American luminaries including Milt Jackson, Mal Waldron, Phil Woods and Al Cohn – as well as Teddy Wilson and Jay McShann from an earlier generation. Though Browne has written poetry intermittently over the years, Conjuror is his first collection. The accompanying CD has seven tracks that engage the listener on several levels.

Most of the poems on the CD are elegies for jazz greats such as Wild Bill Davison, Art Hodes and Milt Jackson – and others less well-known, such as the highly-talented American guitarist, Emily Remler, who died in 1990 while touring Australia at age 32. In most cases, Browne reads or recites his poem at the beginning of the performance (sometimes broken up into stanzas with a short musical interlude between). The poems thus serve as an epigraph or prelude to the musical performance, which pays tribute to the musician concerned. Thus Browne solves the recurrent issue of the relative prominence of the two forms by allowing the poetry to set the parameters and then allotting the overwhelming amount of space available to the musicians.