In the work I (and sometimes fellow poet, Lynn Hard) have done so far with musicians including Bernie McGann, Carl Dewhurst, Eric Ajaye, Jonathan Zwartz, Alex Boneham, Damien Slingsby, Jarrah Jones, Luke Sweeting, Simon Milman and Mark Sutton, I have tended to strike a different balance. In a performance Lynn and I gave with the Luke Sweeting Trio (piano, bass, drums) at The Loft in Canberra in June this year we viewed the music as a support and an intensifier to the poetry rather than the poetry’s being an addendum (or introduction) to the music. Several of Lynn’s poems were written as responses to well-known jazz standards such as ‘Whisper Not’ and ‘Milestones’ and began with a complete chorus of the tune played first by the trio, followed by the poem which was timed to take up one or two choruses. On this occasion all of our poems were about jazz in one way or another – though I have performed with jazz musicians (eg. Eric Ajaye on bass) some of my poems on other themes with, I hope, equal effectiveness. 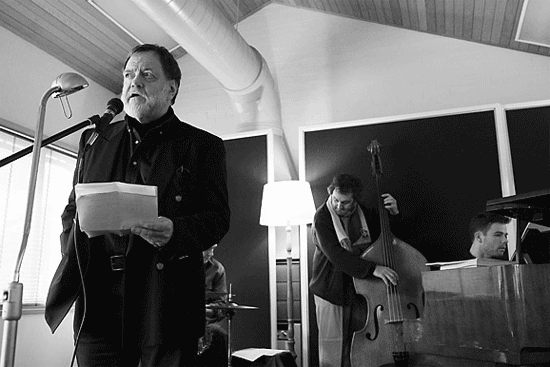 Similarly in the concert Lynn Hard and I did at Tilleys with Bernie McGann back in the early 1990s we started and finished the concert with his quartet playing alone. In everything else we confined the musicians to a more supportive role with either short solos between the poems or short musical improvisations in response to the previous stanza and so on.

For improvising musicians this may have been slightly frustrating since they had little opportunity to ‘open out’ over several choruses as they would normally. On the other hand, the poetry didn’t get lost in, or overwhelmed by, the music. Poetry is something a listener can’t drift away from without losing the thread completely. Music, being more abstract, allows the listener to be slightly lazier (if he or she is so inclined). This implies that, if there is to be a struggle between the two forms for centrality in the performance, it is probably better that the poetry should win.

In all these performances there has been some prior discussion with the musicians on the music to be used, a short rehearsal and then the performance itself. The music might vary from vamps on a certain chord or two, ‘free’ improvisations in response to the poem broken up into stanzas, blues in 4/4 at various tempos and so on. I have found such backing and interactions force me read at a more intense level than usual – and certainly in a more definitively rhythmic way. 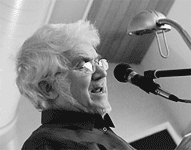 This raises the inevitable (and perhaps fundamental) issue of reconciling the two sets of rhythms involved – that of the poem and that of the music. Since most of my poetry in recent years has been strongly iambic, I find I’m inclined to align the poem fairly strictly with the (generally) 4/4 or 8/8 rhythm of the music – assuming that rhythm is laid down by the musicians and not out of tempo, for instance.