‘Seeking to be here, doing this’: Po-Essaying into Agro-ecological Thinking 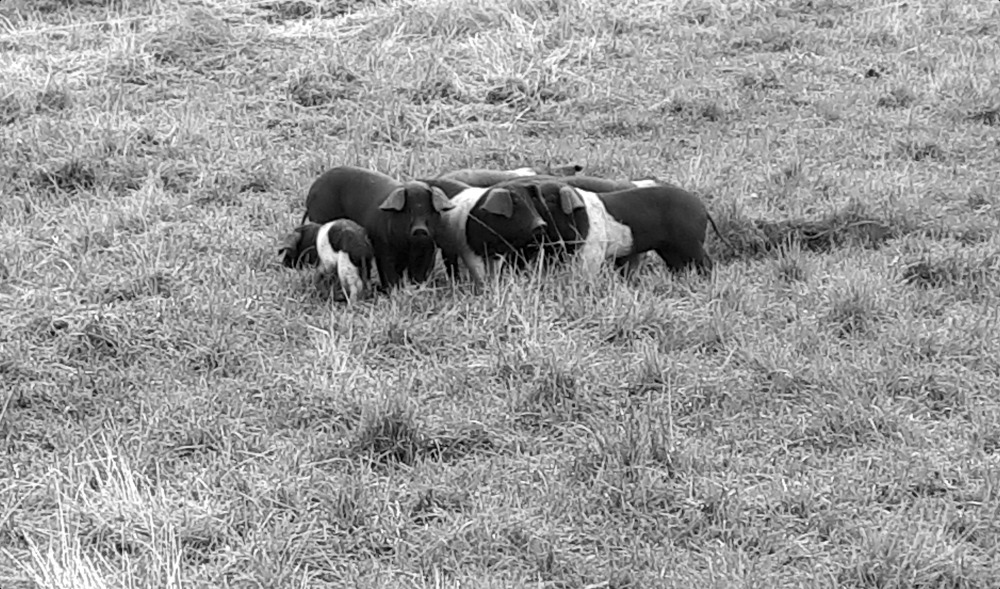 A Life in Common with Nature

Her name is Betty. We named her the day I saved her from certain death for a certain later death. Her tiny form trembled alone in the middle of the soggy paddock, while her school of siblings darted warmly further up the slope. Her mother Missy grazed diffidently near the fenceline. I knew Betty wouldn’t survive the night if left to the elements of a central highlands winter.

One eye on Missy, I legged over the ringlock, avoiding the shin-height electric on the uphill side, and strode purposely toward the shivering runt. Anticipating the sequence that would follow, I snatched the piglet, spun around as she squealed, and snapped my gaze back towards Missy. Her giant head swiveled to the alarm, and her huge Dumbo ears frilled back as she launched towards me to protect her neglected progeny. I bolted for the fence. It was a race between two middle-aged mothers to see who would save this pig of ours. A former champion high school hurdler, I leapt the fence centimetres out of reach of Missy’s murderous canines, landing with a grace I no longer possess, and a final leap off the slope to the road below, piglet tucked snugly in my forearm.

In between cooing over the dear little life in my arms on the walk back to the house, Chris was grappling with an epiphany.

‘This isn’t just work for you, a way to make money, is it? It’s like, it’s just living. It’s just how you live, and you also make money from it.’

I smiled sagely, ‘yes.’ We’ve hosted this epiphany before.

—
‘I’m afraid to put the shovel in! Every time I do I chop a worm in half, there are so many worms in these beds!’

And so we don’t dig unless we have to. We build our garden beds ever upwards, chopping and dropping most annuals as they finish and covering them with straw or woodchips to break down in situ, building ever more humus and fertility for next season’s crop. We cannot see many of the miniscule lives we work hard to promote, what looks like a slurry of shit, whey and molasses with a smattering of bonechar poured on the garlic beds is full of lively bacteria to invisibly nourish our crop. The healthiest specimen of each vegetable species is left to go to seed, carefully harvested, dried or fermented as it needs, and stored away for next year in the finger-guillotine treasure chest Stuart built for Oscar’s first birthday.

—
Geoffrey was the final survivor of the catastrophic error that saw the death of 16 cattle. Over the months after the incident, while he appeared energetic along with those who had not developed the extreme case of acidosis that killed the others, he slowly lost condition. One day we realised just how thin he was, ribs prominent through his shaggy winter coat. Figuring his rumen must have been too altered to readily absorb nutrients since the acute illness, we harvested healthy gut bacteria from fresh cow pats and laced them in hay. I rang a wise friend who practices naturopathy for livestock, who recommended steaming the hay to increase its digestibility.

Geoffrey was accordingly moved from the big herd to Clarabel’s paddock for his daily treatment, and the gentle Jersey was glad to have a herd of one to boss around. Every day for a fortnight Marie dutifully steamed the hay, collected a fresh dose of healthy cow pat from Clarabel, mixed it through and fed it to the gaunt but handsome steer. After a fortnight, the treatment stopped, but Geoffrey stayed with Clarabel and was given an extra ration for several months. By year’s end, Geoffrey was a stocky punk, tossing his head at passersby in anticipation of a feed and acting like an animal that still had his balls intact. He was returned to the big herd not long before Clarabel gave birth one wild night to the eponymous Stormborn.

About a year after we started nursing him, Geoffrey went to the abattoir like all the others. His flesh became meat that nourished us and the community of about 250 people we feed every month, his bones transformed into broth before pyrolisation into bonechar to feed the garlic and vegie crops and sequester carbon all at the same time.

—
Did you know that mycorrhizal fungi help trees communicate with each other underground?

—
Stuart has single-handedly planted thousands of trees on the farm. He does it for his mental health, and to connect the life in the soil with the life in the sky, he says. Dozens of other young, emerging, and erstwhile farmers have also planted trees on our unceded patch of Dja Dja Wurrung country during their time with us. We don’t think of tree planting as an ‘ecosystem service’, we feel trees as lungs, corridors, shade, solace, life.

There’s an arboreal circle in one of the lower shelterbelts that holds a story about those who planted them. The trees are closer together than others further along. Every time we look at them, we picture Leif, Fernando, and Amy plopped picturesquely on the ground, discussing life, the universe, and everything as they peripherally remembered to do the job they were there to do, nourishing traditions all round.

—
The pigs are moved frequently to ensure groundcover is preserved year-round. Ground that becomes compacted and devoid of oxygen and humus cannot support microbial life below its surface.

Stuart and I would like to be buried on the farm.

—
The first raw fare I learned to ferment was meat. Salami making is now an annual tradition on the farm, and we teach about half a hundred enthusiasts the old art each year. The science and magic of meat, salt and time are enacted in defiance of today’s dangerous orthodoxy of sterility and selection of the ‘right’ bacteria. Diversity and good hygiene are what we’re about. No freeze-dried starter cultures that give commercial salami its trademark sour tang in the hinge of your jaw, and no nitrates or nitrites that are deemed safer than the one in a million chance of contracting botulism – remind me of the stats on cancer risk from processed meats (or is it their preservatives)?

Next I turned to vegetables, rather foolishly astonished to learn that if you apply the same principles to vegies, salt, and time, you will also ferment them. Kimchi, sauerkraut, pickles, garlic, chili, you name it, we ferment it, fomenting competence in our communal kitchen.

The last frontier was cheese when Clarabel joined our menagerie. After calving, we were awash, even while tandem nursing Stormborn. What else to do with 20 litres of raw milk per day but learn to make cheese, on repeat every two days for the next eight months, stirring the curd while reading for a PhD – fostering the native microbes with one hand, and neural pathways with the other.

Prior to Clarabel we had only made paneer and acid ricotta, plus one unpleasant and sterile day making mozzarella under the stern guidance of a friend studying pathology. Reading David Asher was a revelation – making cheese can be just like making salami! Work with the naturally-present bacteria and provide hygienic conditions to support healthy diversity. We don’t use starters – not even kefir or clabber – just fresh, raw milk held at the temperature and moisture levels to promote the growth of the desirable cultures.

Like the lively bacteria that invisibly nourish our crops, there are others who transform raw meat, fruit, vegies, and dairy into a range of uncommonly delicious gustatory delights.

—
Apalech man Tyson Yunkaporta says that humans are here to look after everything in the soil, the sky, and all that’s in between. Some of it we eat. Some of it eats us.

There are people living in cities who may never have cause or opportunity to touch soil. The only pigs they’ll ever know spew inanities on daytime tv or come in shrink-wrapped plastic from the supermarket (but they try to pretend these were not once alive, a breathing, feeling animal raised in a shed with thousands like it, whose flesh they consume with coffee over witticisms recalling the cause of this morning’s hangover). ‘Oh, I’m a flexitarian,’ some say. ‘The only meat I eat is chicken and sometimes fish because I’m worried about climate change and over-fishing. I really don’t get how you can eat an animal you knew.’

How can one be a custodian of the land, the sky, and everything in between if her only interaction with life is wrapped in plastic?

—
I find it harder to eat an animal I didn’t know than one I did. The act of consumption is consumed with questions. Where did it live – in a shed or on green grass under a blue sky? What was it fed – grain from horizons of lifeless monocultures trucked in specially for a carefully formulated diet, or grass and surplus harvest deemed unfit for humans? If it was raised outdoors, what was the quality of life for the microscopic critters under the surface of the soil? Was there sufficient diversity of grasses, shrubs, and trees to support the lively lives and livelihoods of other critters above the surface or was it a green desert too vast for wild animals to make safe passage? Who raised the animal on my plate? Was it a faceless corporation propped up by contract farmers who own little but the debt and risk of the system or a farmer with a name and a face and a custodial ethic for the land and other life in her care? Most likely, it was a farmer with a name and a face with a list of priorities shifting with every variance of the price he can command in a commodity market, so while he might care about the same things you do, capitalism is the captain of his decisions.

—
Big decisions should not happen in board rooms. They should be taken collectively by those who are guided by their relationships with the land, for it holds the answers to all the questions of our time.

Now, what’s for dinner? Is it Betty? 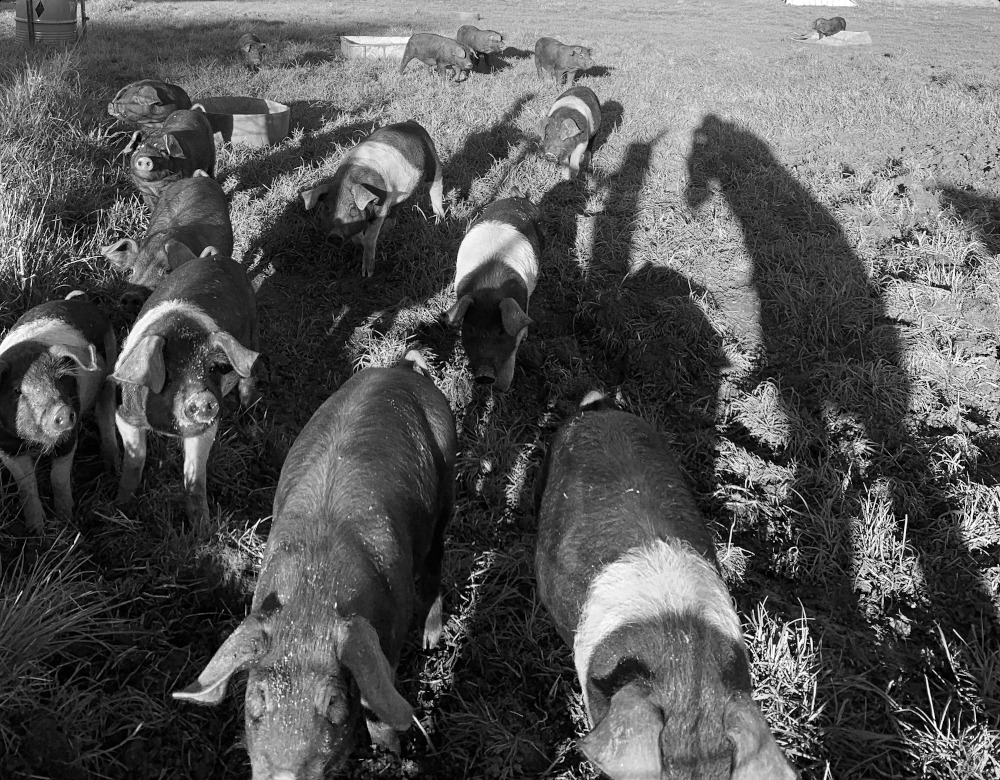 Pages: 1 2 3 4 5 6 7
This entry was posted in ESSAYS and tagged Jane Hirshfield, Jay Parini, Jessica L. Wilkinson, Matthew Zapruder, Rachel Blau DuPlessis, Susan Howe, Tammi Jonas. Bookmark the permalink.
Jessica L Wilkinson has published three poetic biographies, Marionette: A Biography of Miss Marion Davies (Vagabond 2012), Suite for Percy Grainger (Vagabond 2014) and Music Made Visible: A Biography of George Balanchine (Vagabond, 2019), highly commended for the Wesley Michel Wright Award. In collaboration with composer Simon Charles, Marionette was developed into a performance work of voice, music and sound; they released an album in 2018. Jessica is the founding editor of Rabbit: a journal for nonfiction poetry and the offshoot Rabbit Poets Series of single-author collections by emerging Australian poets. With Bonny Cassidy, she co-edited the anthology Contemporary Australian Feminist Poetry (Hunter, 2016); and with Cassandra Atherton, Memory Book: Portraits of Older Australians in Poetry and Watercolours (Hunter, 2021). She is an associate professor in Creative Writing at RMIT University, Melbourne.


More by Jessica L Wilkinson on Cordite Poetry Review →
Tammi Jonas is an agroecologist in principle and in practice, farming heritage-breed Large Black pigs, cattle, and garlic with her bricoleur husband Stuart on the unceded lands of the Dja Dja Wurrung people in the central highlands of Victoria. She is president of the Australian Food Sovereignty Alliance (AFSA), co-editor and co-author of Farming Democracy: Radically transforming the food system from the ground up (2019), and undertaking a PhD at the University of Western Australia on the biodiverse and decolonising practices and politics of small-scale farmers, and the impacts of the state on their efforts. She is grateful to have at last fallen for a new muse, the Land, having abandoned her abusive capitalist muse a decade ago.