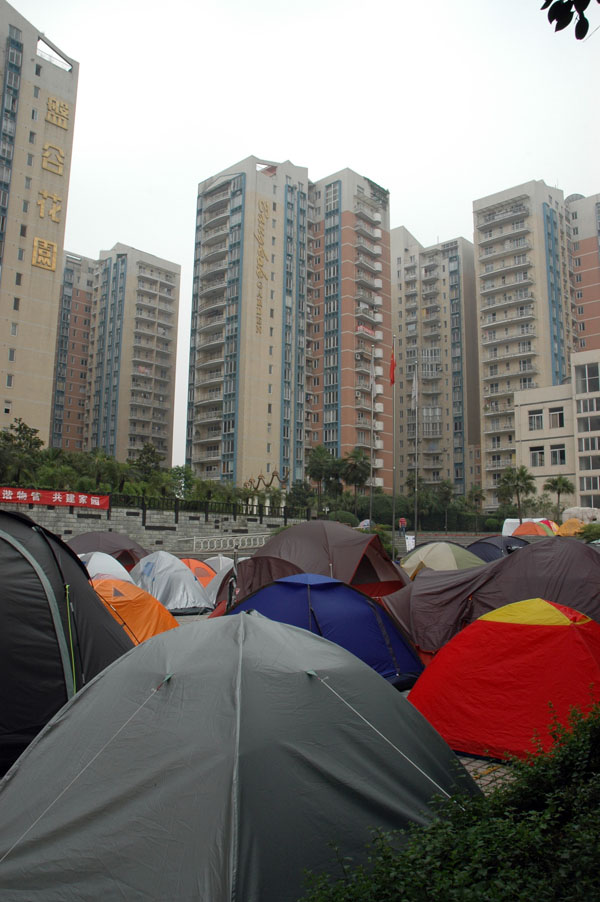 Five weeks and I have still not visited Mao's statue, which stands at the heart of Chengdu's First Ring Road. On the map in one of the city's English language magazines his presence has been reduced to a vector-based outline, a warm-grey fill.

My taxi pulls up to the main gate of Xīhuá Dà Xué (West China University), just in time. We are some 20 km – a 45-minute drive – northwest of the city centre, past the marble statue district where pair after pair of stone lions stand guard among a cross-cultural mix of classical figures, past the public park announced by the absurdity of an Ionic colonnade … I'm here to give a seminar at the invitation of Professor Xiang, Director of the University's Australia Studies Centre, which is marked by a small bronze plaque above a door in the Foreign Studies Building. It reads: Australia Studies Centre.

Over dinner it transpires that the Centre consists entirely of students and lecturers reading the twenty-odd Australian novels that Professor Xiang photocopied when she was in Australia on an Australia-China Council grant. The focus is Australian women novelists. Later that week, I collect my bound photocopy of Poems of the Late T'ang, translated by A.C. Graham. A friend arranges an orange-covered photocopy of Sichuan author Hong Ling's Summer of Betrayal, which has been banned in China.

Weeks later, I consider about what to do with my copy of Yiyun Li's A Thousand Years of Good Prayers, a collection of short stories examining the lives of outsiders in contemporary China. She refuses to have the book translated into Chinese for fear that she will be branded a dissident and never be able to return – disastrous if the US government rejects her residency application.

This is the first time I have lost line of sight to other human beings: the taxi slips into a one-way underpass and maybe for 10 seconds: no pedestrian or vehicle in front of us, just a stream of neon lights on the tunnel roof; in the distance: a mouthful of day.

I have been warned by a friend who is afraid of flight but travels more than most to check a website with all Chinese airline safety records. I content myself with verifying the make and model of planes used for the flights I book. And so: Flight CA 427, a late model Airbus 319 – we begin our descent, pushing through the bowl of clouds that has covered the earth since the edge of Guangdong province where haze makes a mockery of the senses.

We plunge through light-grey and white and grey clouds; each minute I expect my new if temporary home to emerge into view; I am here for four months, an Asialink Literature Resident. Finally, only 200 metres from the ground, a few kilometres from the airport: we break out and roar over wet fields, the gradual build-up of the city, roads congesting to a centre.

My first night is spent attending a session at my host organisation the Bookworm's international literary festival: an author lecturing about chance in French. A week or so passes Ouyang Yu and Nicholas Jose arrive for their talk – on writing across Australia and China. Over lunch OY calls up a local poet to see if he has time to meet me while I'm here. Not straight away, as it turns out: he's busy organising a national poetry festival a few counties away, with poets from across the country flying in for the weekend. Not an expat at the Festival, myself included, knew about this.

Bill, a friendly Canadian academic, hands me his business card: Foreign Expert. His office is in Sichuan University's Foreign Experts Building and he lives on campus in the residence for foreign experts, nicknamed 'The Panda House'; it houses white-skinned creatures whose guests must register with the front desk if they are Chinese. No guest is allowed to stay past midnight. Local academics rarely fraternise with 'foreign experts', except at official functions – though this culture differs at other universities.

Kate, a linguistics student, tells me that if you are a local academic and find yourself lecturing to a room of foreign students, you should make sure to lock the doors tight before you start speaking your mind.

When Tibet flares up and protestors and looters take to the streets of Lhasa, no one knows what is going on in Chengdu. The web of rumours drawn across the city snaps tight – no two people give me the same answer: was the Han couple stabbed in the Tibetan quarter actually attacked by a Tibetan? Did a bus explode at a station near the First Ring Road? Was a bomb defused? A friend of my friend's uncle saw a photo on the internet. Some of my friend's friends are scared; parents tell their children, who have come here for study, to pack their bags and head home for the weekend; a woman flying from Beijing for the Literature Festival cancels her performance due to 'travel advice'.

Chengdu: located in a basin that traps clouds and smog alike – not even a hint of sun for a week. The moon appears just once, after three weeks: full, amber-toned, not quite distinct, floating above the steady neon signs of the twin Lippo Towers, just south from my hotel on Ke Hua Bei Lu.

I arrive back in Chengdu a week after the 12 May Wenchuan earthquake – 8.0 on the Richter scale – whose epicentre was a mere 80km to the north. At the time, I had been climbing a mountain in Qinghai Province, the last leg of a six-week trip around China. Soon, concerned SMSs from friends in Australia and China were floating in. Away from the internet, the only information I could glean was through the utter foreign-ness of Chinese news broadcasts.

Now, a month later, Chengdu has changed indelibly: people, scared of aftershocks, are sleeping outdoors even though no building here was destroyed; the Bookworm has mutated from a wàiguórén bookshop/restaurant to an earthquake relief centre, coordinating donations and aid. And then the ruin of cities, villages and lives to the north, which I have avoided for fear of being a disaster tourist. Suddenly the significance of my translation project begins to ebb; I am left stranded, clutching a suite of poems, so close to this disaster, so entirely remote.