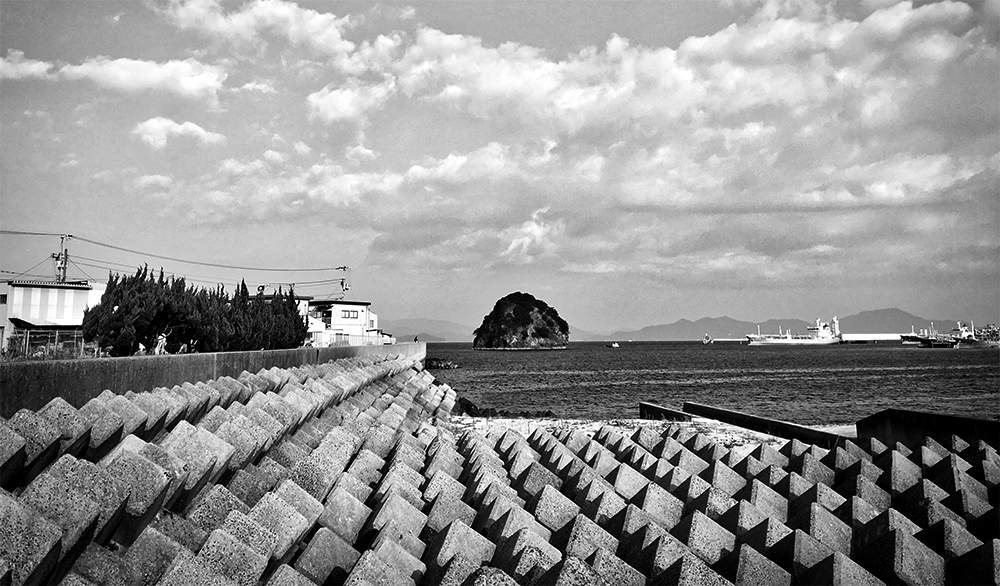 The next day we walked thirty two kilometres from Yuki to Mugi via the Skyline Scenic Route over the impressive cliffs towering over the sea. Our trail notes said there was a hut in Mugi with a table and a toilet. Where we arrived we found an A4 sheet inside of a plastic sleeve pinned to the wall with the words NO SLEEP PLEAS. Very tired, we set the tent up on the sharp quartz rocks between the hut and toilet donga. A woman arrived in a red Mercedes, parking across the driveway and leaving her vehicle idling. Like a pillbox the hut had slots in the walls and I watched her move through the hut – seemingly unaware of the backpack and mattress on the concrete floor. I stood in the dark watching – all this took place in seconds – hoping she would only check the hut and return to her car. She turned the corner and found me trying to remember how to say ‘good evening’. First thing she said was ‘oh tent’ and then a bunch of other words I didn’t understand. Rosie, sitting in the vestibule said in Japanese that she was sorry she didn’t speak Japanese. The woman then made a sleeping gesture and crossed her arms in an X across her chest, checked that the doors on the donga were locked and in the process tripped over two of the tent pegs, one after the other. Rosie made a sympathetic noise while I shined my flashlight to the ground. The damage was done, the woman was annoyed. The woman came up to me and pointed at the light and then repeated the X across her torso and then a sleeping gesture. I said ‘yes’ and ‘thank you’ in Japanese and she kept talking and talking and we couldn’t understand what she was saying and Rosie and I kept saying ‘thank you, thank you, thank you’. For all we know she was telling us ‘don’t camp here, you can’t sleep here, go somewhere else you stinky foreigners’, and all we could say was ‘thank you, thank you very much’. Her possible return with the police to demand we leave kept me awake throughout the night. We left as early as possible to avoid seeing her when she returned to open the toilet donga.
*

That night we camped in a concrete Shinto compound next to a shrine with views of cargo ships and a small fishing vessel bobbing in the Pacific. In performance every kilometre of our twenty five kilometre walk that day, eagles circled the sky and their dark arrow-like shapes stood against the white moon, jumbo jet vapour and cirrus clouds. By early evening we scouted camp in a concrete undercroft, of an abandoned high school. The building appeared to have been deserted some five to ten years before and unlike many of the other abandoned buildings in the area this building was spared being overrun by vegetation. I went looking for water. Peering into the salt-peppered windows, I found dust covered desks facing the blackboard, shelves full of books, and world maps pinned to walls. A green swimming pool could be made out through the interior window. In one room, floorboards bent and swollen, I thought that if you walked across the floor you would fall in and crash to the basement. A French walker or two had written ‘Salut! Frenchie 5/5/2014’ on the blackboard. Right below, in different script, another wrote ‘Encore Francois 4/5/2016’. White chalk stood out boldly against the green board as if the letters were written yesterday.

I found a tap and turned the handle when a brown sludge squeaked out for five seconds before water ran clear and cool and drinkable. We never stayed there. Paranoid from the encounter with the woman in the red Merc, Rosie and I agreed to go and sit on the tsunami wall and watch the ocean for a while and wait for the last of the dog walkers to go home so we could set up camp without audience. We started walking again and decided to keep going. Between waves of traffic, governed by the red and green lights that hung on wires, my ears registered no noise, no sounds. Not birdsong. If I closed my eyes and breathed deeply I could pretend I slept in five or ten second bursts standing on the perforated concrete gutter panels at the side of Route 55.