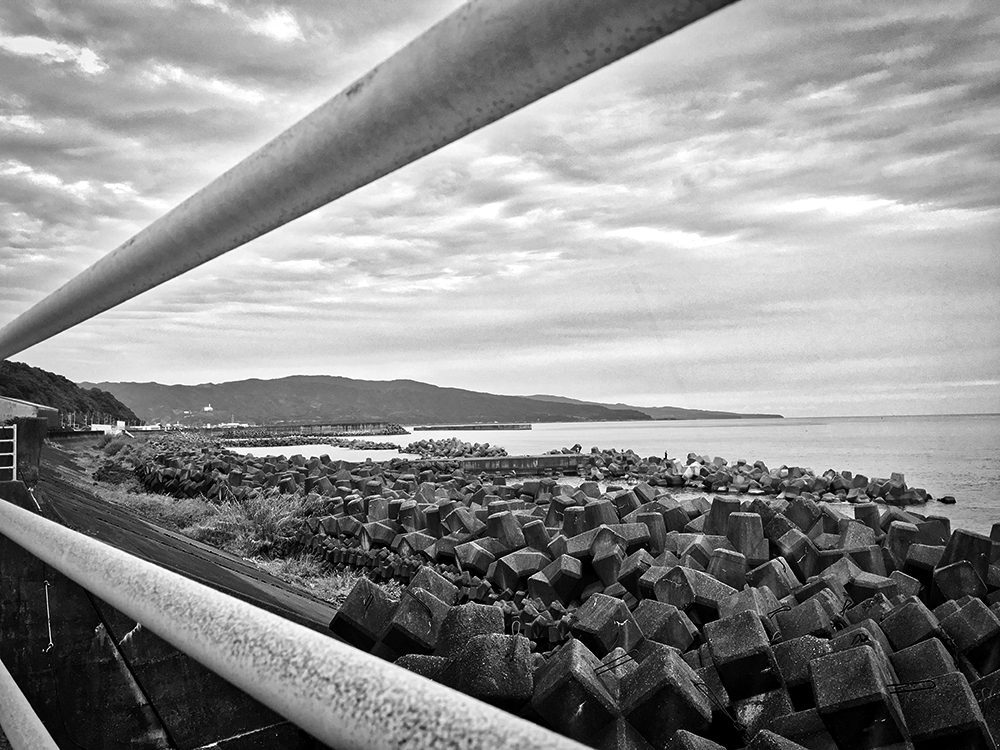 A long day of road walking out of Tokushima. Twenty-five, twenty-six kilometres including five hundred metres of gravel before and after Temple 18. Rosie and I left the hotel at about 7:15am and walked along one of the main arterial roads. It was like walking from Perth to Armadale along Albany Highway during peak hour. Our main respite from the fumes and heat was a muffin meal at McDonald’s. We kept an eye out for a supermarket because we had been warned that there were no shops for three nights after Temple 19. Unable to read the billboards, we kept approaching what looked like a supermarket but they were either an Officeworks or casino. On the other side of a major intersection, with huge dump trucks idling, an industrial warehouse came into view and inside was the Food Garden where Rosie bought some sick tasting crab cheese sausage that we tried at a worker hut rest stop about eight kilometres later. Imagine a miner’s donga open and available to anyone passing by to help themselves to coffee and snacks. A couple of other Henro’s stopped while we were there. One tidied up and reorganised the slippers in the small vinyl entrance. A chatty guy arrived as we were leaving, taking to Rosie and giving her stories of life in the time I visited the port-a-loo out back.
*

After reading the Heart Sutra at Temple 19, a nondescript mansion from 900 A.D., rain started and continued until we reached Katsura michi-no-eki. Because of the minimalist sandals I was wearing, my feet were killing, and I complained to no end despite the fact pilgrims are not meant to complain. The wooden Henro Hut was too exposed and noisey to sleep in, so Rosie went in to ask about postcards and where to camp. The ladies inside said we could sleep on the wooden verandah or the grass patch out the back of the building beside the air-con ducts, the septic tank and drain. Too footsore to continue, we argued about whether to buy dinner or use food we carried and then set the tent up on the verandah looking out over the concrete walled river that flowed down from the mountain we would climb the next day. I found a small step ladder and unscrewed the fluoro light that was shining into the tent and attracting a thousand mozzies. About to sleep we heard huge explosions from the direction of the mining donga we had stopped at earlier in the day. Deep dynamic thuds vibrated the earth in rounds, the cacophony coming at us from distant miles. There must be an agreement, we discussed, between the villagers and the miners to blow up enough earth, enough of the mountainside to keep the workers occupied overnight. As we packed up the tent the next morning more explosions filled the valley for a quarter hour.

Temples mark the focal point for the walk. There are reminders you’re on an ancient pilgrimage all along the path. Small statues with red beanies or scarves sit in the leaves beside the track. Ribbons and tags hang from trees. Thousands of years of human history are embedded in the landscape. Where a dilapidated shrine exists there must have once been a Buddhist village. The hamlets we walk through are scarily quiet. Agriculture is intense as each vegetable, fruit or wood type is allocated a small patch to grow. We found an orchard of kiwi fruit, not yet ripe and too hard to eat. That day Rosie and I walked twenty three kilometres over two big hills and still finished before 5pm. There were other Henros around and for the first time we felt like we were part of a group of pilgrims; seeing the same faces, overtaking one another, praying together, sharing a concrete park bench. Seeing all the tired Henros at Temple 21, eating packed lunches from the bed and breakfasts. As osettai, I offered everyone a shortbread biscuit, and as pilgrims they could not refuse because osettai is an offering to Kobo Daishi, the deity who established this walk in the 9th century. No one wants to inconvenience or irritate. There was a chatty woman wearing beige pants and a beige shirt that said ‘United States of Paradise’. She had a wooden staff with a small bell hanging from the top and the top half covered in plastic to stop her hands getting blisters. She said she walked the trail every year.