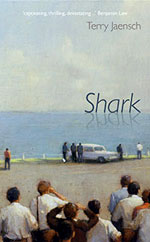 Okay, I’ve teased this analogy out far enough. Throughout this so aptly named book, Shark, Jaensch throws out a bravery, or maybe a bravado, above a vast underlying vulnerability. This is perhaps most obvious in the two orphanage sequences – the boy is fidgeting but the man looking back on his boyhood won’t flinch as he dismisses it as ‘equal parts adrenaline and tinea.’ Continually we are brought back to the proposition that the boy ‘mixes well’ … a relentless, largely joyless survival. The story of the struggle to get a television in the dorm is engrossing, progressively heartbreaking, desperately optimistic and brutally resilient.

In ‘Dead Cow’ the children poke a corpse with guiltless curiosity. It is immediately followed by ‘Mouse’ where another body (real or figurative) is treated with great reverence. This is simply what the poet does … no apologies, no explanation. But this dualism adds a real sense of veracity to the collection. Life is no account book, it will never balance.

Jaensch returns to the theme of fathers throughout this collection. Early on the poet’s father is publicly dismissed with his ‘mental condition’. Expunged from the narrative of growing up, we confront the figure again in ‘Entering the Atmosphere’– a visit to the father dying. There is so much vulnerability here – ‘the visit was bound / to rip the guts out of one of us…’ But a terrible restriction too – ‘Cancer doesn’t let us get a word in edgeways.’ The protagonists exist too far apart, then at the end:

This is followed by the title poem of the book, ‘Shark’. This is a breathless read in the voice of a TV reporter who on one level tells of the miraculous survival of the boy who emerges from the sea intact after his father succumbs to a shark. But the child is naked, is there some subtext of abuse? Was Father the predator ? Son appears from the furrows, not the sea. Much remains unexplained, did perhaps the Son kill Father? In tragedy other parents are led the use of the word love. ‘Town’s children will cling to their fathers tonight’ but this is nuanced too – a cloying or even inappropriate action? ‘Bones of paternity’ are very much placed ‘in the shallows’ and the reader is left disturbed and peering intently beneath the meniscus.

Throughout Shark language is clear and pitiless allowing maximum focus on the ambiguities, pain and ruthless survival – ‘Cheek’:

This stringent clarity works so well in creating characters like the odiously certain character in ‘Holding Court’:

The book design is a delight, Transit Lounge has made this publication an artefact of beauty. The work inside is a conflagration of worry and wonder.

This entry was posted in BOOK REVIEWS and tagged Les Wicks, Terry Jaensch. Bookmark the permalink.
Les Wicks has toured widely and seen publication in over 350 different magazines, anthologies and newspapers across 28 countries in 13 languages. His 13th book of poetry is Getting By, Not Fitting In (Island, 2016).