Nonetheless, a true reading of Fitch is not possible linearly. These poems are not catalogues that mimic Rimbaud’s (much-debated) order; the 42 inversions are purposely jumbled and the titles altered, for example, ‘Marine’ is transposed as ‘Maroon’. These poems filter and slip on Google Translate, as Fitch acknowledges at the back of the book, and what comes across is a sense of echo through which Rimbaud glitters, as Fitch’s ‘i’ simultaneously becomes an entity intrinsically distinct. 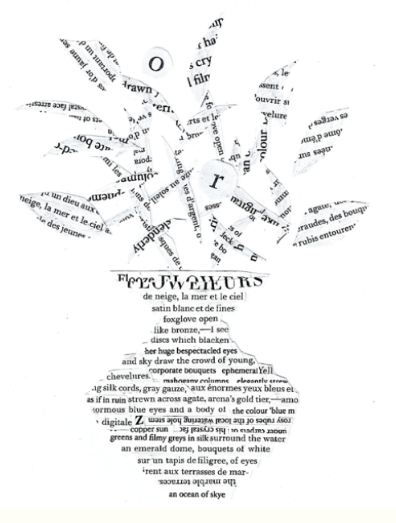 While this is not the poem Fitch used as his redaction of Rimbaud’s ‘Fleurs’, it is an excellent illustration of his process and use of purple prose; extravagant, ornate and flowery to the point, breaking the flow of the text and drawing excessive attention to itself. In this concrete poem we are privy to the fullness of Fitch’s ‘ephemeralYell’, complete with collage, bilingual interruptions ‘de neige, la mer et le ciel [of snow, sea & sky]’ and excessive use of colour to capture the surreality of Ashbery’s revisions.

As a collection, we find poems that cross boarders, twist down the page and reflect their title, for example, ‘On Gwass’, which takes the shape of thin, singular bristles of grass trailing down the page towards the glade: 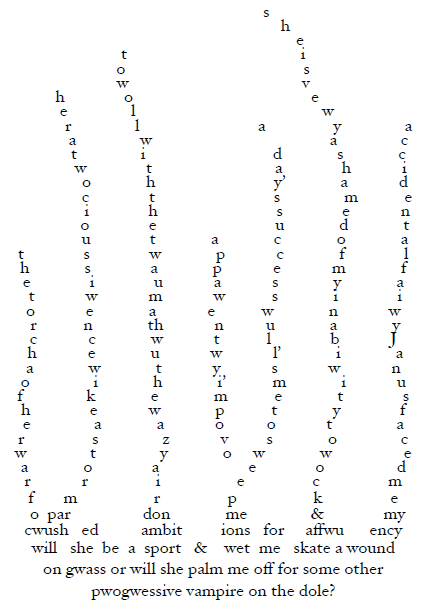 Through this imagery, we can see that each poem figures as a part of something bigger, Rimbaud’s language oversaturated with visual and textual mirage, to the purpose of unearthing a land Down Under that is exploratory in tone and ‘i i in metaphysical travels’. In ‘DEVO LUTIONS’, perhaps my favourite poem of the collection, we are again swept ‘up in the polar rubble’ of Fitch’s inversion and weighed against it. A play on the flow of homophones in ‘Devotions’, society is the subject of the gaze, and the silhouetted form of previous poems uneasily warps and spirals towards us. Unceasing double acts of inscription offer up two re-presentations of ‘DEVO LUTIONS’, as the title breaks the page and insists on being considered in isolation: Devo, and Lution. As we delve deeper into Devo we are positioned to see how society has become trapped in a cyclic religion of ‘of self-worship’, one almost entirely in the virtual as ‘i timely     i    meme     i end’ and perhaps, as the acronym DEVO suggests, devastating ends, ‘air at i price i’s violent’. However, the ‘i i i i i i’ continues to move in centripetal motion and suggests we are not entirely lost, as we traverse the page and coalesce with ‘cc’ to merge into the spoonerism, ‘I see’: 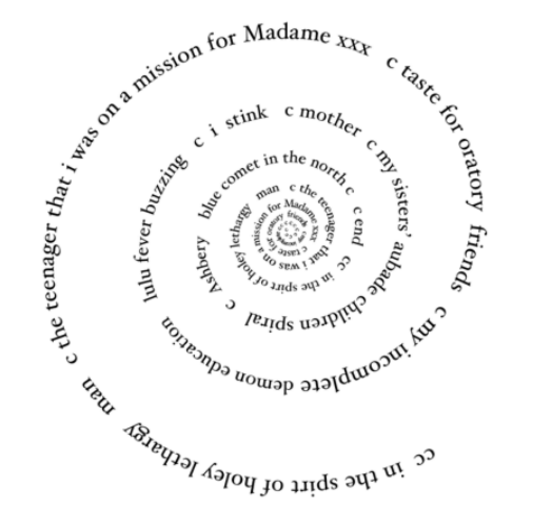 This doubleness emphasises the disharmony and fragmentation of societal existence across all time periods, whether it divides into French bourgeoisie, or the present. Fitch continually observes postmodernity and frames The Bloomin’ Notions of Other & Beau as an inscription onto the societal body of the present and past, one we have the power to change, reliant on the possibility of revo-‘lution’. In the end, ‘DEVO LUTIONS’ is more than an act of resonance, it is consistent throughout the entire collection, positioning the reader to see their own ‘incomplete c c c c c c c c c c’ and transcend the limitations of a modern ‘daze of body and soul’, self declared as Genius, or is it ‘GEN Y’?

In the end, distinct from other reviews, I chose not to refer to Ashbery’s translations; my singular purpose was to consider how the ‘I’ Rimbaud left us with in ‘I is an other’, had and has the power to illuminate a self-sufficient poetry, a system of signs that is and was without reference beyond the original spore. In The Bloomin’ Notions of Other & Beau, Fitch does just this. Undeniably distinct and uncannily familiar, the fragments imposed onto Rimbaud’s original construction speak for themselves; they do not rely on the precursor text. It’s conceivable that Fitch could have invented a similar sequence without Rimbaud’s influence, but the conversation he carries out with Ashbery’s translation makes it a far more powerful work than if Fitch had attempted to write it alone (‘c Ashbery’).

In Edwards’ and Fitch’s collections, one can observe a similar and continued dialogue of intent that is determined to dive into the language of the past and ascend with an idiolect wholly its own. Their originality, keen ability to listen to language and play with meaning is a true marvel, but it’s their translations/transformations that challenge and defy expectation, as compounded in the third stanza of Fitch’s final poem, ‘GEN Y’: