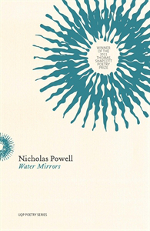 Winner of the 2011 Thomas Shapcott Poetry Prize, Water Mirrors is Nicholas Powell’s first full-length collection of poems. Structured around an interweaving of landscapes – some real, others dreamed or imagined – the forty two poems that lead up to ‘The True Map’, the book’s final poem, can read as an exercise in cartography. Here are the final two stanzas:

In this sense, Water Mirrors is an apt title. The book overflows with literal ‘water mirrors’: a pond in the first poem, a bay in the second, the diving ground of a cormorant in the third and throughout the rest a preponderance of lakes and seas. Taken together, the title words appear in only one of the book’s poems, ‘The Other Shore’:

A second aspect of the title is drawn out: that water mirrors things, reflects them and repeats them. At times we see these ideas textually in Powell’s poems (the repetition of ‘reach’, for instance, in the extract above), but more often they are explored through subject matter and image:

With a change of ‘approach’ – a coming closer, an approach – the second half of Powell’s poem offers a correction (or at least an alternative) to the initial reading of Hopper’s painting. The relationship between vantage point and perception/interpretation is a preoccupation that continues throughout the poems that follow. ‘Slower Motions’ and ‘Through a Night Lightly’ (after the Ingmar Bergman film Through a Glass Darkly) for instance, two poems placed towards the tail-end of the book, are driven by cinematic imperative: ‘Swivel to Sweden’, ‘Rewind a century of winters’, ‘Enter god as omnipresent spider’, ‘Pan to the sea’. The ‘camera eye’ here replacing the poetic eye/‘I’ which focalises most of Powell’s other poems.

‘Looking’, Powel writes in another poem, ‘impoverishes me slowly’ – that familiar trope of the ‘I’ humbled by observation of the world beyond itself. Although Powell’s meditative tone is mostly well balanced, it can, at times, express a wonderment that falls flat or feels forced. In ‘Clouds’:

Amongst the most memorable poems in Water Mirrors are those that concern themselves with love, like ‘Wild Apples’, ‘Toes’, and ‘Poem Hotel’. Lover and loved, ‘I’ and ‘You’ – these binaries form one of the most productive ‘mirror’ pairings in the collection, offering distorted or negative reflections rather than ‘true’ renditions. In the same way that the archipelagos, islands, islets and isthmuses that are scattered throughout Water Mirrors are inversions of and counterparts to the book’s lakes, ponds, and rivers, so too the intimate and grammatical landscapes of ‘I’ reflect those of ‘You’, and vice-versa. The information contained in the ‘true map’ the book seeks in its closing might well be a way of reconciling or negotiating such disparate landscapes.

Although sometimes I couldn’t help wanting Powell to explore ‘stranger terrain’ more often, like he does in poems like ‘Mouth Full of Flowers’ (‘Nude sits on nectarine. Eats huge fruit./ Opens fruit unknown by pressing breasts together.’), Water Mirrors is nonetheless an enjoyable read. In particular, the subtly orchestrated shifts between what Justin Clemens has called the ‘domestic and cosmic’ in Powell’s work, add to the pleasures of this thoughtfully put together collection of poems.

This entry was posted in BOOK REVIEWS and tagged Claire Nashar, Nicholas Powell. Bookmark the permalink.
Born in Sydney, Claire Nashar lives in Buffalo, New York, where she is a PhD candidate at the State University of New York.